The War of the Worlds: The Immersive Experience - Sci-fi Event 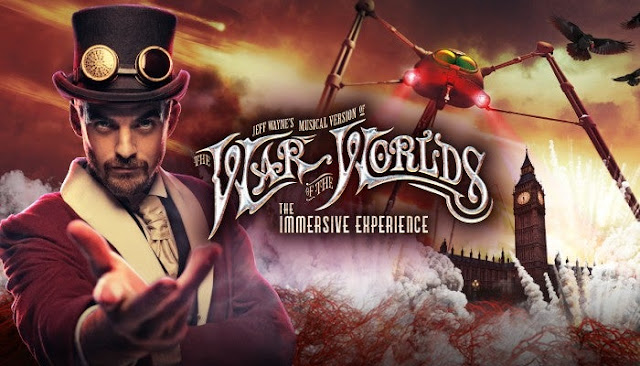 A week last Sunday I had the pleasure of heading to London to visit The War of the Worlds: The Immersive Experience. I have long loved Jeff Wayne's musical adaptation of the classic H.G Wells story and so was happy to see how this experience would pan out, especially when it has gotten such good reviews. The building was located a short journey from the subway station and was easy to find despite the building being covered in scaffolding. It was in the same area of London as the iconic gherkin building, as well as the Monument and the Tower of London.

It all begins in The Spirit of Man bar, which serves both food and drink. While we were waiting for our 15:00 slot my dad ordered an expensive cocktail called a 'Martiantini'. This green drink may have been expensive (around £12) but was really nice tasting. There was a fighting machine in the bar and every so often smoke would shoot out from it, while the decor was all steam-punk in style, lots of brass, and paintings on the walls that were War of the Worlds artwork. 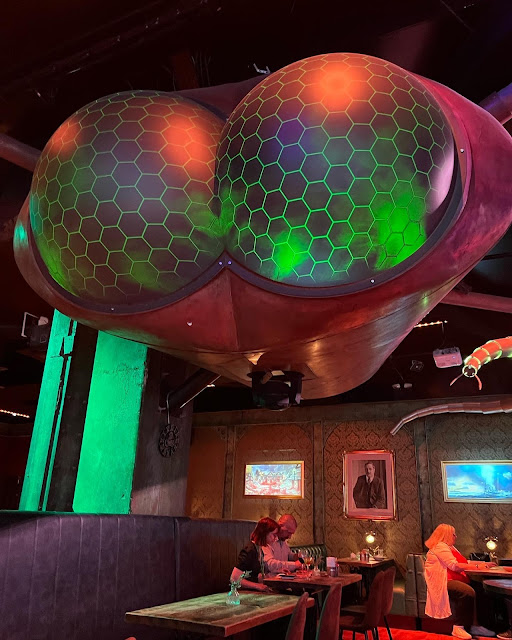 The experience is set out as if it has been created as a memorial in 1904 (I believe) to the Martian invasion that took place six years prior. A guide introduces herself and tells us that what we are about to see may feel real but that it is all fake and based on the famous account of a writer who lived through the event. In a small cinema type room we sat down and watched hologram type images of George and his wife as they give an introduction.
The experience follows the same route as the musical and book itself. The first proper part has our group of around eleven people being shown around an observatory by an actor playing the part of Ogilvy. Looking through telescopes we see Mars and the green mist coming off it, before seeing a spaceship crashland. The next scene we are taken to a room where a pod is at the back. Ogilvy goes up to it and led to a fun part where a heat ray beam is following him around with him oblivious to the danger. Then he goes up in flames, an effect that is created by swapping out the real actor for a video of a man burning on the back wall. The heat ray then shoots some more, each time actual lines of flame shoot out across the ground in front of us which was a cool effect.

Next we meet an artilleryman who leads us to the front of George's house. He opened a window and we then had to climb up through it. This was one of many elements that gave me a feel like I was on the set of The Crystal Maze. Later on there was a secret passage hidden behind a bookcase, a very narrow spiral staircase, a rope bridge, and even a slide to go down. I really liked the design of the place, it felt maze like and really made you feel like you weren't just in a building. Anyway, inside the house we are all seated at a large table when a maid appears. This leads to a (slightly too long) sequence in pitch black that culminates in a legitimately freaky looking part where strobe lighting flickers over the maid as a tentacle from the fireplace wraps itself around her while she screams. I loved that the noise of battle outside is reflected by such things as the light fixture swinging in the room when there are loud blasts, immersive for sure.
Back with the artilleryman and there is a section where we are going through bunkers near the front line before a secret door leads to two boats, the first of the VR sequences. This sequence first has you on a boat going down the thames, before you are out on the open sea circling the Thunder Child during its fateful battle against the fighting machines. The VR wasn't as detailed as I had hoped, buildings in particular looked quite basic shapes. Once we were on the sea however things really picked up. Wind was blown at us, while sprays of water hit us, and the boat we were sat in in real life must have been on hydraulics as we could feel ourselves moving. It was a pretty cool moment, impressing my dad especially. When we came out of it, he, never having experienced VR before said "That was brilliant, I've never done anything like that before in my whole life!". Being the halfway point of the musical we were led to a very secluded Red Weed bar, bathed in red light and with the walls covered in weeds this was a very cool looking room, the Red Weed drink we were also given was refreshing. 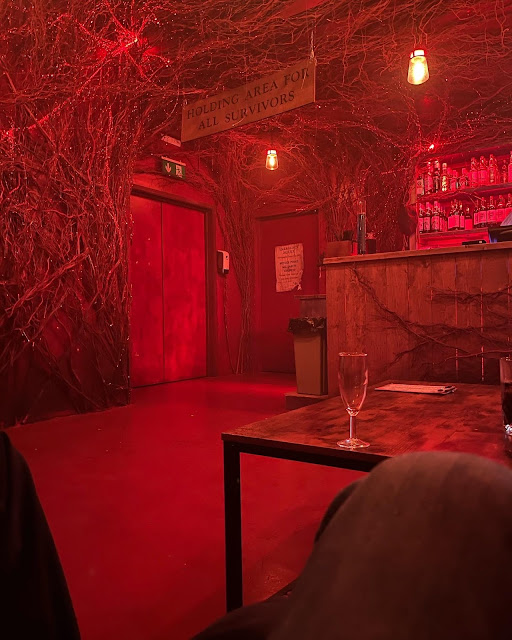 After around a twenty minute break we continued on, heading to a church. A female priest led us to confession booths where the second VR segment come into play. There were several cool things with this part. First, that the booth we were in matched the VR confession booth in terms of size. A curtain moves and we see the conversation between the preacher and his wife, after setting the church on fire I could feel a real heat on my face, another cool effect. There is then a section set inside a fighting machine where a tentacle poked me in VR, simulated in real life by something prodding my stomach! It was all quite cool but sadly my dad had a faulty VR device and so could only hear the audio and not see anything. That was a shame, you would think they would check the headsets before hand to ensure they were all working.
Meeting the artilleryman once again underground was fun, he had a more deranged wide eyed look to him, the actor was great, especially liked when he came right up to me, asking me if I remembered him from earlier. One of the weirdest moments of the experience was for his song. We are taken to small rooms where we sat on a bench with our heads almost on rests to stare at the ceiling where a M.C Escher style video plays of the man's imaginary underground city. Maybe it was the blood rushing to my head due to it being near upside down, but I found that whole part quite trippy.
Finally is the last VR part, we are taken to hot air balloons where in VR we fly over London and the corpses of the martians, before the balloon flies out into space and all the way to Mars, helped by hydraulics making it seem like the balloon was moving around. Posing for photos, a man leads us back to the Spirit of Man bar where he loudly announces that "we have survivors!" After getting some expensive merch (a mug for me, and a pen for my bestie, who promptly lost it the very next day!) we had a nice meal included in the ticket price and then headed home.

Having been to a live zombie event some years previously I had a good indication of what The War of the Worlds Immersive Experience would be like. I enjoyed this just as much as that one. The actors were mostly good, a few who seemed a little more quiet, but the more over the top they were, the more enjoyable the performance. The VR may have been less impressive than I had hoped, but all the stuff like wind, heat and movement really elevated it to something wonderful. I had a great time with this, and a great day out with my father.