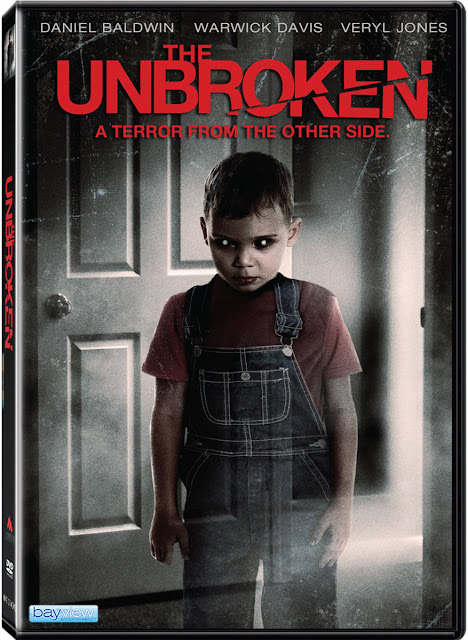 This is the first of two news posts for this week. As I have mentioned in other places, I phoned in my blog posts this week due to heading to a War of the Worlds interactive experience in London this past Sunday. On to the news.

Prosper is a new horror film that was released via Midnight Releasing on June 3rd. This was written and directed by Deronte Smith and is about the last witch of Salem who returns after a fifty year absence in order to sacrifice people in order to keep her soul replenished. The film stars April Hollingsworth, Shayla Love, Nic Wolfe, Davien Harlis, Renier Cortes, Walnette Marie Santiago and Anastasia Pekhtereva.

The Unbroken is about a woman named Sarah who begins to get visions of a young boy who becomes associated with accidents that start happening around her. It stars Daniel Baldwin (Vampires, Grimm), Warwick Davis (Leprechaun, Willow) and Veryl Jones (The Punisher, Out of Time) and came to DVD on May 31st from Bayview Entertainment.
Finally, in this smaller post, a trailer has been released for Crime Traveler: The Adventures of Dave Slade. This eighty five minute Dave Sweeny film stars Nicholas M. Garofolo as the titular Dave Slade in a time travelling fantasy film about a reluctant hero. The press release states 'This film will be better then Top Gun Maverick...Best Summer 2002 movie - - coming soon!'. The trailer can be seen here.
Posted by Daniel Simmonds at 12:12