The Prey: Legend of the Karnoctus (2022) - Horror Film Review 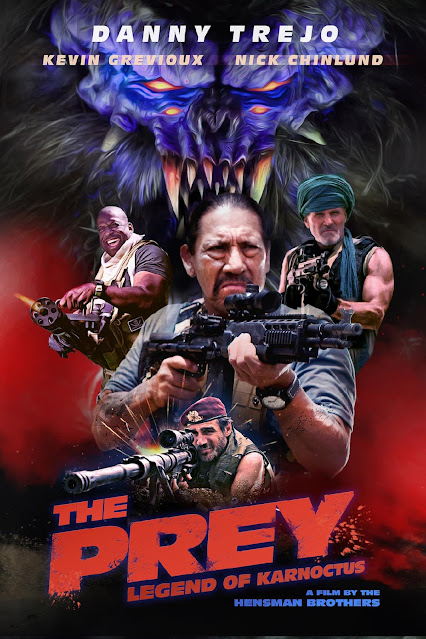 The Prey: Legend of the Karnoctus is a creature feature horror that was co-directed by Cire and Matthew Hensman. To say this felt like a cross between Predator and The Descent would be doing those films a disservice, as while there are some good bits here, mainly it is a bit of a snoozefest.

A group of mercenaries have planned a heist in Afghanistan to make themselves rich. Their plan is simple, to ambush an insurgent group there and steal their precious cargo, then while two of them, Reid (Kevin Grevioux - I, Frankenstein, Underworld) and Tagger (Nick Chinlund - The Chronicles of Riddick, Con Air) take the cargo to a nearby cave system, the others, which include among them, Vega (Danny Trejo - Machete, From Dusk Till Dawn) are then to go and find a helicopter and come retrieve them and the prize. Things don't go according to plan though, a U.S platoon in the area come under attack from who they assume to be Taliban, they choose the same cave that Reid and Tagger happen to be hiding away as a place to seek refuge, and during their escape from the enemy force a cave-in is caused trapping all inside. With no other option than to team up together, the two groups head deeper into the cave system with the hope of finding an alternative exit. Unfortunately for them, the cave happens to be home to a very deadly sasquatch creature known in local legend as the Karnoctus... 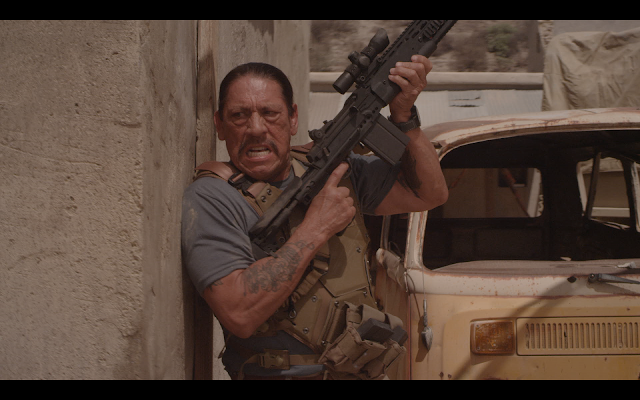 It is obvious that The Prey is an indie film, and that can be seen almost straight away with essential parts of the plot taking place as animated comic book panels during the intro credits. The larger than life mercenaries are the best part of the movie, but aside from a brief prologue gun battle many of these characters then leave the film, only to return as cartoon images during the film's epilogue. Trejo is a double edged sword in indie films like this, his inclusion is of course very welcome as he is an iconic legend, yet his appearance is only ever fleeting, I assume due to the cost of hiring him. Aside from Reid and Tagger, who were both very entertaining, the rest of the cast are the U.S platoon who are full of cocky, yet fresh faced soldiers. They are stereotypical as they come, covering different races, and featuring the obligatory comedy character in the form of the somewhat annoying Sullivan (Matt Musgrove - Grimm TV show). This colourful cast are who try and hold the interest as a huge chunk of the film just has these people wondering around dull identical looking featureless caverns as they bicker amongst themselves.

The lack of much action can be seen by the introduction of various different ideas to try and keep the movie from stalling too much. Notably, a variety of scenes are thrown in that feature different soldiers hallucinating, due to a gas canister they accidentally set off. It seemed this was purely used to give the characters something to do. Despite being stalked by a sasquatch type monster this seemed random, it would appear and pick members off, then promptly vanish for ages at a time without there being any rhyme or reason to how or why it was doing this. The Predator vibes comes from the times the film shows its perspective, heat vision and x-ray used to show how it sees the world. When action does happen the film often goes for fastly edited together scenes that create a feeling of confusion and makes the simplest scenes seem a bit hard to follow. Also not too welcome are some of the special effects that use some dodgy looking CG, it kind of sucked that one of the better characters died via their head being crushed in a very artificial looking manner. 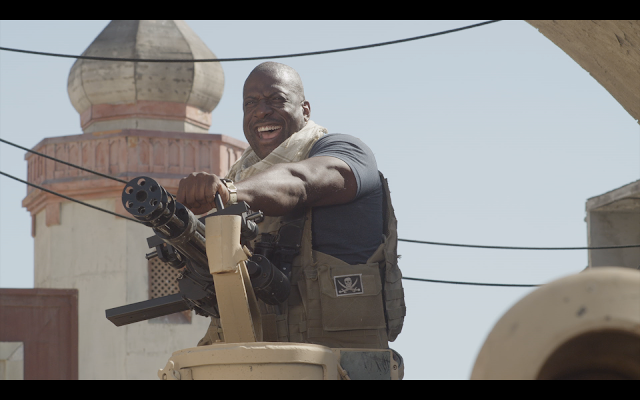 I always find creature feature films to be a bit hit and miss, for whatever reason they are far more likely to fall into the trap of being a bit boring, and that is what happens here. It doesn't help that the location most the film is set in is just so monotonous in look. While it isn't all terrible my overall impression of this was that it just wasn't exciting enough, I found myself clock watching almost constantly, and that was a real shame. The Prey: The Legend of the Karnoctus comes to theatres on June 3rd and comes to cable VOD on June 7th.