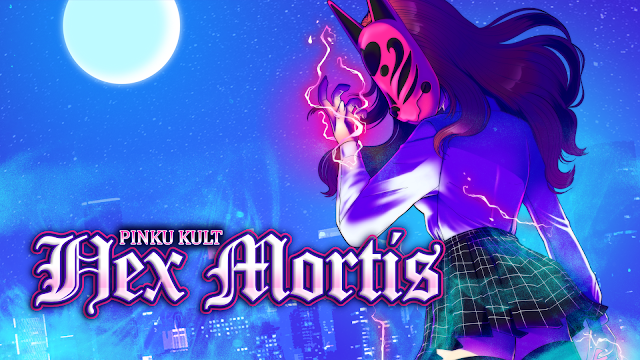 Pinku Kult: Hex Mortis is an indie turn based RPG with a definite horror bend to its style. On the one hand it is perhaps too simple in its gameplay and mechanics and has a bit of a short length. On the other hand however this was a load of fun with good music, an interesting artstyle and an addictive feel. Originally this was an apparel brand designed by Hana Eaton, so it was cool to see it altered to become a game instead.

The game takes place in the dark and grim Razore City, where, desperate for a job you apply to work for the mysterious Shokan Corp. Your application is successful and you initially get tasked with investigating a series of unexplained disappearances around the city that have something to do with a strange girl wearing a fox mask. Your adventure leads to you discovering that demonic forces are loose, and eventually leading a group of four characters you battle over four chapters to stop them. 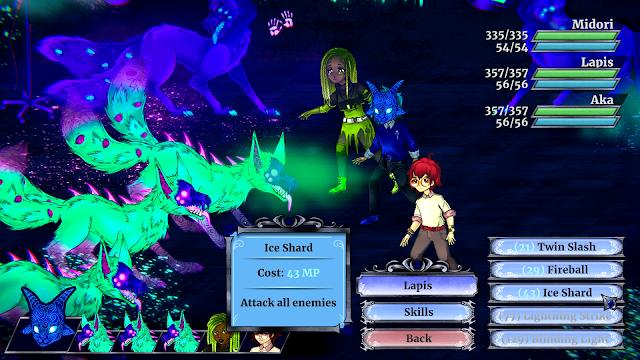 With a small map screen I figured this wouldn't be the longest game in the world, and after slightly under four hours I had finished it. With a $9.99 price tag (seems to be £7.99 in the UK) that wasn't the worst price for what you get. There are three main dungeons to explore as well as an optional one that combines elements and enemies of these three together. While this is turn based fighting, the enemies appear in the gameworld before hand rather than it being random. There were no proper side quests to do, though there are obvious other things you can be doing which tie in to a fortune teller you can find on the high street. One complaint I had was the simplicity, while you can level up as you fight enemies, which unlocks more powerful abilities, there is no option to buy better weapons and armour/clothing. There is a shop where you can buy a limited number of potions to restore both health and magic, but with the amount of health items dotted around the levels I never really felt the need to buy these. It led me to amassing quite a small fortune of money that I had nothing to spend it on.

In terms of the story I was pleasantly surprised, there is lots and lots of text to read, at times it almost felt like a visual novel due to how much characters talk to each other. The character you play as typically meets a new character each chapter. Starting with meeting the paranormal investigator Aka, you eventually also gain the depressed botanist Midori, as well as the rabbit circus girl, Momo. Your party have distinct strengths to them. Your character is the only one able to use summons, Aka has access to sigils, Midori can use herbs to heal, while Momo has the most useful ability of all, she can do a rallying move that restores MP. Using magic is the key to many of the battles, it slightly recharges each round, but with Momo's ability your team becomes a powerhouse. The game has simple animation to the characters and monsters but retains an attractive artstyle. Playing this felt like a cross between Persona and a chibi version of Silent Hill, albeit very simplified. The three different dungeons are varied, starting off with an underground cavern home, you later go to the backstage area of a concert in a Hell-realm that is full of day-glo enemies and scenery, and a circus that has been blended together with Alice in Wonderland. There may be a limited number of areas but they are all distinct and all feature their own enemy types, from the giant spiders of the first dungeon, to demonic groupies and animalistic circus performers. Bosses typically have you go up against a demon whose appearance gets progressively more monstrous as you battle them. Combat initially was slightly tough, at least with the boss fights, but your characters swiftly level up, each new level maxing out your health and magic again. It may not have been a tough game but it was fun to play through, the combat never became dull. One thing that was never explained however was the choice you have to make after beating a boss, you have to either exorcise them or banish them but it is never explained what the difference was, story wise and summon wise it seemed to make zero difference.

My expectations were low for Pinku Kult: Hex Mortis but I was surprised by how much of a good time I had playing this. Sure, it may be simple and limited, the animation may be a bit sparse, and it may be a short game but it had a strong artstyle, great music and some cool enemy design to it, I have few complaints with this one. Pinku Kult: Hex Mortis released June 1st on Steam, Nintendo Switch and XBox with a Playstation version also coming soon.

Posted by Daniel Simmonds at 03:10