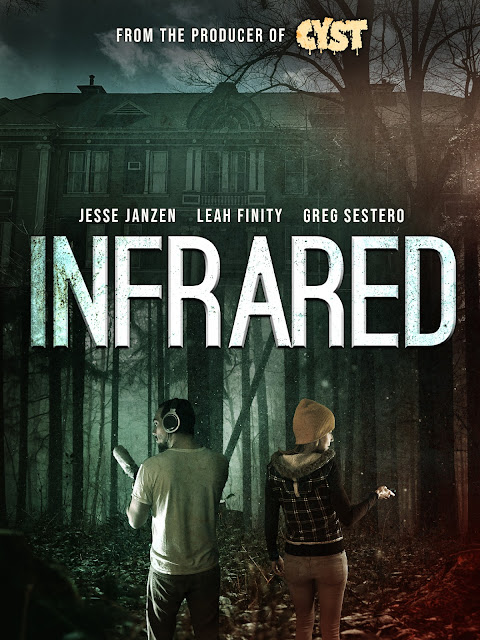 It has been a fair while since I last saw an old school style found footage horror that was really committed to doing what it said on the tin. Co-written and directed by Robert Livings and Randy Nundlall Jr. (who also play characters with the same names within the movie), Infrared started off a little rough but I really came to enjoy the dynamic of the cast.

The footage is presented as three separate recordings. One of these was pilot footage for a new paranormal investigation show that was to hosted by Wes (Jesse Janzen - Cry Wolf), the other two recordings are said to have been discovered in the basement of an abandoned school. In one of those later two we see brief footage of a woman exploring the allegedly haunted school before in typical found footage fashion her camera falls to the ground. The other one makes up the majority of the film and again follows Wes, who is in the middle of creating the first episode for his show. Having gotten permission by the goofy owner, Geoff (Greg Sestero - Tommy Wiseau's legendary The Room) to film in the school, Wes, along with his film crew and his sister Izzy (Leah Finity) are exploring the place, hoping to pick up some evidence of supernatural activity. They end up getting far more than they bargained for.

I can't say I was fully on board with this to begin with, this was mainly due to the first two small parts. The pilot footage featured Wes performing an exorcism in the house of a young couple. While I can see this worked in giving evidence of something bad that happened in Wes' past, the ridiculous demonic voice that the possessed woman talks with came across as silly rather than scary. Then there is the generic solo footage of the woman in the school, thankfully this part was short and it became interesting later on when it becomes clear how that seemingly unrelated incident feeds into Infrared's greater plot. The school itself was a good location, the abandoned rooms can't help but look good on camera, especially when day turns to night. It was helped by being given a backstory to it that made it feel more atmospheric.

While this is certainly a horror film, at its core this explores the relationship between two siblings. Prior to meeting at the school, Wes and Izzy had been estranged for the past two years, something due to what the prologue hinted at. The two actors work well with each other, it felt believable that they were siblings, and the way they worked together was effective. I thought Wes in particular was a good protagonist, there is something about his earnestness that is a bit pathetic, it is revealed via conversations with Izzy that making a paranormal investigation show had been his dream from since when he was a kid, but now he is out doing it he is a bit out of his depth. This provides the excuse for the two siblings to be reunited, the producer feeling that she will be able to give the show an element that might save it from being terrible. Because of these flaws Wes became a character I genuinely liked, and reading the press release for the film after watching it this was actually the intention of the filmmakers to make characters the viewer would care about.

The general idea of found footage revealing the production of a show or film has been done to death in the genre, everything from Found Footage 3D to Maria's Tale, Hell, even The Blair Witch Project used a similar idea. In terms of originality Infrared can't be said to excel, but it has ascended past the entries in the genre from the early 2000s where no end of people charging around to the tune of blurry footage and artificial camera glitches was the norm. Sure, there are certainly moments of kinetic footage, but for the most part this is far more restrained. This is a horror film but it is one where the horror almost takes a back seat, at least until the final fifteen minutes. There are little pockets of horror prior to this, but rather than feel short changed I was really liking the human drama element. The roundabout way of the story became something more entertaining than it first felt it would be, there were some unexpected curveballs along the way. There was the one moment though where you had to really suspend your disbelief, with characters deciding to do something very dumb in order for the film to be able to position these people where they needed to be for the plot to move forward. It did lead to a nice transition between the old way of making found footage horrors and the more recent way, which I won't go into for fear of spoilers, needless to say it was an effectively unsettling finish.

After a shaky start Infrared really improved, thanks to some strong performances from the two protagonists, and a nice almost over the top role from Sestero who was nearly scene stealing whenever he appeared. He played the role of one of the more comedic characters with energy. For people seeking high horror they may feel a bit short changed with it coming so late in the film, and it never really does anything too original feeling, but having not seen a film of this type for quite a while I ended up really enjoying Infrared.