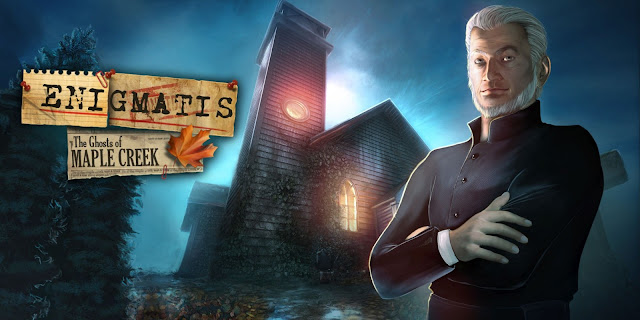 Lately while doing this blog at the weekend (for all my posts are typically written on a Saturday and Sunday) I have felt a bit like I'm dialing it all in, writing posts out of a feeling of obligation rather than feeling passionate. I blame all the video games I have been reviewing lately, I don't get nearly as much traffic for game reviews than I do for my film reviews. This weekend isn't the time to turn things around, I have just the one day I will be able to work on my blog as am going London for the day on the Sunday.
Enigmatis: The Ghosts of Maple Creek is a hidden object adventure game (first released in 2011), a genre that reminds me of my parents, who at one point in their lives both played these games religiously. If that hadn't been the case I doubt I would have become interested in these and noticed that a fair few of them are horror based in nature.

The game starts off in an interesting way. You awaken in the middle of a storm ravaged village with your short term memory completely absent. You are a female detective who had headed to the area in search of the cause for the high number of missing people reported there, and it seems you had made some headway into your investigation. The memory loss however means you must start almost from scratch, with only the enigmatic (enigmatis?) notes and clues from your prior investigation to go on. What you discover is a village with a brainwashed population, something to do with a local preacher. 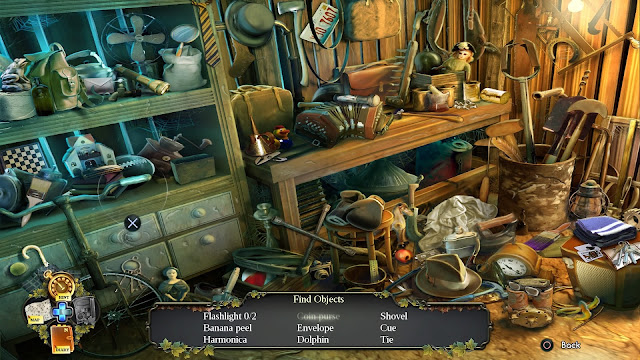 First off, that title is dumb. Sure, the game does take place at Maple Creek, but there are no ghosts at all here, it isn't that sort of horror game. Outside of the mystery of finding the location of all the missing girls, you also have to discover what is causing the village folk to act so weirdly. When hidden object games first appeared that was all you would do, search room after room of massively stuffed environments, with a whole laundry list of things to find. As the genre matured, these hidden object segments were made simpler, while a whole host of one shot mini games were introduced with a slight puzzle element to them. The puzzles here are as simple as the hidden object scenes, but not so simple that you don't need to at least vaguely use your brain. With the hidden object sections the only issues can come from not quite understanding what the object you are seeking actually looks like, but a generous hint system works there. With the puzzle sections these include such things as block puzzles and simple math problems. At any point you can use the hint system to point you towards where you need to go, while a map screen highlights any areas where you can do things to progress the game.

I liked the way the story was drip fed, and the way that your character slowly regains her memories (always shown via an increasingly long cutscene of a fateful night where your character had first solved the case). The preacher character as an antagonist wasn't bad, but I never really understood just why he was doing what he was doing. It doesn't help the game ends on a cliffhanger (there are two more in the series, Enigmatis 2: The Mists of Ravenwood and Enigmatis 3: The Shadow of Karkhala). There were a couple of vaguely twisty revelations. As is often the case, there is also an extra chapter unlocked upon completion of the game, in this case you play as a detective in the eighties who is searching Maple Creek for his missing girlfriend. The main issue with the story itself is the God awful voice acting, the protagonist of the main game, and the one of the bonus chapter both sound like they are Siri voices, monotone and placeholder. 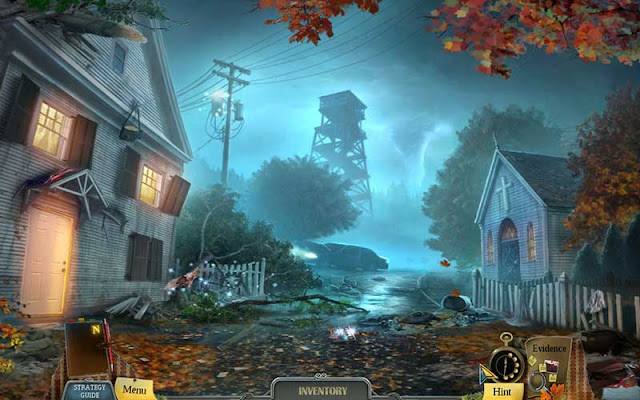 It is hard to be too down on Enigmatis: The Ghosts of Maple Creek, it is a perfectly good example of one of these super casual games. It isn't meant to be taxing, instead the opposite, it is designed to be relaxing, as can be evidenced by the huge hint system. Perhaps by the end of the bonus chapter I was feeling a bit tired of the format, but I would be lying if I said I hadn't gotten some braindead enjoyment out of playing this game.

Posted by Daniel Simmonds at 07:14