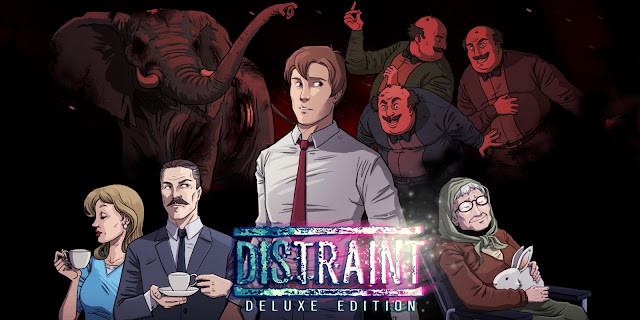 A few years back I got in a real bad habit of buying no end of digital games in various sales. It became a problem as I wasn't actually playing these games, they were just joining an already out of control backlog (seriously, its well over a thousand games waiting to be played). Lately I have started pecking away at some of these games and Distraint: Deluxe Edition was one of those. It just goes to show how little I know of the games I own, as this turned out to be something quite a bit different than what I assumed it would be.

Distraint is a psychological horror game with a grotesque art style to it. You play as a young man named Price. You are a bailiff for a law firm and have been promised by the firm's three elderly bosses that should you successfully get three different tenants evicted from their properties that you will be made a partner. While there are other parts to this, the meat of the story has you solving minor puzzles in a limited 2D setting in order to evict three people. The first person you have to evict is an elderly and lonely woman and while you are successful, just what your job entails begins to really affect you, especially after learning the old woman was forced to move into a crueley run nursing home. 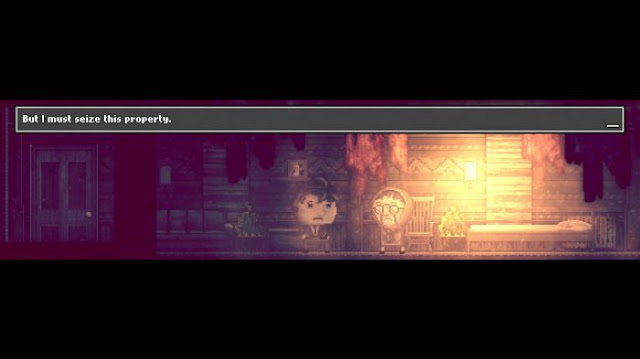 On the surface this doesn't scream horror, but the game has a distinct pixel based horror look to it, a letterboxed world of corridors and rooms that has the colour palette of a simplified Silent Hill, and the music to match it. There are six main areas in the game, including the three based around solving simple puzzles to evict tenants. In addition to the old woman, there is a level set at a log cabin out in the woods, and one that has you exploring a drug den in a squat. This is a dark world that is far more sinister than the real world. Here for example you will find a man in the basement of a nursing home chopping up the bodies of the recently deceased in order to save costs on funeral arrangements, and a large blood splattered dog who has recently savaged a fox. The game is 2D and has you as your gigantic headed protagonist waddling left to right, clicking on doors in the background to enter various rooms. There is no voice work in the game, instead the dialogue is all presented as basic looking text.

Because of the look, Distraint feels far more disturbing than its relatively grounded story would have you believe. With Price you have a protagonist who is grappling with guilt over what he is doing to people in order to better his own station in life. This is reflected in the many nightmare sequences, predominantly featuring the old woman he evicted, as well as the mind conjured spectres of his dead parents who bring to focus the evils that Price feels forced to commit as part of his job. The game doesn't have many fail states, I think the only real way to get a game over is to be caught by the zombified elephant that chases you at several points in the game (the literal elephant in the room used as a metaphor for Price running away from his problems). At times, due to the use of sudden sound and light I did jump out my skin a little bit, such as when a phone suddenly rings. On occasion I managed to get stuck, but there is so little to the small environments that you can often figure out the way just by repeatedly searching the locations. The general flow of the game is similar, solving small puzzles to move characters out of doorways, there was one level where you have to imbibe drugs in order to be able to pass through boarded up doors, made a slight change. 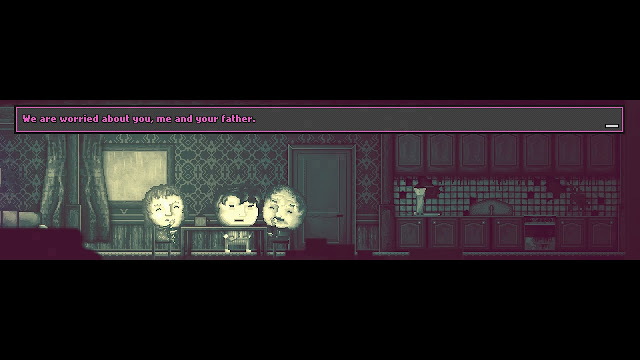 At just a few hours long (with a low price to match), Distraint was a decent experience. Under the horror stylings is a story that felt far more realistic than expected, leading up to a depressing downbeat feel. Impressive that this was all the work of one person. There is a Distraint 2 out (which it turns out I also own), and a third game currently in the works.

Posted by Daniel Simmonds at 11:32