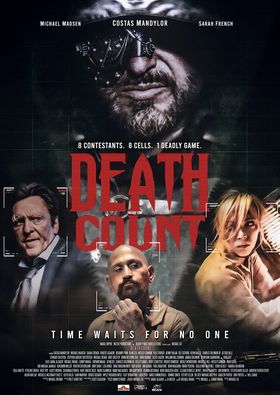 Eight people awaken chained up in identical looking grimy cells with no memory of how they got there. They soon learn from a mysterious man calling himself Warden (Costas Mandylor - Saw VI, Saw V, Saw IV) that they are to participate in a round based game that is being watched on the dark web by countless viewers. Should they refuse to take part in the violent games then they will be killed, and any attempt to escape their confinement will result in the explosive device embedded in their neck detonating. 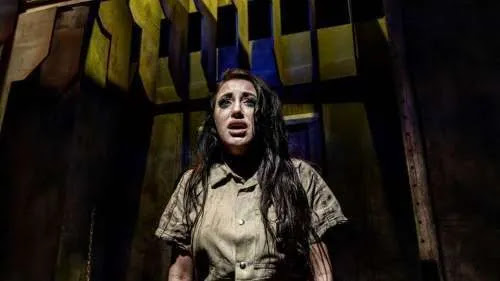 It soon becomes clear that Rachel (Sarah French - Art of the Dead) is the film's central protagonist, and while the film sometimes focuses on the other captives, it is her who gets the most screen time, and who is just about the most sympathetic of the bunch. The indie nature of this, and that it mainly appears to take place within a single room meant that I was reminded a lot of The Odds. The difference being the greater amount of characters here, most of which get taken out in various gory and original ways. The cast never get too much to their characters, the more aggressive ones shout threats and insults at the camera constantly, the more timid ones stand around and cry. There were some fun characters here amongst the cast, such as the very brief role played by Robert LaSardo (Attack of the Unknown).
Then there is the movie's subplot which was played slightly for laughs. This was a breath of fresh air in that it takes place out in the wider city, and centres on two incompetent but experienced detectives who have been put in charge of stopping the killings. To do this they spend half the film sat around in a busy office cracking jokes, and then the second half of the film randomly driving around while still cracking jokes. These parts are impacted by some dodgy acting at times, though with Michael Madsen (Kill Bill: Vol. 1, Reservoir Dogs) playing one of these roles it wasn't all bad. For such a known actor he was in this more than I expected, though this subplot only makes up around a quarter of the eighty minute run time.

People don't seem to like the term 'torture porn', but it fits for me. This is a film that delights in causing suffering to its cast of characters, but it falls apart a bit in the lack of imagination. Each round of the game is pretty much the same, the captives are made to select an item from a toolbox and then self injure themselves with it, in order to earn 'likes' from the online viewers. There is the obligatory 'tooth pull' that often appears in these sorts of films, but there are some more gnarly moments, such as a man who bashes his hand with a hammer until bones start to stick out, and a character who stabs a knife all the way through their hand. Most of the kills come from the high number of captives who choose not to participate, with a seemingly limitless numbers of ways they die. From one who gets injected with a cocktail of drugs, to someone burnt alive and someone else engulfed in acidic gas. All these kills don't have the best looking special effects to them, but they are consistent in the look, the blood while a bit bright, is used a lot making for one gory looking film.
On the side of the story, it turns out all these characters have been selected for a reason, but the eventual reveal felt a bit uninspired. There are a few turns along the way, but by the time the subplot meets the main plot it has gotten all a little bit over the top.

Death Count had some pacing issues to it, it felt it would have benefitted with some more scenes set outside the cells. Despite that, this wasn't a bad film, what it lacked in realistic looking effects it made up for in variation and certainly was deliciously bloody and gooey throughout. Death Count is due for release in North America on July 19th, via Gravitas Ventures.