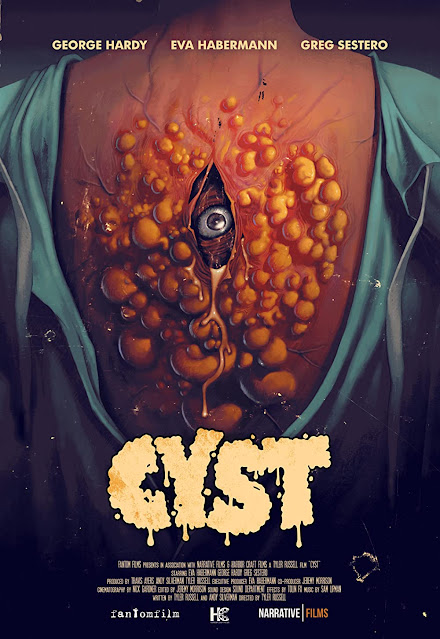 From the title alone I was unsure whether comedy horror film Cyst would be for me as I'm not one who typically likes gross-out humour. The story in this Tyler Russell directed and co-written horror was so ridiculous that I found myself drawn into the almost grindhouse feeling experience.

This takes place in the 1960's, specifically in the office of crazed cyst specialist Dr. Guy (George Hardy - Troll 2). The man has been trying unsuccessfully to get his new machine patented, a machine that is designed to completely destroy cysts thanks to its precision laser. Things haven't been going according to plan however, as can be attested by the scar his long suffering assistant, Patricia (Eva Habermann - Trolls World) carries on her shoulder from a previous demonstration. Wanting to properly demonstrate the machine's power at destroying cysts, Dr. Guy injects his interns own small cyst with a serum that causes it to massively grow. This leads to an unexpected side effect however, the intern's cyst becomes a sentient creature and detaches itself from its host. It isn't long until the cyst has mutated into a hulking seven-foot tall monster, one that is determined to kill all the people within the offices it has become trapped in.

At just under seventy five minutes long Cyst goes along at a rapid pace once the creature makes an appearance. Due to the sixties setting this had an old fashioned feel to it, something that is reflected in the camera work itself. While there are no false additions such as film grain or burn it still felt like a movie lost from time. The creature design was certainly interesting, a bulky main body, with one giant eye on its shoulder, this creature reminded me a lot of the G-virus afflicted William Birkin from the Resident Evil 2 video game. Earlier in the film there was a The Thing vibe with the small head-sized cyst creature scooting along the corridors. It has tentacles which it uses to grab onto many of its victims, and its pus seemed to be acidic as is shown to cause burns bad enough to be able to sever limbs! While the cast isn't huge, the majority end up in some way afflicted by the beast, including at least one severed head.

Elsewhere, the sets are covered in blood, and with pus dripping from ceilings, it should all be disgusting but the idea is such a stupid one (in a good way) that I found myself enjoying this. Strip away the cyst monster and this would be a less interesting horror.
There are a few scenes taking place outside, but with the medical office in lockdown most the film takes place within its sterile looking rooms, accentuated by all the fluids dripping everywhere. The actors are more inclined to play their roles over the top, especially with Hardy who channels the manic stereotype of a mad professor, seeming fascinated with his accidental creation, and ready to sacrifice anyone who gets in the way of his own self preservation. I didn't really like any of the characters I'm sad to say, even the protagonist Patricia I didn't particularly like, I could never understand why she stayed so defensive of Dr. Guy seeing as he starts the film by firing her. A few of the side characters had some standout actors though, Gene Jones (The Hateful Eight, No Country for Old Men) was amusing, and was nice to see Greg Sestero once again (Infrared, The Room).

I liked the style of Cyst, I did like some of the more energetic performances even if I didn't like the characters themselves. Special mention also goes to the end credits which play out over a single shot of a character walking, leading to a maybe unsurprising, yet no less welcome after credit sequence. Outside of the gross monster itself the plot didn't go anywhere very surprising, but it was full of neat looking practical effects and a decent monster design.