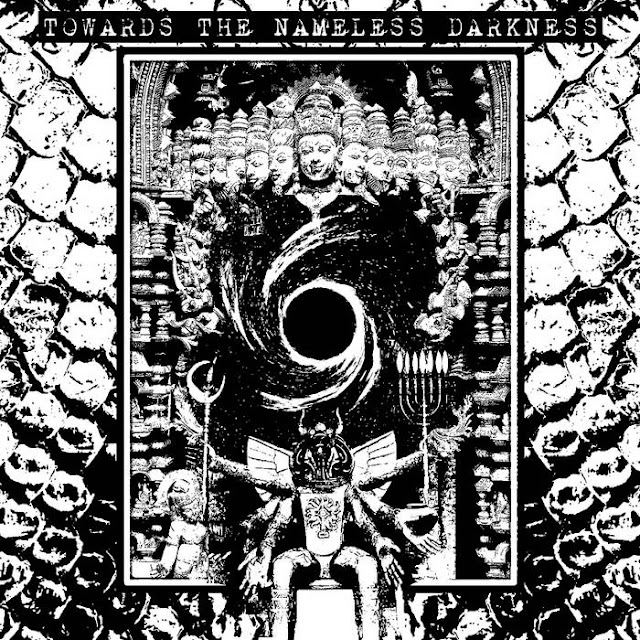 Towards the Nameless Darkness is a split EP that features four tracks, two from Grave Gnosis and two from Hvile I Kaos. This is designed to be a teaser of both bands' upcoming full length albums, Pestilence Crowned from the former, and Lower Order Manifestations from the later. The press release states that this 'is a collaboration of magickal exploration through music, expressing the nature of parallel spiritual forces, focusing on aspects of the Sun and its Shadow, as seen through the lens of Vedantic Nihilism'. I can't say I understand much of that, and I also say as usual I really have no business reviewing music.
The first half of the split EP features the two Grave Gnosis tracks. Opening with Carnivorous Darkness. To be honest at first this sounded like a wall of noise to me, but a second listen with headphones on allowed me to really hear the different instruments that make up this track. Mixed into the background are scratchy vocals that sound like both a whisper and a shout, sounding like some sort of incantation is being said. This was all held together by a slightly mournful sounding guitar up to the end of the first third when an increasingly slower guitar riff plays out and all other sound cuts out. The repetitive cycles of the sound give the feel of an increasing downward spiral leading to a strong finish.
Second track, Vultures is another roughly six minute track and starts off with a great guitar riff. Musically this followed the same feel of a doom laden downward spiral but with its own spin to make it somehow distinct to first track. During my second listen to this one I was out in my back garden shovelling bits of a very dismembered pigeon I had discovered there into a bin bag, was an audible distraction to that gnarly task.
The second half of the EP is Hvile I Kaos and with that comes a much more peaceful sound. My Hatred is Just features Kakophonix's cello predominantly. The rustic vibe was a good compliment to the more harsh sounds of Grave Gnosis though despite the change in music style both felt like different interpretations on a similar theme. While more peaceful the track is tinged with a slight feel of darkness, my enjoyment of this was helped by me walking around a local wood during my first listen.
Closing out the EP is Locusts which starts with screeching strings with an ominous tone which builds up over two minutes into an even better sounding segment. This track had a bit of a repetition to it that echoed the relentless feel of Grave Gnosis's tracks. It culminates in the beautiful final minute of the track.
While I would certainly say I enjoyed the second half of this more than the first, the two different styles work surprisingly well together. The highlight being the switch between Vultures to My Hatred is Just which shows the contrasting difference. Both styles contrast nicely against each other leading to a twenty five minutes of music that works very well as a whole. Towards the Nameless Darkness is due for a digital music release on June 21st, check out the Bandcamp page for more details.
SCORE: