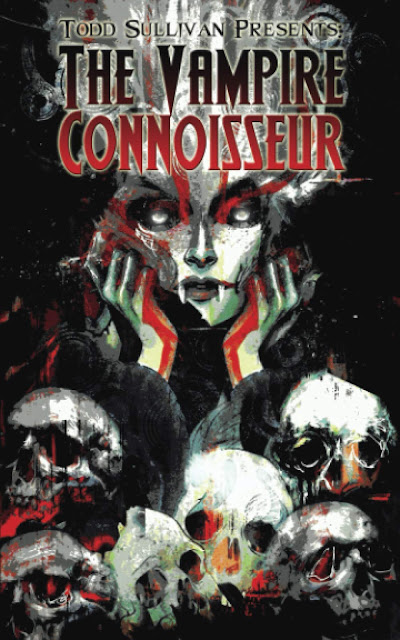 You would think it would be pretty obvious what the theme of an anthology book titled The Vampire Connoisseur would be. Maybe lacking some brain cells it took me a couple of stories for that startlingly obvious link to be made. All I can say is I blame reading this on my Kindle that I managed to not notice that title and put two and two together. Anyway, as I never seem to get tired of saying, I sure love me an anthology.

There are sixteen short stories here from sixteen different authors and as is to be expected there is variety. There are action heavy ones, comedic ones, dark ones, and ones that don't feature your typical vampire protagonist. Things start off on an emotional note with Lisa Hario's The Red Angel. This takes place in a children's hospice where a dying girl befriends a mysterious young girl who only appears at night. I thought that melancholic may be the vibe the anthology was going for, but that is soon put to bed with the very next tale, Gordon Linzner's A Visit from Saint Vic, this comedic story featuring two vampires who dress up as Santa and his helper in order to trick young children into allowing them entry to their homes on Christmas Eve, with things not going according to plan. The concept of having to be given permission to enter someone's home is again brought up with The Solution by Michael S. Collins, another humorous one, though this time it is a vampire trying to get access to a student dormitory. Finally, with overt comedy comes A Fiend Indeed. Written by Nicholas Stella, this concerns a very work shy salesman who is slow to notice that anyone called into the dark office of his new boss is never seen from again.
Going back to the more sombre variety of story there is one other, Poem of the Riverbank by Gary Robbe, the way this was written had a feel of poetry to it fittingly enough and features an unlikely friendship between a kind lonely man and someone he meets.

To balance this out there are plenty of more darker entries as well, and these were the ones that appealed more to me and featured some of the best stories in the book. The Sun Sets Nonetheless was a fantastic story by Priscilla Bettis. Told from a first person perspective this follows a farmer waiting for nightfall in order to kill the monsters that attacked his family the previous night. Short and serious this was a real gem. A Cold Dish by Lonnie Bricker takes a look at the ever present priest molestation scandals and features a secret room where a vampire is kept chained up in order to test priests resolve. Despite a troubling protagonist this had some great lines of dialogue. Splinters by Keawe Melina Patrick was another serious one, I loved much of this, the antagonist in particular had a really distinct look to it and felt like a real monster.
Vampire stories not featuring your typical vampire include What Little Remains that was about smoke creatures who could wear the skins of their victims like costumes. This one by Paul Alex Gray I particularly liked the suggestively twisted ending, as did the crazy Finch by James Pyne which looked at the idea of a vampire finch, again with an evil last line to it. Jacob Floyd's The Children of Lamia felt almost like a lost episode of Buffy the Vampire Slayer and instead of a vampire you have a half snake/half woman monster. Parasites: A Tale of Route 66 may have had a traditional vampire, but the inclusion of magical imps who open up gateways into their world in order to dispose of bodies was a cool addition, which led to a Twilight Zone style finish.

Rounding out the anthology are Dissident by Max Carrey, a short story that took place in Victorian times, Luke Frostick's Invaders in Wallachia that takes events all the way back to the time of Vlad the Impaler, and the closing story Take Me Home Tonight by Troy Diffenderfer, about a punk rocker who becomes enamoured with a mysterious girl. Finally, there always seems to have to be a gross story in these anthologies, and that can be found here with Give Me My Sin Again by Tony Pisculli. I would say that I didn't enjoy this but I would be lying, it is horrific the place this goes to but it certainly stuck in the memory!

I would never class vampires as my favourite type of monster but this was still an anthology that I enjoyed my time with. No story outstayed its welcome and there is variation for sure. Perhaps a couple of them all seem to end in a similar fashion, there are certainly plenty who hinge a lot on a twist ending, but there were, as always, some real good ones to be found here. Todd Sullivan Presents: The Vampire Connoisseur is of course out now (having realised I got this book for review over a year ago).

Posted by Daniel Simmonds at 02:32