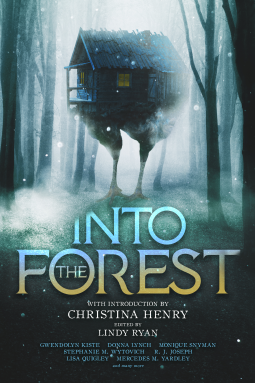 Howdy, I have a week off of work this week, not doing much other than chilling at home and playing lots of games. I'm currently torn on what my fifth blog post should be for the week, maybe a first impression post on Evil Dead: The Game as I've noticed a lot of the big sites have yet to even mention the thing (that is indeed what the fifth blog post became).

A new trailer has come out for Feeding on the Living which is the third chapter in the Dave Slade film series. The film is to feature Nicholas M. Garofolo reprising his role as Slade and will be joined by Arina Ozerova, Warren Chao and Dave Sweeney, the trailer makes it seem like it may have something to do with vampires. This has been written and produced by Garofolo with Sweeney directing. The trailer can be seen here.

Black Spot Books have announced a new women-in-horror anthology titled Into the Forest. The theme for this anthology (I love a good theme) is the stories will be inspired by the Baba Yaga (not John Wick, though that would be cool, this is about the witch in the woods from Slavic folklore). There will be twenty three original stories here from both bestselling female authors and new authors. Included are Gwendolyn Kiste, Stephanie M. Wytovich, Mercedes M. Yardley (Beautiful Sorrows), Monique Snyman, Donna Lynch, Lisa Quigley and R.J Joseph.

Blood Lust comes to DVD on 31st May from Bayview Entertainment. This stars C. Thomas Howell (The Hitcher, The Outsiders) and is about two friends, one of which seeks a relationship with a mysterious woman who partly owns a guest house.

Also out on 31st May, again from Bayview Entertainment, is Back From Hell. In this one, six former classmates go on holiday to a manor house in the countryside where they begin to experience paranormal events.
Finally, some music news. Eternal Frequency have released the second chapter in their cinematic sci-fi series, A.I. The Harrisburg, PA based heavy rock band say of this 'A.I. brings up the unavoidable challenge that every artist will eventually face and that is someone who is not part of your camp telling you what they think is best for you. It is about not conforming to anyone's preconceived notion about you and refusing to be controlled by the system. This is our message to be who you are in your image alone.'
Posted by Daniel Simmonds at 11:44