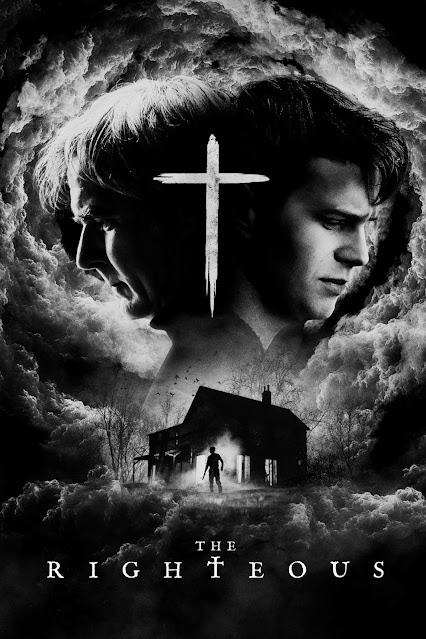 The Righteous is a character drama that carries with it a definite vibe of horror. Written, directed and co-starring Mark O'Brien (actor in Ready or Not), this is a film whose story is fixated on religion and was very much a slow burn. However, this falls very much on the right side of slow burn with a tense character focussed story that explores the issue of sin and penance in an intense and interesting way.

Henry Czerny (Ready or Not, Mission: Impossible) plays Frederic,  a former priest who left the priesthood some decades back in order to marry widower Ethel (Mimi Kuzyk - Shadowhunters: The Mortal Instruments TV show). The film begins with the grieving couple at the funeral of their young adopted daughter, then days later, with the couple deep in mourning, a strange young man (O'Brien) arrives injured at their remote home. The man remains enigmatic about where he has come from and how he came to be injured, but gives his name as Aaron Smith. At first Ethel and Frederic are suspicious of the man, but they come to find themselves enjoying his company. It is then that Aaron reveals his true intentions to Frederic, and gives him a dark proposal that has the former priest forced to confront his relationship with God and reflect on his past mistakes. 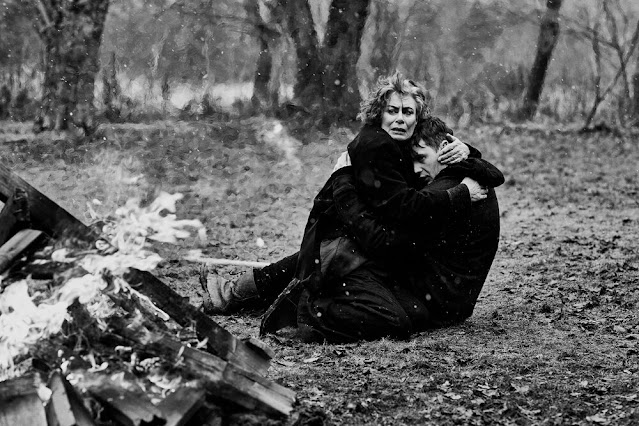 This works so well as a slow burn due to the laser focus on mainly just the two characters. The character of Ethel, while ever present, does become almost a side character, it is the many conversations that Frederic and Aaron share that make up the meat of this drama. There are a handful of actors and all of them were well chosen for their roles, in particular these main two whose long conversations became so captivating. Aaron was the more fascinating due to the mystery that comes from his sudden appearance. Over the course of the film his half truths and made up stories reveal themself to me something more personal. There is the hint of the supernatural here with Aaron saying things that he couldn't possibly know, and a few incidences of impossible things occuring on screen. With it stated that Frederic is prone to blackouts and possibly hallucinations, it was never clear exactly what was real and what wasn't. Many of the heated passionate conversations between the two men for instance take place in the middle of the night, they often end with Frederic suddenly opening his eyes to discover he is in bed.

I am not a smart enough person to really talk about the themes of the movie, but Frederic's lapse in faith with God is a major one, the man feels like the death of his adopted daughter was punishment from God for past mistakes he has made. This is something that plays into Aaron's story as well, with him stating he has arrived at the house due to fate ordained by a higher power.
The Righteous is shot in black and white and due to mainly being made up of long conversations there isn't much need for special effects. When they are used they work well. The black and white look seemed like the perfect choice and gives a chill to the remote farmhouse. It's best tool is building up tension and horror within measured words. There were some aspects that I didn't feel worked as well, but the overall discussion about the nature of a vengeful God and committing sin was what kept me glued all the way up to the chilling final shot. 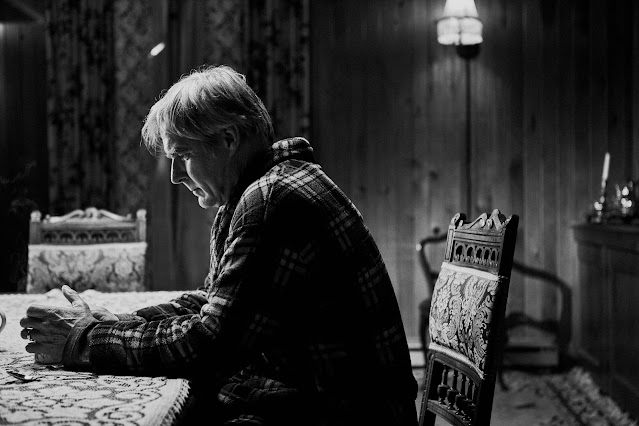 The Righteous is a film designed for me to completely fail at talking about it in a cohesive way. This isn't something that is full of action and visual horror. Instead, this is a psychological slow burn that teases out its strangely captivating story near entirely via conversations between the two principal characters. If that sounds like something that appeals to you then check it out, it's something special. The Righteous received a digital release in the UK, US and Eire on the Arrow streaming service.