The Nail That Sticks Out (2018) - Short Horror Film Review 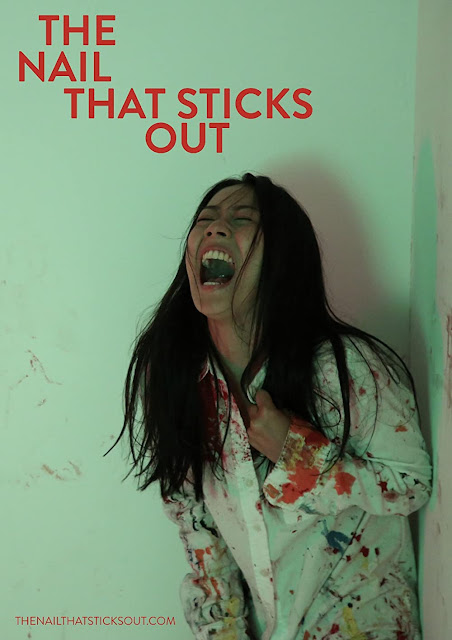 The Nail That Sticks Out is an award winning short British horror film that was directed by Jordan Dean (The Inner Demon) and written by Rebekah Whelan in her writing debut. The perils of a struggling artist are often used for horror, everything from Legend of the Muse to The Spirit Gallery and Rust Belt Driller, the tortured artist trope works well in this context. This fifteen minute short adds to this idea with a tortured artist all of its own.

Japanese Aiko (Natsumi Kuroda) is a UK based artist who is feeling the pressure to produce work that betters what she has already put out. Meanwhile, her girlfriend and muse, Elisabeth (Laura Peterson - Coven of Evil) has aspirations of becoming a successful actress. One fateful day sets Aiko on the path to her artistic salvation, though at a great cost.

I always enjoy these types of ideas, I enviously look upon all manner of creators and only on occasion feel even the slightest aspect of what drives them. With Aiko you have a protagonist whose erratic behaviour seemed to come somewhat out of nowhere. An initial spark of creativity, one troubled almost arthouse style nightmare and there is a descent into nightmare. The core of the film, outside of her art, is the relationship between the two characters and the opposite paths their lives are trying to head.
In terms of set decoration and effects, the art is decent enough to seem authentic for the character, and the special effects while sparsely used sell what they are trying to sell.

The Nail That Sticks Out was a decent short horror, one that might have benefited from more time to chart the downward spiral of Aiko, or at least present more of her internal thoughts to the viewer. Despite that, another Dark Matters short horror that was well worth sticking around to the twisted end of. This can currently be seen on the Dark Matters' YouTube channel.

Posted by Daniel Simmonds at 00:43