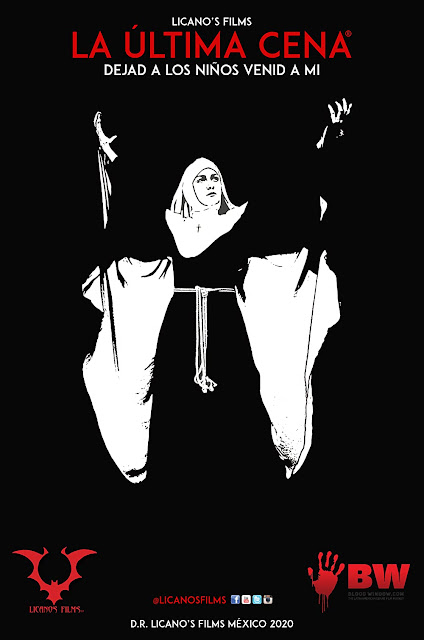 The Last Supper (original title La Última Cena) is a Mexican short horror film that had a lot of promise to it. This has recently headed to the Dark Matters' YouTube channel, this is still the best place I know of on YouTube to watch an always interesting mix of different short horror films. Directed by León Landázuri and co-written by him and Isaac Basulto, this effectively shot horror only frustrated due to its confusing open end.

Altar boy Carlitos (Kike Coria) and his friend Tania (Azul Vargas) are one day led deep into a convent by a young Spanish nun (Sandra Zellweger). Following the woman they get deeper and deeper until they stumble across an unholy scene. 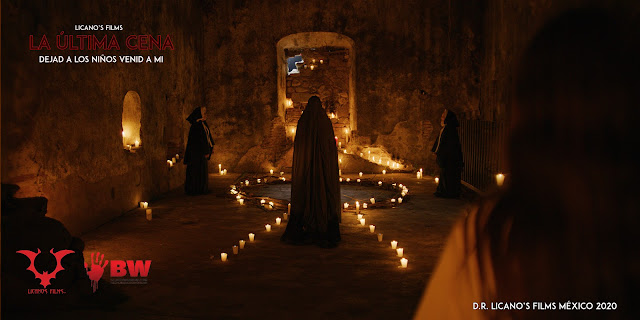 I loved the set-up fro this, there was a feeling this would become something demonic in nature. After a brief start the main part of The Last Supper follows Carlitos. During his journey there are CG effects used to suggest that something is night right. Notably, a shadow that lingers long after the person causing it has walked off, and a statue whose eyes move position when the young boy walks past. It culminates in a scene that includes full frontal female nudity (at a distance). The convent was a great looking and atmospheric location, full of long stone hallways and dilapidated rooms.
At ten minutes long (the final two minutes the credits) I liked how quickly this got the story moving with little build up to the beginning of the horror. It ramps up nicely leading to the final scene that visually was satisfying. What I didn't enjoy so much was how this ended. A character appears and says something intelligible and then the film ends. I'm not sure if the character was speaking Spanish and for some reason the lines weren't translated, or if the words weren't meant to be understood, but either way this being the final part of the film meant I was left wanting more.

As always, I did enjoy this, and I continue to enjoy how much variation Dark Matters' get with their films, it would be all too easy to stuff the channel full of identical looking shorts with the almost stereotypical jump scare ending, instead it seems to go out its way to get more unique films. With The Last Supper I was pleasantly surprised to see what felt like an old film was actually only made a few years ago. Despite my frustrations with how this ended I did like the short up to that point so would say it is worth a watch.