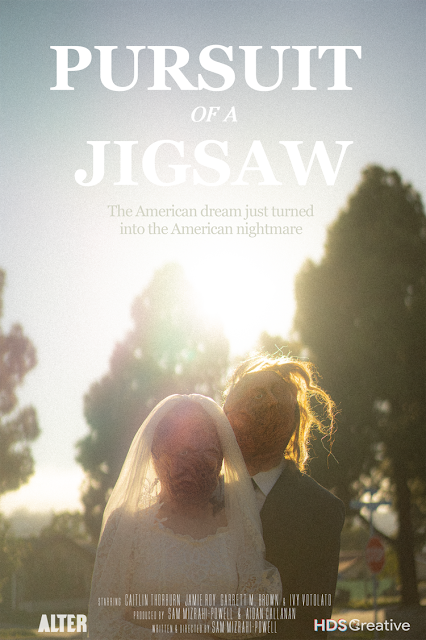 Pursuit Of A Jigsaw is a short horror/satire film that was written and directed by Sam Mizrahi-Powell. They state they think of this as 'a horror experience for people with commitment issues'. Now, this isn't a traditional horror film, instead it blends the superemly normal with the supremely subnormal, making for a short that I admit I struggled to follow, yet also appreciated its craft, especially with some of the effects used.

Jamie Roy (Your Boyfriend is Mine) stars as Ben, an office worker who is soon to be married to his fianceé Donna (Caitlin Thorburn - Good Omens). The problem is however that it seems he really doesn't want to be, and as it gets closer to the date his sense of self begins to evaporate as he begins a physical transformation into those around him. 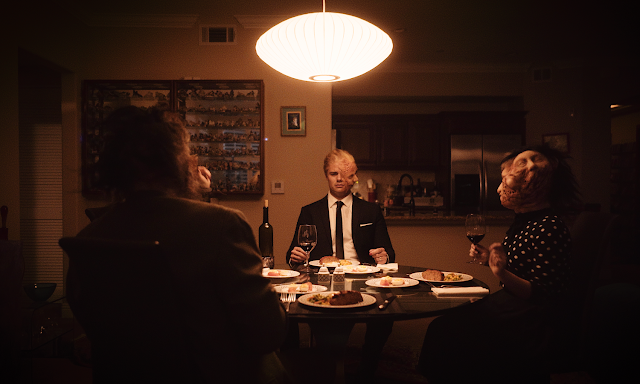 This twelve minute short covers a lot of ground, held in place by the pivotal character of Ben. A lot of the imagery relates to his impending marriage which has him concerned he will no longer be able to enjoy being the individual he wants to be. The ocean is repeatedly shown as Ben's safe space, during a work meeting for instance he is able to zone out by looking at a photo of the sea. Even this solitary aspect of his becomes threatened with his wife wanting to go to the beach with him. Within he is a man under assault, without he puts on a forced smile and false pleasantries. This comes to a head in the films most striking moment in which Ben is swimming in the ocean when a mirror ocean descends from on high, eventually leading to him drowning in the middle of the vast water (the standout shot of the film).

The effects throughout were impressive, from the water sequences to the gradual transforming of Ben into an amalgamation of different people, the Cronenberg style facial prosthetics looked great as well as messed up. I feel the main message of the film is the worry of losing your own identity when forming a partnership. No longer being able to be an individual but instead forced forever to be part of a whole bigger than yourself. Marriage and commitment in general is shown here as something insidious, that slowly transforms a person until they are no longer the individual they strived to be. Much of the short charts Ben's dread of this impending and seemingly inescapable commitment.

I would be lying if I said that I understood all of the Pursuit Of A Jigsaw, I did appreciate how it was all put together, this was apparently made on a micro-budget yet it looks great, the 1950's aesthetic fitting this very well. A strangely chilling tale of what should be the end goal for the pursuit of happiness, yet ends up being more like The Thing. Pursuit Of A Jigsaw can be seen on Alter's YouTube channel, for something very different I recommend checking this out.