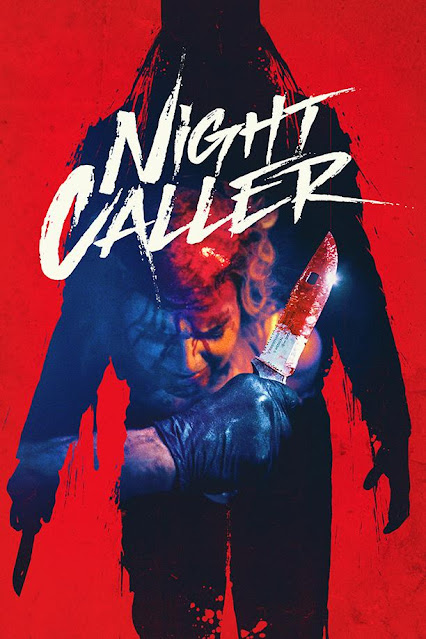 Night Caller is an award winning indie horror that was written and directed by Chad Ferrin (The Deep Ones, Exorcism at 60,000 Feet). As I often do, I declined to read up on this movie before viewing it, and so I was surprised with the direction it went in. This has a nice vibe of a seventies grindhouse movie, yet visually it is a lot sharper whilst keeping the story in that zone.

Clementine (Susan Priver - Serving Up Richard, Space: Above and Beyond TV series) is a telephone psychic who one dark night receives a call from a strange man calling himself James Smith (Steve Railsback - Ed Gein, Lifeforce). Having actual psychic abilities she is given a vision into the man's future and realises with horror that he is just about to murder someone, but is powerless to convince him from going ahead with the act. After several more call ins from the killer, Clementine realises it is up to her to try and stop him, figuring the police won't take her seriously. The more she investigates, the closer the killer gets to finding her, and it soon becomes clear that they both share a common bond from their distant past.

I really enjoyed this twisted dark horror. Visually this hasn't a crisp clean look to it, film grain and the dark lighting made it look a little like it was a VHS tape I was watching. This was no faux attempt at recreating the look of old films though, this felt like more than just a tribute to old films. One part I liked a lot about Night Caller was the cast of actors, with the exception of the flashback sequences there are not any young ones here, it felt refreshing that the protagonist was played by an older woman, that the antagonist himself was also older. Priver was a good choice of leading lady, she is fleshed out enough to be someone worth rooting for, something which was achieved mainly with her interactions with her invalid father, the excellent Charles Carter (Get Gone, Donnie Brasco) who did a great turn as the horror film obsessed bed bound ex-detective. The antagonist was also interesting, a cross-dressing killer who never once speaks in a normal voice, either almost a growling whisper, or a more high pitched voice when wearing the hair and face of his victims. The film does wonders with keeping this character in darkness, while the disguise he wears means even when he is fully on view you can't really see anything about him. In one possibly hallucinatory scene, the killer speaks to his father, this features a near stand out performance by Lew Temple (The Devil's Rejects), and shows Night Caller's more darkly comedic side in what was a wonderful scene.
As good as many of the performances were, there were some characters who I didn't get on so well with or were otherwise underutilised. I liked the sub plot of Clementine's abusive separated husband but it felt like it had a little more potential than what we got. Then there is the character of Jade (Bai Ling - Crank 2: High Voltage, The Crow), Clementine's psychic hotline boss who was pretty much a pure comic relief character, someone that became a bit irritating due to their high energy.

The film has a gritty and seedy feel to the locations, helped with most the film taking place during the night. Alongside this are some nice and violent looking effects. The killer being a scalper there are a few scenes of him doing that, one gruesome moment where he cuts a victim's face off. His main method of killing is stabbing, and this effect is used nicely on a few different occasions, including a nasty looking part where hwe is repeatedly stabbing someone in the face in close up detail. The concept of Clementine being a psychic means we get to either see scattered quick edits of a kill before seeing it in detail, or even witnessing a death that then doesn't take place due to the future being altered as a result of her visions. There are some scenes that ooze threat, where you as the viewer knows something bad is going to happen and waiting with anticipation for the lovely payoff.
I liked the cat and mouse interactions between protagonist and antagonist, blending the supernatural in with a serial killer plotline was also a good idea. I did think that perhaps the eventual reveal of just who the killer was, wasn't the most exciting of choices, purely with the convenient way this is quickly revealed, rather than teasing it out more over the course of the movie.

I really liked Night Caller, it is a film that pays homage to grindhouse films without being a parody of one. It could be accused of not being politically correct, but this just fits the style that the director is going for, and comes down to the nasty characters themselves rather than any kind of agenda from the filmmaker. With a great cast and a solid plot, this was a horror that I loved my time with. Night Caller comes to Digital HD and Cable VOD on May 13th across North America.

Posted by Daniel Simmonds at 06:30