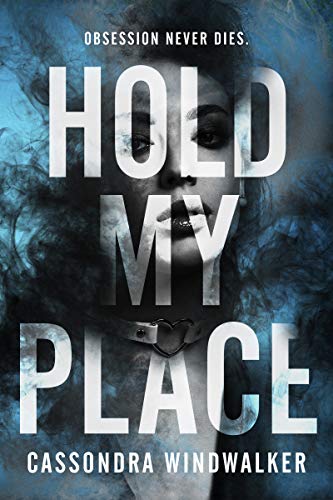 Hold My Place by Cassondra Windwalker is a horror novel which really does a lot to hide that fact. By the time I had read a quarter of this 256 page novel I found myself having to go off and have a read of the synopsis just to make sure it actually fitted the criteria for this blog. While not the largest book, it is perhaps testament to my enjoyment of this that I read it in under a week which is high praise from someone who is typically so slow at reading that nations rise and fall as I work my way through novels.

Sigrun is a Goth librarian in her early thirties who falls head over heels for a cook named Edgar. They form an immediate connection despite Edgar being married, but after his beloved wife Octavia dies due to Covid it isn't long until the two start a whirlwind romance with the two not long after married. It is then that Sigrun learns that Edgar has been in three intense relationships before, each of his three previous partners have ended up in early death, with him reaping the benefit of their life insurance policies. Despite this however, Sigrun cannot see any evidence of malice in Edgar, who presents himself as the perfect and most loving man, and wanting to love him as much is humanly possible, she, with Edgar's blessing, starts to delve into the lives of his former partners and in doing so starts to take on some of their traits.

Right from the start there is a hint of future darkness to come. It was actually something I had forgotten about, but the short prologue ends with Sigrun (at some future point in time) stabbing Edgar. The majority of the book then charts the events that led up to that drastic moment, the whole novel is told from the perspective of Sigrun. The first person perspective is utilised well, you come to know Sigrun's thoughts and feelings, while early warning signs flash bright red, but from the biased perspective of the person telling the story, she doesn't spot these signs or dismisses them. There is an implied supernatural element to the novel that only becomes more apparent later on, but there is enough wiggle room that you could argue that there isn't anything actually supernatural here at all. This helps with how Sigrun acts, something that felt very real.

I'm sure everyone knows of people who have gotten into an intense relationship and withdrew from the world, former friends made strangers due to falling into a bubble of sorts where everything outside of the love interest fades out of focus. Windwalker presents Sigrun's irritability of having to be outside Edgar's zone of influence, while with the character of Evan (a friend and colleague of Sigrun's) you get to see the outsider perspective, someone whose world hasn't changed, but loses a friend regardless due to their whole viewpoint on life changing irreversibly. I appreciated elements like that which grounded the (supernatural or gaslighting) story. What actually occurs here I have seen in plenty of horror films, but I haven't actually ever seen the idea in a novel before, so for me this felt fresh. I loved that with the story being told from Sigrun's perspective the horror that begins to unfold is unnoticed, for her, wearing her husband's ex-wife's clothes is a way for her to feel closer to the man, but as a reader that seems quite a disturbing thing to do, the reader here joining Evan's misgivings.

Hold My Place despite the horror elements, remains mainly a love story. How love can transcend death, and how selfish intoxicating love can have a real dark side to it. It may take a good while for the vibe to insidiously flip but I loved reading this. It was written in a simple style that made the words flow like a hot knife through butter. My only complaints with the novel were perhaps that once events have reached a crescendo the story quickly burns out within the span of a couple of pages, but that's just nitpicking. Not a traditional horror story, but one that has a layer of darkness simmering away mostly unseen throughout what is mainly a romance novel.