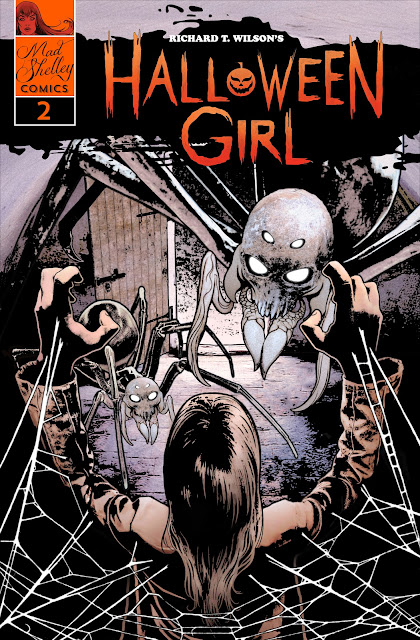 Last week on April 30th the second volume of the Mad Shelley Comics' Halloween Girl was released. Now, I hadn't actually heard of this but apparently it is based on characters that appeared in the film The Halloween Girl and its sister web-series Under the Flowers. The star of this is an eighteen year old ghost named Charlotte, who, along with her supernatural friend Poe do their best to protect Charlotte's hometown of Crystal Springs from an evil secret society known as The Hollow.

Starting with issue 1 (VOL.1: Secret to Keep, Chapter 1: Candy From Strangers), this had a story written by Richard T. Wilson, with art by Stephen Mullan. While I wasn't a hundred percent clear on any of the backstory the story itself was easy to follow. After a trip into the 'In-Between', Charlotte is provided clues as to what she should be doing in order to protect her town. In this case it is a Halloween bucket in which a giant spider was dwelling. Back in the real world she spots a young boy wearing a spider costume being bullied and so makes herself corporal in order to intervene.
The art is in black and white and was crisp and simple. Panels were not deeply detailed but I liked the cleaness this created. A lot of the issue revolved around conversations but the panels remained interesting by utilising plenty of different angles so that instead of a static feel the panels felt dynamic, like the characters were actually moving around. The horror slowly introduces itself leading up to a cliffhanger finale that made me glad I also had the second issue to read!

Issue 2 (Charlotte's Web) wraps up this particular story and was more action packed then the first. Again at thirtish pages this was something I breezed through. This two issues almost reminded me of Buffy the Vampire Slayer in how they were paced out. A 'villain of the week' type situation that nonetheless ties into a greater tale. These first two issues worked at establishing Charlotte as the protagonist she needs to be, discovering powers she didn't know she had.

Halloween Girl was an enjoyable read, the clear art allowed characters to show their emotions on their faces, while the story was easy to follow. For me personally I would have preferred a darker story, but it certainly headed in that direction after its non threatening beginning. While the ongoing story didn't dig its claws into me there is potential for this to become greater. Vol. 1 is set to be comprised of seven issues, issue 2 is out now via Kindle Comics (Amazon), with a third one due out later this year.