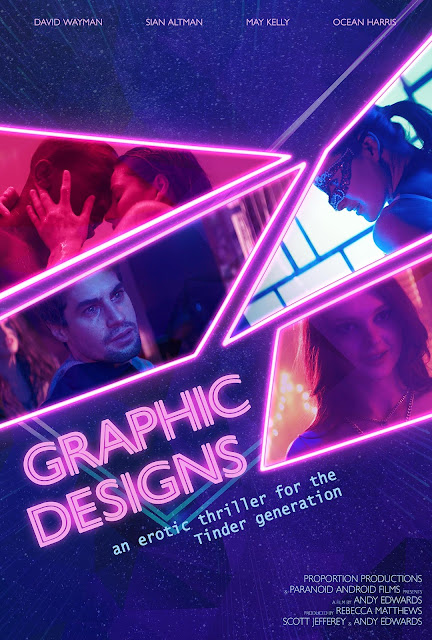 Franklin (David Wayman - Little Devil) is a work-at-home graphic designer who appears to really resent his relationship with long term girlfriend Candida (Sian Altman - T H E M) and also happens to be really into watching cam-girls on his laptop. One evening his best friend, Brandon (Ocean M Harris) tells him about a new dating app he was designing, which is the place to go for casual flings. With Candida away on business, Brandon decides to give it a go, hooks up with a girl he meets (May Kelly) and ends up sleeping with her, filming their hook-up. Becoming obsessed with this girl, and with her dating profile deleted from the app, Brandon starts to try and search out her location, convinced that something terrible has happened to the girl. Meanwhile, having been asked to assist in tracking her down by using his knowledge of the dating app, Brandon reveals all of this to Candida, who is upset, but unable to confront Franklin as her and Brandon are having an affair of their own! On her own, Candida sets out to find the girl and confront her over her boyfriend's cheating.

Starting with the character of Franklin, he is one of the more emotionally unavailable people I have seen in film. His always pretending to be working, and distant uninterested conversations with Candida put me off him, at least until it is revealed she has been cheating on him for a long time. There are two distinct plots going on in the movie with both members of the couple getting their own storylines going on. Franklins was the most wild due to him bizarrely thinking that human trafficking is going on purely because a girl removed her profile from a dating app. Candida does her best to upstage him as her search for answers has her inadvertently becoming a cam-girl, working for a masked man known only as The Cowboy. Honestly, both storylines were pretty bonkers with both protagonists doing drastic things for stupid reasons. It made the story a little hard to take seriously, especially towards the end where the thrills and stakes increase massively in a way that I was unprepared for. It all ties together with a reveal that felt very of the moment. It was interesting how the movie could be taken differently on a second watch, not that I will ever do that.

Being an erotic thriller there are lots of sex scenes. All throughout the film there is nudity, a few moments of full frontal and plenty of breasts and butts. None of that was for me, I appreciate the soundtrack that plays out during these scenes asit was a great piece of music that fitted the film well, but I did start skipping past the sex scenes as there seemed to be one every five minutes or so. Some of the locations used looked good, the Cowboy's HQ for instance did a lot with a little, making for a good choice of location for the finale. Lighting throughout was one of Graphic Designs strong points, lots of scenes take place in the dark, but with different light sources creating scenes that were easy to see.

I appreciate where the plot went, the eventual reveal and explanation for everything wasn't something I expected, though personally I wish there had been a flashback sequence to lay everything out. There is a definite sense of an unreliable narrator type situation with at least some scenes shown on film not technically happening as they appear. My main complaint, ignoring too many sex scenes, was that the protagonists just were not that engaging, I couldn't understand either Franklins' or Candida's character paths. Still, if erotic thrillers are your thing then add another rotting zombie head onto my score, it was well made and kind of interesting and had a good soundtrack at least. Graphic Designs is due for release on 8th August from Free Fliers Films.

Posted by Daniel Simmonds at 02:50