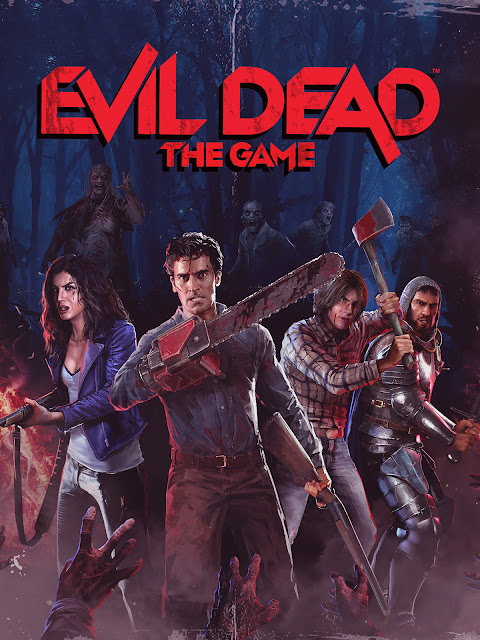 Evil Dead: The Game released last Friday, and I wasn't intending on buying it as it is an asymmetrical multiplayer game. However, seeing it was not as expensive as I thought it would be (£35 here in the UK) I decided on impulse to get it. I haven't played nearly enough of it to be able to write a review, but I have played enough that I feel confident in at least giving my first impressions.

There isn't a story to speak of, instead each game features the same objectives that take place within a small handful of maps. You play as either a survivor or as a demon and these take in monsters and characters from not only the three Evil Dead films (The Evil Dead, Evil Dead II and Army of Darkness) but also the Ash vs Evil Dead TV show. Having all these different bits of media together was a delight to see. On the survivor side you have four different versions of Ash, Kelly and Pablo from the show, as well as plenty of other characters from the films, even having two knights from Army of Darkness making an appearance. These survivors fall into one of four categories, Leaders who are immune to fear, Warriors who are good with melee weapons, Hunters whose strong point are ranged weapons, and Support who are able to heal other players.
On the demon side you have a choice of three, The Warlord (Henrietta from the first two films), The Puppeteer (Eligos from the TV show), and The Necromancer (Evil Ash from Army of Darkness). These different demons have different abilities which you can probably guess from their names, but they also have different deadites under their control. Henrietta can boost deadites strength when she is around them, these enemies are the traditional type. The Puppeteer can more easily possess characters, his deadites are ones that explode upon death. The Necromancer controls a skeleton army and can resurrect them when they have been defeated. 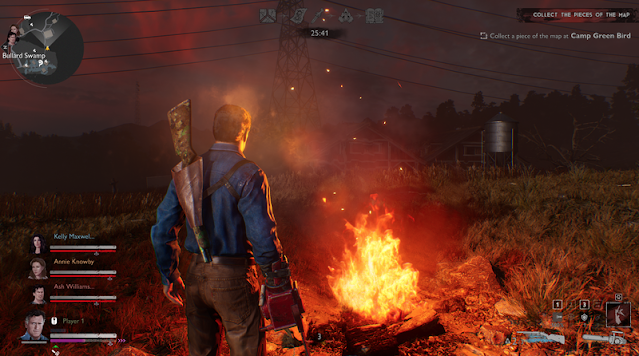 Playing as the survivors in third person, you must work together to first collect pieces of a map. Once this is done then the location of the Necronomicon and the Kandarian Dagger are revealed, and once these are collected the players must race to a gateway and banish the Dark Ones, thus winning the game. Players have a fear metre and this fills up both by being in the dark, being attacked by enemies, triggering traps, and being away from the group. Should your metre get too full then the demon player will be able to briefly possess you, able to both attack other players and move you out of the group. While the demon player is the main foe there are plenty of random deadites spawned around the level. Playing this felt like a mix between Left 4 Dead, World War Z and Dead by Daylight. There are nowhere near as many enemies as you would get in those first two, but being able to use weapons (both melee and guns) means that there is a lot of time spent battling deadites. The pitfalls of being a multiplayer experience means unless you are playing with friends you can never predict how things will turn out. Sometimes I played and had a wonderful time, the four of us working together and really helping each other out as a team. Then there are other times when the game starts and the other survivors all run off in random directions. Needless to say, that is not a good idea and each and every time that happened we were all dead within five minutes of starting.

Playing as the demon can usually be a more fun experience. You control an invisible force in first person. There are a variety of abilities you get, but these require fear points to unlock. As the game progresses these slowly get given based on survivors getting into troubles. You can summon both a regular deadite as well as a more powerful one, you can set up traps at predetermined parts of the map, you can posses survivors should their fear metre get too high, you can possess trees and cars, and level up enough and you are able to manifest on the battlefield as whichever demon you have chosen. Each of these three demons have their own abilities, such as Henrietta being able to projectile vomit and Eligos being able to teleport. All of these abilities require energy to do, and this is dotted around the map. Managing this energy is a component of the demon's experience as everything requires decent amounts of energy to use, while everything is also on a cool down timer. During key moments during the game, such as survivors activating the Necronomicon or Kandarian Dagger as well as trying to dispel the Dark Ones, your metre automatically refills, letting you cause more mayhem. The game seems to be stacked against the survivors as if they make it to the end then many of the demons powers will be maxed out. Saying that however I had some pretty shocking games as the demon where everything was going wrong. 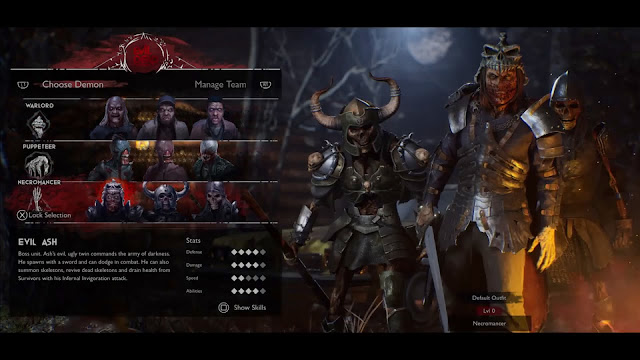 Playing as survivors or demons will give you experience. Each character has a pretty hefty skill tree that requires a huge amount of points to unlock stuff on it. In that respect there is replay value here. There is surprisingly also five single player missions to do (a sixth one to be released at some future point). These each take place during a key moment in one of the films or TV shows, the first one for instance is set during The Evil Dead and has you as Ash needing to take your girlfriend's severed head to the shed in order to destroy it. Five missions may not sound a lot but currently these are nightmare hard, I'm stuck on the third mission at the moment, I must have attempted it around thirty times. I wouldn't mind the difficulty if not for the fact that a bunch of characters can only be unlocked by completing them. I really want to unlock Pablo but to do that I have to complete mission four!
My concern at the moment is that the small amount maps may lead to boredom. The graphics are great (some really violent looking finishing moves shown in blood detail) but I can't really tell how many maps there are as they all look kind of similar as obviously they have to take place at night. The maps are huge, and the objective locations are randomised which are both good things, and a new map taken place around the castle from Army of Darkness is coming soon for free, also welcome. There are also various weather effects which do change up the feel. The last match I played for instance took place during torrential rain, while previous I have had a map be covered in snow. One area the game feels lacking is the sound department, especially the dialogue. Survivors occasionally say a catchphrase but the deadites feel almost bizarrely silent, it feels like them not shouting threats and curses at you was a missed opportunity to make the game feel more alive.

There is a season pass with four different bits of DLC promised so I hope that brings with it not only new maps, but also new survivors and demons. For all the fan service here there are things I would love to see added, such as the hand puppet Ashy Slashy for instance! Less than a week old it is too hard to say how long this will remain populated by other players. If you are both a fan of Evil Dead and like playing multiplayer games then this will be for you, if you are a person who mostly plays single player games then perhaps wait for a sale. Personally I fall more into the later, but I just had to check this out.

Posted by Daniel Simmonds at 04:52