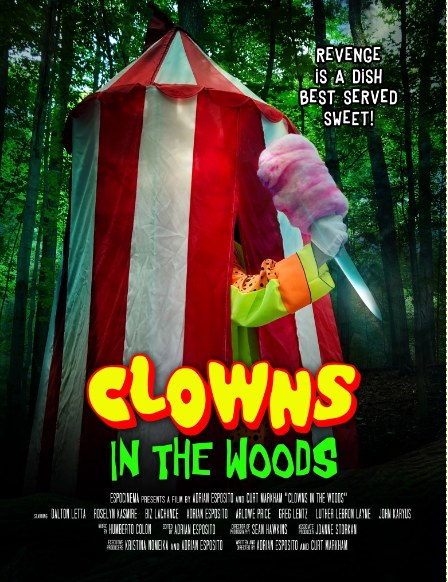 Clowns in the Woods was a horror film that had the intention to change the way people with disabilities are seen in horror movies. This was written and directed by Adrian Esposito and Curt Markham, Esposito himself is autistic and so hoped to bring with him a fresh perspective. This was also inspired by the 2016 USA clown sightings craze, which it is thought, initially actually originated back in 2013 in my UK home town of Northampton.

Marcus (Dalton Letta) is a young man with learning difficulties who is constantly harassed by a local group of bullies. On Marcus' birthday after one such encounter, the man ends up running out into a road and getting knocked down and killed by a passing car. In the afterlife he encounters a group of clowns (including Esposito as head clown, Rosco) who offer him the chance to get his revenge on those who wronged him. Marcus' next door neighbour Amy (Roselyn Kasmire - Rust Belt Driller) and his brother James (Biz LaChance) begin to get alarmed when the people indirectly responsible for killing Marcus begin to turn up dead, murdered at the hands of unknown assailants. Soon, with glimpses of creepy clowns around town, they begin to investigate the history of who these people could be. It turns out that the murderous clowns won't be satisfied with just helping Marcus, as they need their special book back (the source of their power), and it happens to be in the possession of Amy and James. This film tells a story of revenge in a simple manner. The film ticks all the right boxes but does feel a bit 'horror film by numbers' with all the elements you would expect. There is a large body count but many of these death scenes lack impact due to a reliance on CG effects, especially when it comes to victims who are set on fire. There are also practical effects that while not looking realistic are fun to see. Moments such as a hatchet wound on a hand that includes lots and lots of spurting blood, and an early decapitation are fun to watch. People running around with digital flame effects on them not so much. This also felt better when the kills were clown related, such as one knife attack whose handle was made out of candyfloss. An area where Clowns in the Woods really excels is the creepy design of the clowns. Aside from Rosco you have Jingles,a mallet wielding large clown with a high pitched voice (played wonderfully by Arlowe Price),  the grotesque mask wearing Jekko, and the mute Jester who carries on his hand a puppet (voiced by John Karyus) that does all the talking for him. These clowns all looked effectively creepy and were full of one liners for each time they killed a victim.

As fine as Amy and James were they didn't make for the most exciting of protagonists. No character in the film every shows much sorrow whenever someone they care about are killed, pretty much literally no sadness, more annoyance. Then there is a subplot involving a reporter investigating the killings which ends on a cliffhanger in the films second act which is then never resolved. On the plus side, this film does have a decent message at heart, in particular it brings up the issue of discrimination against both people with learning difficulties and discrimination against the LGBT community with several characters here being gay, including protagonist Amy. The cast also includes people with real life learning disabilities which accounts among them a down-syndrome man who had a fun role.While some of the digital special effects may leave a bit to be desired I did think some of the props were used well. The key clown story book was used at several points and had a good design to it. I also enjoyed the intro credits that includes black and white footage from clown films of the fifties to sixties. I don't have a remote fear of clowns, but I imagine if someone did they would find all this hard to watch as that old footage looks plain sinister!

Clowns in the Woods despite its subject matter felt like it played it a bit safe plot wise. There were parts of it I liked but it didn't feel that original with how it all played out. The strong design of the killer clowns helped this from being a forgettable horror however, it may have underwhelmed at times but it managed to not get dull over its ninety minute runtime and you could tell there was heart put into the creation of this. Clowns in the Woods is currently available on YouTube, Google Play, and Amazon Prime.

Posted by Daniel Simmonds at 11:25