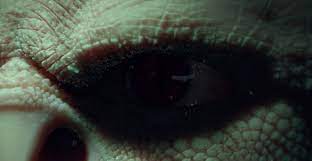 Ancient Voice is a short Turkish horror film that was directed by Can Sagir, who also co-wrote this along with Erdeniz Tunç (Serenity). By my reckoning it is only the second Turkish horror film I have seen, after 2017's Baskin. This indie low budget horror uses a monster from Turkish mythology as the basis for its story, in this case the Obur which is apparently a vampire-like monster.

In the present, a young journalist named Zeynep (Berna Toy) is writing a letter that details her account of visiting a supposedly haunted derelict building along with a young man named Efe (Samet Kiziltas). While she stayed outside the building, she communicated with Efe via phone who was inside exploring. It was his shocking discovery that led to Zeynep fleeing the scene.

At just over five minutes Ancient Voice manages to still tell a complete story. I have always been a fan of the concept of having a main story be presented as a flashback, and with Zeynep writing a letter that is the format gone for here. Being a low budget indie film means that there isn't too much actually revealed on screen, instead there is the smallest of close up images to suggest what the two encounter. An interesting looking shot that I assume may have been CG, and which leaves a lot up to the viewers imagination. There was good atmosphere, helped by a moody soundtrack, but the horror, at least in the present day moments were let down somewhat by a scream that sounded a bit placeholder, like it wouldn't have came from the main character. It also didn't feel like what occured in the flashback would have been enough to cause the character to flee the scene in the first place, rather than investigate themselves.

Ancient Voice isn't a perfect film, the beats used for the horror moments didn't really work for me, but the general idea of what it was going for worked well. This felt more polished than you might expect, and I liked that it took itself seriously, that made the overall feel work better than if it had been played for laughs. At such a short length this doesn't outstay its welcome so I feel it is worth a watch.