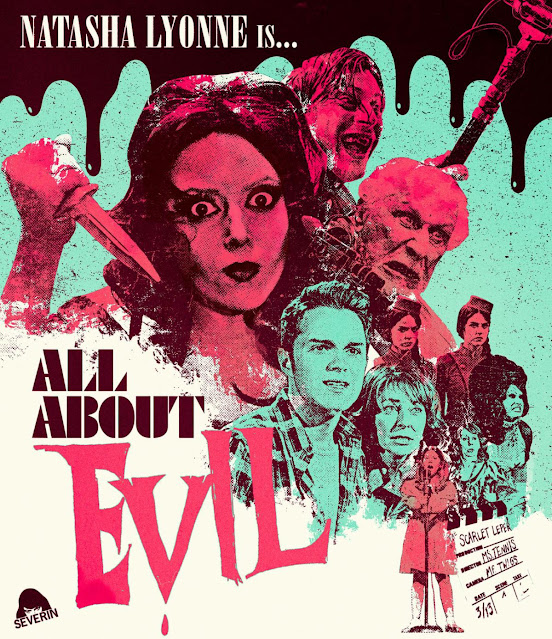 The Joshua Grannell (better known as his drag persona, Peaches Christ) written and directed comedy splatfest that is All About Evil is something that I can see not appealing to everyone. Apparently this film only had a limited theatrical run upon its release in 2010 and since then it has been very hard to find. That has all changed with a Blu-ray release coming on June 10th from Severin Films and a North American streaming release on Shudder arriving June 13th.

Deborah Tennis (Natasha Lyonne - Russian Doll) has taken over the ownership of her father's beloved but unsuccessful indie cinema after he passes away. With its closure threatened by her nasty stepmother, Deborah ends up killing her in cold blood, the incident recorded on the cinemas CCTV system. Due to a series of errors she ends up accidentally playing the CCTV footage of the murder to the patrons waiting for a film to start in the theatre, and unexpectedly they lap it up, figuring it to be an experimental short horror. Deborah relishes this new found fame and sets out to make more horror films featuring real victims rather than actors. As her fame increases, she hires several helpers, including the old projectionist Mr. Twigs (Jack Donner - Stigmata), a criminal psycho, as well as twin sisters recently released from a psychiatric home (Jade and Nikita Ramsey - A Haunting at Silver Falls). Together they set out to make bigger and more violent films, until a young teenage fan, Steven (Thomas Dekker - A Nightmare on Elm Street) begins to get concerned about the amount of missing people whose last known whereabouts was the old cinema. 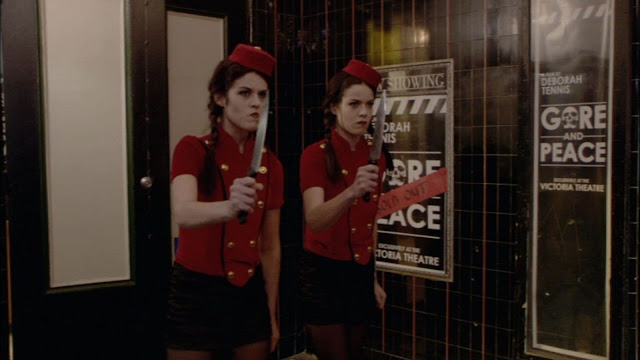 This is comedic but not in the sense of telling lots of jokes. Instead it is comedic due to the larger than life personalities of many of the cast. The villains are comically evil and delight in the murders they cause. It can be quite fun when the antagonists are all together, each with their own things going on, from the silent twins doing the usual The Shining style trope of acting as one, to the creepy old man Mr. Twigs, and Deborah herself who sees herself as a serious actress and so dresses up in various costumes for her snuff films. Countering all this is the protagonist Steven who really was a bit of a bland character. Being a horror movie fan he is seen as weird by many of his peers, his teacher in particular thinks he is a high school killer in waiting. It is his love of the genre that is used as a weapon in the films later sections. My favourite performance went to Steven's mother, played by Cassandra Peterson (best known as Elvira).

In the style of splatter films this one is full of blood and gore. When the second death involves the victim having their breasts sliced off by a guillotine you know this isn't something to be taken seriously. Elsewhere someone has their lips sewn shut, and there was an amusing part when a severed body falls from a height and lands directly over someone, becoming stuck on their head! None of this violence is meant to be taken seriously and that is reflected with the style of acting. Even with people dying in and around them the blood hungry crowd seem comically unaware right up until the end. Special effects were decent, while I'm not convinced rat poison would actually make a person's face look that way it was still effective. Elsewhere with the filmmaking itself, I enjoyed the films within a film aspect and I liked the chaotic energy of kills taking place right out in the open, with the staff hurriedly cleaning things up. These short films within a film kind of use found footage in them being filmed by characters within the scenes, mixed in with more traditional shots. 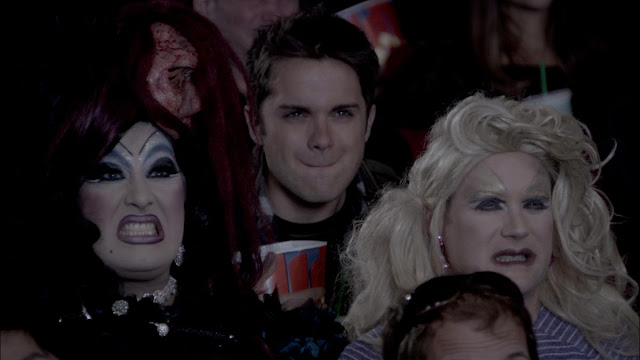 While the antagonists worked well in the over the top department, it did lead to other characters seeming dull by comparison. All About Evil was never able to cohesively fit together these two different styles in a way that felt natural. Get away from a bag of mixed performances and you have a schlocky indie horror that doesn't shy away from some bloody scenes, and it all comes together with a wonderfully bloody finale featuring some lovely looking shots and plenty of mayhem.