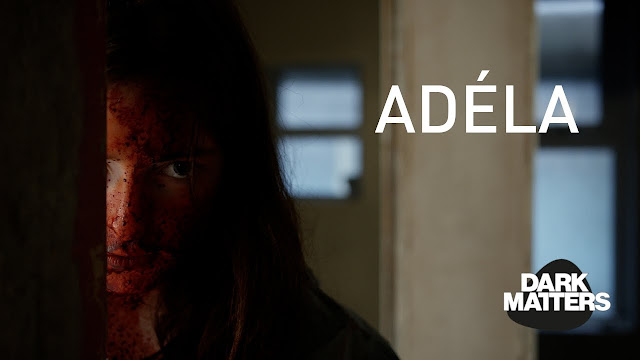 The review today of the Philip Martin (The Road) written and directed Adéla is the first of three short films I have watched for review this week. This premiered on the Dark Matters' YouTube channel back in April and takes a familiar subject and tweaks it into something different in feel.

The six minute short begins and ends with narration in Polish from the titular character (Julia Rogers - Back From the Dead), she speaks of her brother Jacek (Ged Purvis - Teens Vs. Vampires) who she says is a bad man, but she views as her saviour. A talkative young man (Chris Iddon - The Shadow over Whitby)  meets Jacek with the aim of buying some drugs off of him, they end up going back to Jacek's house where he tells the man the drugs are kept.

I liked the framing of this short, it feels like it is wrapped neatly thanks to the opening and closing dialogue from Adéla. I liked also how the horror was presented here, a lot coming from a character's silent expression of horror as they come to realise the danger they are in. Using a chilled and calm soundtrack over what becomes a very bloody scene was also a choice I really liked.

Neatly framed, well edited and with some good vocal performances, Adéla was a solid little horror that took a familiar idea in a slightly different direction. Good stuff and well worth a watch.