You Might Be the Killer (2018) - Comedy Horror Film Review 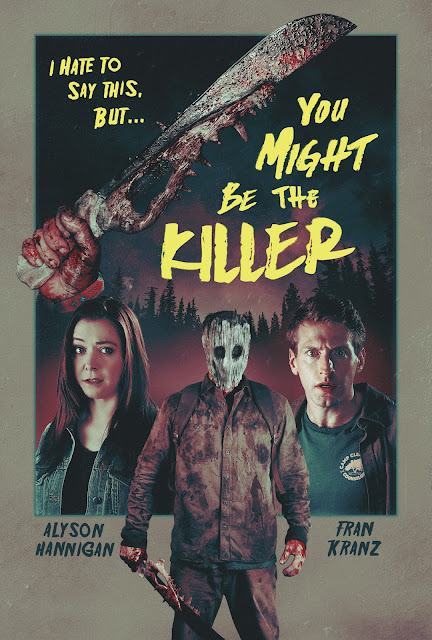 Directed and co-written by Brett Simmons (Animal, Husk), You Might Be the Killer is a comedy slasher in the vein of The Final Girls. A similar idea is used in that at least some of the characters are aware of the typical rules for a slasher film, such as the killer being defeated by the final girl. What sets this apart is that the protagonist realises he is actually the killer himself.

Sam (Fran Kranz - The Village, The Cabin in the Woods) is a camp counselor who phones his best friend Chuck (Alyson Hannigan - Buffy the Vampire Slayer) late one night in a panic. He tells her that there is a masked killer on the loose in his campsite, and that nearly all the other counselors have been murdered. It isn't long until Chuck has realised that it is Sam himself who is the killer, and that it appears to be the work of a cursed wooden mask that he found and which subsequently possessed him. What follows is a back and forth in time as Sam thinks back to what has occured, in order to figure out which of his former friends are still alive, and for a way to end the night without being killed at the hands of whoever the final girl turns out to be. 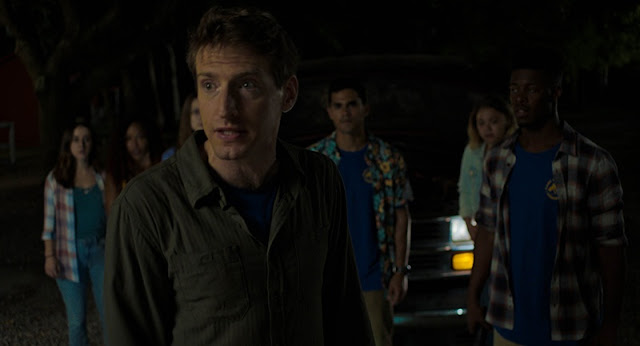 It isn't much of a spoiler to say Sam is the one responsible as it is very early on this is revealed. The film mainly takes place in the past, and it doesn't even follow a linear path. Instead the film reverts back to various points in the night, sometimes heading back to particular kills, sometimes heading back further. For the film's third act events finally follow a cohesive path in the present, but I thought the idea of constant flashbacks worked well. A lot of the counselors didn't have much personality at all to them, but this made some of them more fun. In particular there was one named Steve, and nearly every single time the character is mentioned his moniker of 'Steve the Kayak King' is said in full, even when his body is discovered. That was one of the more fun running gags. The problem I had with Chuck is that she is so far removed from the events of the main story that it didn't really feel like she was even in the same film. While Sam is in a dark and dingy woodland camp, Chuck is in a brightly lit comic book store separated entirely from the other characters. I wondered if this was due to Hannigan being a bigger name and so her character was utilised in such a way as this in order for her pay to not be too high (apparently she filmed all her scenes within two days). Keith David (The Thing, They Live) is also featured in a similar way, his appearance just a voice on the end of a phone, but that role felt more smoothly implemented.

While this is a comedy it also has over a dozen kills, quite a few of which are repeated as Sam goes over the same memories again and again. Many of the kills were stomach stabs, sold by squelchy sound effects, there were a couple of more entertaining looking ones, such as a character whose head gets split open vertically and a nice looking decapitation. It was suitably bloody at times, so on that front things were good. The humour was decent mainly, but it was never laugh out loud funny. The main joke was Sam discovering to his horror he was the person responsible and things didn't really progress much past that. By the end when the surviving characters were trying to find a way to beat the rules of the slasher genre the film got maybe a little too earnest. Personally I wish this had been funnier, Sam was a fun character to follow, but most the rest of the cast had no personality and barely any screen time to do anything other than be killed. 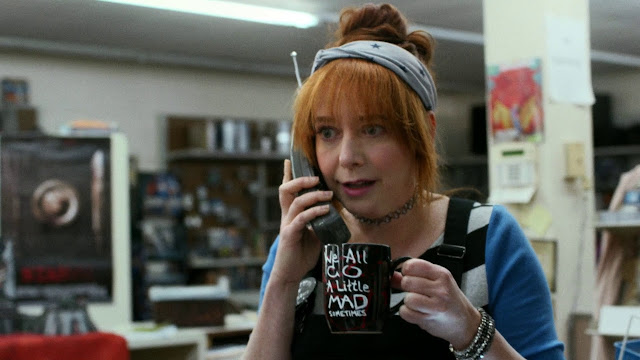 Starting at the end and working its way back was the best thing You Might Be the Killer did, there was nothing in the film that could compare to that first act, and the story went down a path that didn't really go anywhere unexpected. Still, despite the issues I had with it, it was decent enough escapism, joining a bunch of films in a comedic sub genre of the slasher genre that hasn't yet gotten bloated. You Might Be the Killer can currently be streamed on Shudder.