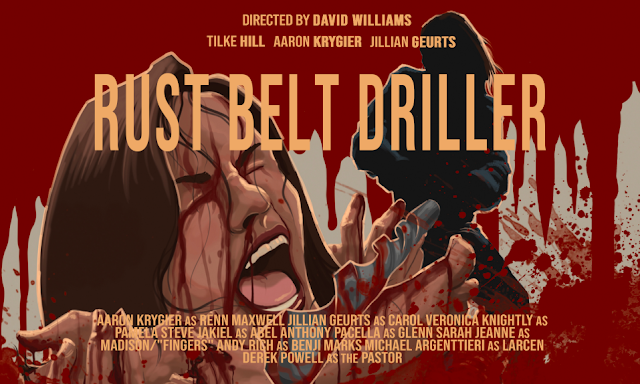 Rust Belt Driller is one of those films that improves throughout its run time. It took awhile to acclimatise to the freakishly surreal world of the movie which goes pretty art house at times, but once I did I was fully on board. Occasionally I was repelled, more often than not I was bizarrely entranced.

Renn Maxwell (Aaron Krygier, who also wrote this) is the very definition of a tortured artist. He is successful but at a cost, he feels he has never been true to what he is actually like. When the film begins he has reached his breaking point, and with a new burst of creativity comes increasing insanity. Haunted both by a vampiric muse only he can see, as well as a shadowy well dressed figure (Derek Powell), the artist resorts to murder by drill to feed his dark urges.

Co-directed by Tilke Hill and David R. Williams (Red Scream Vampyres) this low budget horror doesn't shy away from revealing the constraints. This mostly appears in the gory murder sequences that feature very fake looking body parts in such a way that I feel it had to have been purposely done. Due to the style of film this actually added another layer rather than took anything away in my opinion. Rather than be straight forward, these murder scenes near all share a unique way to the editing used. Frequently the shots will cut between the victim before they have been attacked, to being mid attacked in a flowing fashion that was really cool to see. The kills come courtesy of a comically large drill which is inferred Renn purchased from an infomercial. Those commercials pop up three or four times over the films length and play out in full. Andy Rich (Sojourn) is perfectly cast as the enthusiastic, yet bumbling host of these sections and are where Rust Belt Driller is at its most silly. These goofy adverts are full of bad acting, poor camera work and continuity errors and mostly worked really well. I did think the final one that went much more into horror wasn't as enjoyable, a bit gross for me.

As a protagonist, Renn seemed a bit of an odd choice of character, he speaks monotone and sparingly, in fact I think there is only one scene in the movie where he says more than a few words, and that is grudgingly. I thought Krygier was great for the role, the lack of speaking means he has to physically act more. Renn says a lot even with just his eye movements, often seeming confused his put upon girlfriend Carol (Jillian Geurts - Hell House LLC III: Lake of Fire) doesn't also see his imaginary muse. My personal favourite actor was Powell, he had such a minor role but was just fantastic, with a cool outfit to boot.
The film can be at times a little bit hard to follow, frequently being shown events from Renn's perspective means I was never too sure what was real and what wasn't. His paranoid world of darkness, of having to control his urges, was well realised, with scenes often turning out to be nightmares. The death scenes are almost outside of the film entirely, with no explanation for how Renn would be getting away with it, often these scene cuts to sometime later with him somewhere else entirely. This adds to the dream like feel this has at times. As an aside, the film features some great psychedelic lighting during key points, the lighting reflects off characters faces in a pleasing manner. 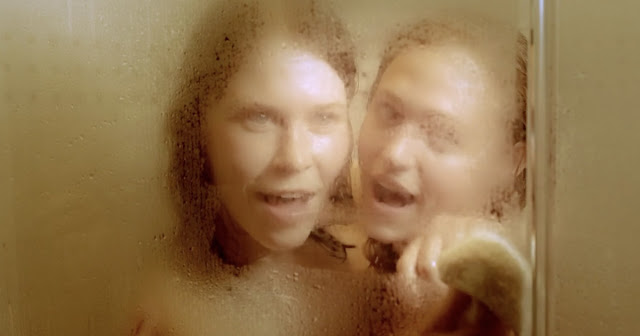 I started off not really sure about Rust Belt Driller, but (like a drill) it worked its way into me and I ended up mostly enjoying it. There was some moments that grossed me out a little (typically anything involving severed fingers and the things they are placed into), and I do feel the fake advert idea got overused one too many times, but other than that this was an enjoyable dip into the shallow end of the art house type of movies. Rust Belt Driller came out on DVD on March 22nd from Bayview Entertainment.

Thank you so much for taking time to give our film a thoughtful review. So grateful!

No trouble at all, I admit I wasn't sure about it but I needn't have worried, it was great!