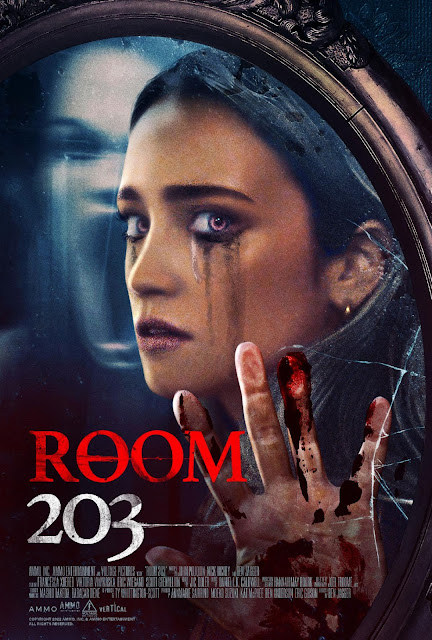 Room 203 is an adaptation of a Japanese horror novel by Nanami Kamon that was directed and co-written by Ben Jagger (Corbin Nash). That this film follows a tried and tested horror formula I could excuse, as this felt like less mainstream horror than these typical types of film (The Bye Bye Man springs to mind as one such example). One thing I couldn't excuse however was the terrible lack of lighting that made a huge chunk of the film nigh impossible to make out.

Best friends Kim (Francesca Xuereb) and Izzy (Viktoria Vinyarska) move into a city based apartment block under renovation, specifically into the titular room 203. Kim is due to begin a course in journalism at the nearby university, while Izzy has vain hopes of making it big as an actress, something that she may struggle to do as she is drinking heavily and struggling to get over both her mother's untimely death, and her own suicide attempt. Upon moving in, they notice a strange hole in a wall that a foul odour is coming out of, Izzy's curiosity leads to her discovering an old necklace within the hole that she puts on. From the prologue (in which the girlfriend of a renovator also finds the necklace and promptly slits her own neck open) it is obvious that this isn't a good move. As the days pass, Izzy begins to exhibit more and more strange behaviour, becoming withdrawn and sleepwalking, Kim, concerned for her friends increasingly erratic behaviour decides to research the apartment to see if there is any rational explanation for her friends derailment. 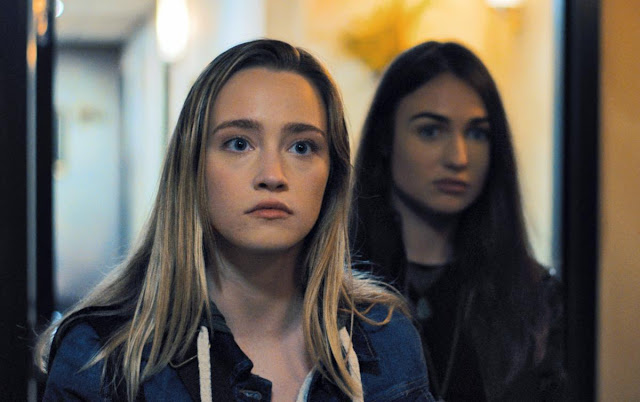 While Room 203 does follow a formula, this being an indie film helps, as does the more dark story going on. From the first act of the two behaving as you would expect young adults would do in a movie (partying and dancing) this soon becomes a lot darker. Unfortunately, as I already mentioned, this literally gets darker as well. I understand they wanted to make the apartment have atmosphere, but making it near pitch black even in daytime was not the right move. This somehow gets worse over the course of the film, leading to a third act finale in which I was desperately struggling to decipher what was happening. There are a few lovely looking shots of characters bathed in the dark, but these are fleeting, all too often I was frustrated and willing any light source whatsoever to appear. It doesn't help that the arrival of the evil force also results in any lights in the vicinity flickering out. The darkness was a real obstacle to my enjoyment, moments such as when two different characters react in horror to what has fallen out of the ominous apartment hole that were lost on me as I simply could not make out what on Earth they were looking at.

Thankfully underneath the cloak of blackness there are some parts to the film that I did enjoy. There is the very traditional research montage in which the protagonist tries to find out the history of the place that appears haunted, this got a pass however as Kim wants to be a journalist so this research didn't feel out of place for her character. Another good part of the film was the supporting character of Ian (Eric Wiegand), for such a small cast of characters, Wiegand stood out as a great actor, it helps that many of his scenes take place outside in daylight, but he took a relatively bland character and gave him an awkward likeability. One other aspect that I enjoyed a lot was the soundtrack, the main theme music in particular really fitted the dark and morose vibe well.

While this may be seen as a bit of a slow burn there was enough always going on that this didn't drag. I thought the antagonist was interesting (something out of Celtic myth) and kept mysterious enough that you are never given a strong feeling of what its intentions really are. What really brought Room 203 down for me however was that lack of lighting, sure there are some fantastic looking shots as a result, but when so much of the rest of it is near enough pitch black I didn't feel it was worth the sacrifice. Room 203 came to select theatres and on VOD on April 15th.