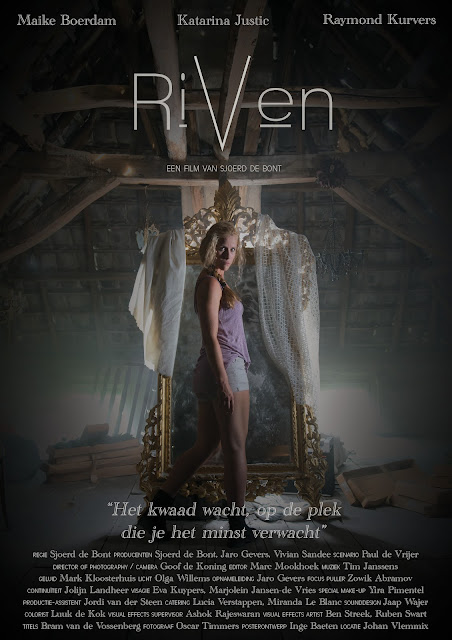 Riven is a short nine minute award winning Norwegian horror film which was directed by Sjoerd de Bont. The flow of this felt almost formulaic but was different enough to what I figured that I was left pleased. This has recently headed to the Dark Matters' YouTube channel.

Sara (Maike Boerdam) is a barmaid who has gone into the dusty attic of her bar in order to find some wine glasses. Once up there however she discovers an old full length mirror covered up, wiping the dust off its surface she is startled to see in the reflection a white door which isn't there. It is her subsequent exploration of where this door could be and what is on the other side that brings in the horror.

There are three actors in this short (Raymond Kurvers as Sara's partner, Willem, and Katarina Justic rounding out the small cast. The character of Sara takes centrestage and after a brief intro she is up in the atmospherically dusty attic, which was a great looking location. The stuff with the reflection being different to what is actually there I have seen before, and even seen done better. That isn't to say Riven wasn't good, I enjoyed it despite heavy use of CG to simulate a particular effect. I for one was happy it didn't end on a jumpscare ending, it had a little bit more of a sinister feel to how this wraps up. The film is in Dutch with English subtitles, but there is only really dialogue at the beginning and end with most the short playing out with Sara on her own.

At under ten minutes Riven is another short that is worth a watch. It makes effective use of a good choice of location, and while it may not feel especially new, this nonetheless  ticked a few of the right boxes.

Posted by Daniel Simmonds at 12:29