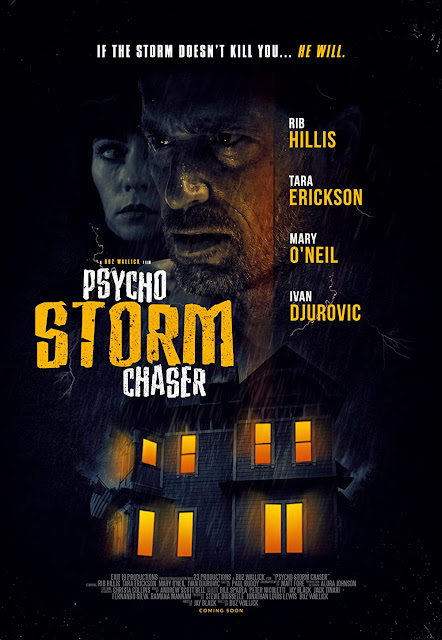 I'm happy to report that Psycho Storm Chaser does exactly what it says on the box. Sure, the film may be dumb and ridiculous, but this Buz Wallick (Twinsanity) directed and Jay Black (Psycho Yoga Instructor) written thriller entertains due a lot to the very spirited performance by Rib Hillis (Jurassic Wars: Sharktopus vs Pteracuda) as the storm obsessed killer.

Carl (Hillis) is a semi-famous storm chaser who has regular shows on the TV about his exploits. Unknown to all however, the man has a dark secret, not only does he chase storms, but he also a serial killer, one who only targets those who choose to ignore storm warning evacuation orders and remain in their homes. His latest target is a nurse named Abby (Tara Erickson - The Twisted Nanny) who has chosen to ignore one such evacuation order so that she can take care of a patient in a coma at the home of her employer, Ella (Mary O'Neil - Psycho Granny). 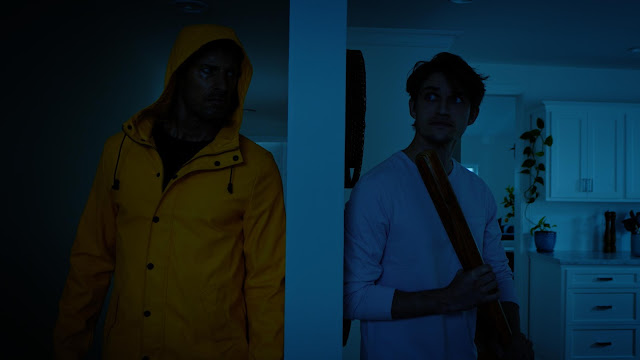 Despite a small cast the film still manages to include an annoying comedy character whose wide eyed facial expressions and joking manner was quite irritating (Ali Zahiri as Tony). Thankfully he doesn't really do too much, so that wasn't as bad as it could have been. While the character of Carl is over the top, it isn't like the rest of the cast are playing their roles without zest either. These are the sort of characters who will try and say a snappy one liner whenever they can, not portrayed as realistic people but exaggerated film versions. The sort of film where no one really seems to take much time at all to get over the death of a supposed friend. Rounding out the supporting cast is Abby's ex-boyfriend, detective Jack (Ivan Djurovic - Zoombies) who was the blandest character here, not leaving much of an impression thanks to the stereotypical character type.

Anyway, for as much as the cast put into the movie it is Hillis as Carl who really steals the show. This guy almost felt like a comic book super villain in that he seems to believe he is the literal physical manifestation of the storm and that he is acting on its behalf. In his bright yellow rain jacket he doesn't attempt to blend into the darkness, though this leads to a recurring gag in that most his victims shortly prior to him killing them, recognise him from the TV. It was amusing how Carl records bits for his show in between kills, even at one point tricking a potential victim by handing them a film camera and acting like they are going to film a bit for him (they actually do, with Carl's little monologue getting more twisted as the scene plays out). The killer plainly spells out his motivation (the death of his wife after she ignored a storm evacuation warning), something you can vaguely identify with. While still getting a bodycount over the course of the film, Carl is pretty ineffective, with a small cast of main characters he repeatedly thinks he has killed them only for them to turn up (slightly bruised) but alive scenes later. He may be bizarrely good at hiding in the shadows despite his bright rain jacket, but his bark is a lot better than his bite. 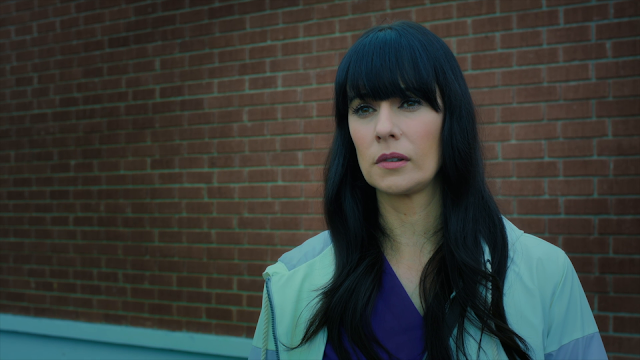 There isn't much need for practical effects here, some which look effective on screen, but most the actual kills take place off the camera, usually just heavily implied. The storm effects were good though, there were a few scenes that took place in appropriately wet and windy locations. Elsewhere you had a soundtrack that wasn't memorable but also didn't do anything wrong. As to the plot itself, the story was silly, but it was entertaining, I also liked how they ended things here, a fun epilogue that made a change to how these sort of films would usually end.

Psycho Storm Chaser isn't a great film, it's barely even good, it is however entertaining, and I'm sure that was what the aim of this was. Characters may be underdeveloped and unrealistic in feel, but all the actors put a lot of energy into this, especially Hillis who really shined with his over the top performance as the unhinged and very talkative killer. Psycho Storm Chaser is due for release on 18th July from High Fliers Films.

Posted by Daniel Simmonds at 05:38