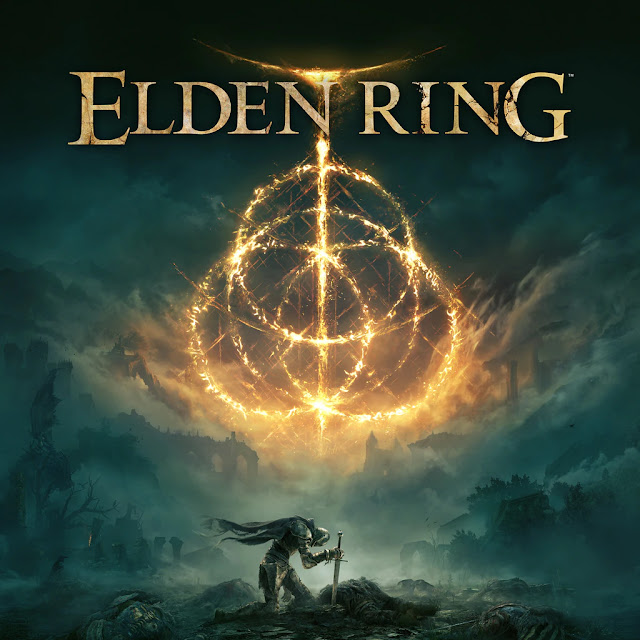 I have always appreciated from afar the 'Souls-bourne' style of games that FromSoftware is a master of, yet the few times I have dipped by toe into Dark Souls I have found it a stressful and daunting experience. I did manage to complete Bloodbourne, but my memory of that is fuzzy. With Elden Ring, FromSoftware has taken all that they are good at and pulled it into an open world setting. I was hesitant to head into this, but boy am I glad I did, as without a doubt Elden Ring is a modern masterpiece.

The story presented here is obtuse, it is up to the player to decipher the game world via descriptions for items found, as well as the spare story drip fed by the various characters you meet. As such, this synopsis is very likely wrong, but it is my limited interpretation. Elden Ring takes place in the Lands Between, a place that was once ruled over by a Goddess known as Queen Marika the Eternal via the power of the titular Elden Ring. An event occurred long ago known as 'the Shattering' in which the Elden Ring was destroyed, with the offspring of Marika battling over the powerful shards left behind. Now the Lands Between is a desolate wasteland, in which the now mutated and corrupted demigods hold onto their shards. You play as a 'tarnished', an exile who has been summoned back to the lands by the Ring's grace. Your aim is to locate and defeat all the demigods in order to collect their shards, so that you can restore the Elden Ring and become the next Elden Lord. 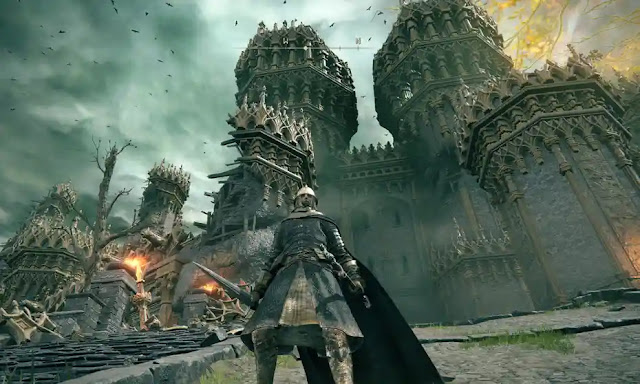 The reason I have never really gotten on with the Dark Souls games is due to their high difficulty, and the way that experience works. Defeating enemies gives you experience points, but should you die you will drop these at the place of your death. Should you die before you are able to retrieve the points then they will be lost forever. The many many sites of grace dotted around the game world are where you are able to spend those experience points to level up your character, as well as carry out various other functions like equipping great runes, allocating mana and health to the flasks you collect, as well as assigning magic spells. Each time you level up the bar gets higher, meaning you need to collect more experience until you can do it again. By the time I finished playing (for the moment), I was requiring around 285,000 experience to level up. On that note, I didn't actually complete Elden Ring, I did however see virtually all the game had to offer. I sunk one hundred and eleven hours into this, making it all the way to the final boss, and having cleared nearly all the secret areas. I feel happy to review this as I have seen so much of the game.

Before, if I reached an area I could not progress in I was completely roadblocked, and that was what typically led to me abandoning these types of game. With Elden Ring being open world this was never an issue, there was always multiple places in the game I could attempt, usually meaning by the time I returned to where I couldn't progress I now could. To begin with the world looked quite tiny, I was disappointed, yet it really opens up leading to a huge open world made up of five giant areas. To get around this world you can summon a magical horse named Torrent, and of course combat can be done while on horseback. You can also quickly teleport between different unlocked sites of grace, and there are no end of the things. If you try and do the default story missions only you will soon get stuck. Instead there are no end of optional dungeons throughout the game, there must be at least fifty of these. Each one typically takes place in an underground tomb or cave system and results in a boss fight. There are also many other places you can explore, mini dungeons in the form of castles and ruins, as well as five main 'legacy dungeons'. These are giant dungeons that feel far more like traditional Dark Souls with convoluted routes and pathways around them. The first of these is Stormveil Castle, a gigantic cliffside castle, other ones include a magical University, and my personal favourite, a dungeon that takes the form of a beautiful looking city that has the colossal fossilised remains of a dragon on it. 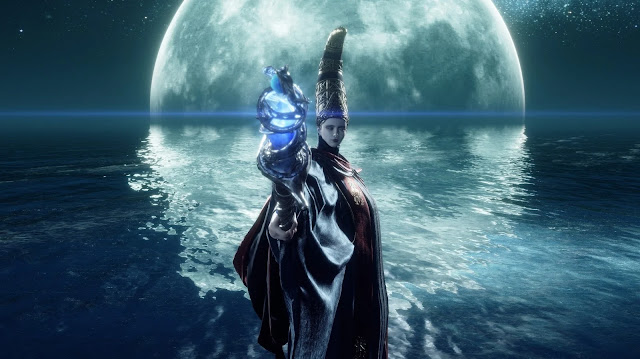 Combat sees you using a combination of projectile weapons, magic, and traditional fantasy style swords. I went with a strength build, so I had on all the strongest armour, most powerful weapons (primarily a sword very obviously based on the one from Berserk), and dragon magic (which you unlock by defeating the various dragons out in the open world). You have a stamina metre to manage, so that when you fight enemies you should try not to use up the stamina, for obvious reasons. You can run, roll as well as backstep, while blocking with a shield gives you the option to retaliate to attacks. The enemies are very varied, from Hellish Scooby-Doo style giant bipedal dogs out in the scarlet rot infested Caelid, to assortments of knights and monsters. There is a heck of a lot of enemy types, though many of these are reused, especially in the optional dungeons that feel much less organic in their design. There are a huge number of bosses, many of these will be repeated multiple times, aside from the main demigods who include such delights as a giant snake with a man's face on its back, to a terribly powerful soldier riding around on a small horse, so powerful that his lore states he once managed to battle the stars, and in their defeat they were frozen in place in the night sky!

The game world looks frequently breathtaking and harrowing in equal measure. There were places that I felt a genuine Lovecraftian cosmic horror at what I was seeing. A huge chain connecting two mountain ranges that you can traverse on your horse for instance, and my personal most horrific moment where deep, deep underground I came across a throne that must have been a hundred foot tall, with the husked up remains of a robed figure sat on it. I felt at moments like that, if witnessed in real life I would have lost my sanity. At times I was attacking enemies out of horror at their grotesque appearances. This was the closest to proper cosmic horror I have encountered in a video game. 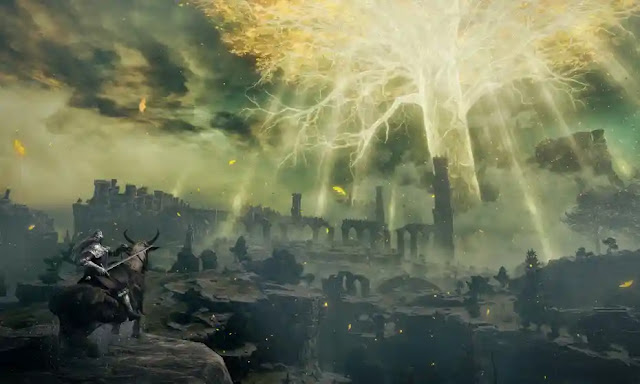 I have talked a whole lot of toot and not really explained just why this third person action RPG is so good. The game is a masterpiece, a very detailed world bursting with secrets, including giant secret areas that you don't even need to go to. From fighting giant ants in the centre of the earth, to traversing the ramparts of a heavenly city, there is insane amounts of variation here. The weakest parts of the game are the formulaic optional dungeons, and the repeated boss fights you encounter there, and this can be very frustrating at times. Take your time however, explore the world, let the atmosphere wash over you, carry out the various sidequests, spend time at the hub area (the Roundtable where you can upgrade your weapons and summons) and this is a hell of an experience. I don't often give 10/10s and by doing so I in no way think this game is perfect, but I loved my entire time spent with this. Even if you have tried Dark Souls and bounced off it, this is a game like no other, simply amazing.

Posted by Daniel Simmonds at 12:23

Excellent review! I'm still very much at the start of the game and (as a massive Berserk fan) anything FromSoft create is always a must buy

Thank you for the kind words. I never got on with Dark Souls (though did love Bloodborne), but Elden Ring was just amazing. The Berserk references were the icing on the cake.