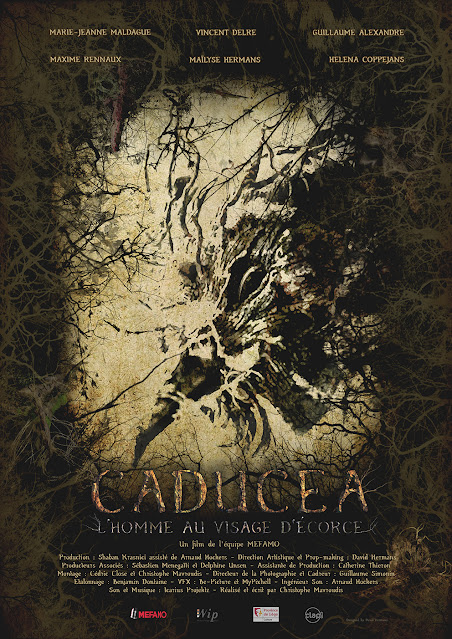 Caducea (also known as Caducea - The Man with the Bark Face) is an award winning French language short Gothic horror that was written and directed by Christophe Mavroudis, and which has recently headed to the Dark Matters YouTube channel. It was something different, certainly Gothic, and with a fairytale feel, this may not have been scary, but it was interesting.

The twenty five minute short is about Alain (Guillaume Alexandre), the son of rich countess Catherine (Marie-Jeanne Malague) who as a child had an adopted older brother in the form of the heavily disfigured Tom (Vincent Delré). While in constant pain, this brother amused himself by making intricate masks out of wood and bark. The short takes place both in the past and in the present, with it frequently switching back and forth, the past sections featuring different actors playing the main trio. One day, when Alain was a young man, his brother Tom decided to leave the safety of Catherine's mansion, heading out into the wider world. Now, some years later Tom has returned in order to reveal the dark secrets Catherine had been hiding from them both all their lives. 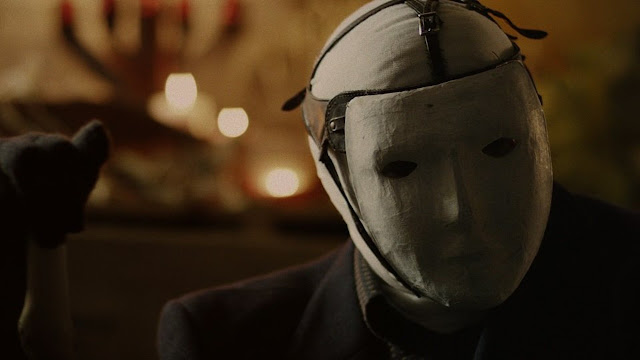 I liked how much the two stories went in and out of each other, sometimes even in the same scene. You have Alain in the woods at night in present day trying to find Tom, this then switches to daylight in the past and back again. This created a nice contrast between the far more monstrous present day Tom and his slightly less creepy, and more flamboyant past self. The short relies a lot on these flashbacks with probably around two thirds of the run time set in the past. I liked where the story went, if not so much the characters, I found the older version of Catherine in particular to be a bit weird as a character, just standing around not really doing much of anything, while the older version of Alain had some strange behaviour that wasn't explained that well.
The costume design for Tom were fantastic, the masks in particular where a highlight, and some of the lighting used really gave him the feel of a fairytale monster. The location of the mansion helped with the Gothic atmosphere.

I liked Caducea, it did something different and so was quite memorable. Me being me, as always I wished for deeper horror, but what was here was at least interesting, not bad at all. Caducea premiered February 25th on the Dark Matters YouTube channel, still my favourite channel there for quality short horror films.

Posted by Daniel Simmonds at 10:54