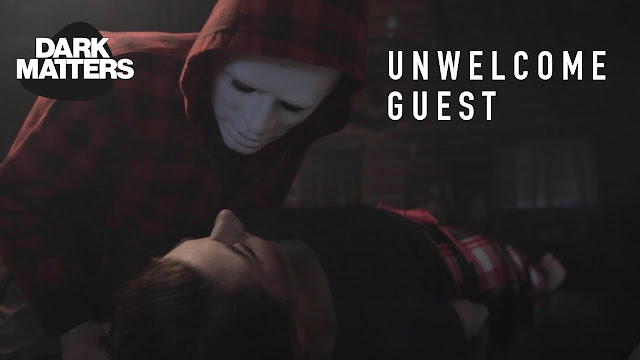 Today is a review of another horror film that can be found on Dark Matters' YouTube channel. If the title alone wasn't clue enough, Unwelcome Guest is a home invasion short, something that is established really early on with some apparent real life facts about this type of crime. Directed by John Sabatine (Brew House) and produced and written by Vincent Yanni, this bleak horror manages to break out a little from the formula I had come to expect.

Sheila (Wendy Wygant) is home alone in her remote home one evening listening to the radio, specifically a local news story is being spoken of about a notorious serial killer who has escaped from a local prison. She ends up turning off the radio, though maybe she should have paid more attention as it isn't long before she is disturbed by the sounds of breaking glass, and the arrival of a masked figure (Keri Jenzer)...

The short takes place over thirteen minutes and I thought it was well paced. The initial opening establishes the remote location and the character of Sheila until three minutes in when the horror begins. I liked that this was (with the exception of the radio report) completely dialogue free, both the attacker and the defender never say a single word. The desperation of the protagonist can be seen with Wygant's physical acting. The killer wasn't a hulking brute as you may expect, instead it was more of a lean looking person, that was all fine. Hardly the fault of the film, but the killer's red hoodie reminded me far too much of the lame antagonist from The Maze who was similarly attired and slimly built. The white expressionless mask they wore was functional, though I have seen that used in other horror films.

Onto the special effects and the pacing of the thing then. This was at times more violent than expected, though mostly this is indicated by sound effects rather than actually seeing the violence being done. That said there was one particularly nasty looking moment that made me wince, always a good sign when it comes to special effects. The constant back and forth battle between the two was well choreographed, and the short as a whole was split into various moments where things naturally fade to black, leaving a few seconds of darkness to then start it all up again (such as one early moment where Shiela turns off a light switch). Credit also goes to how this finishes, I've been trained over the years to expect some kind of lame jump scare ending, especially when it comes to short films, thankfully that isn't the case here.

Outside of the actual look of the killer I didn't have many complaints here. The camera work is good at building up paranoia and hidden threat, such as a few voyeuristic looking shots and a nice one taken from the floor next to a prone person, and there is a good flow to the story. Unwelcome Guest can be viewed on the Dark Matters' YouTube channel, where it premiered on 18th February.

Posted by Daniel Simmonds at 16:02