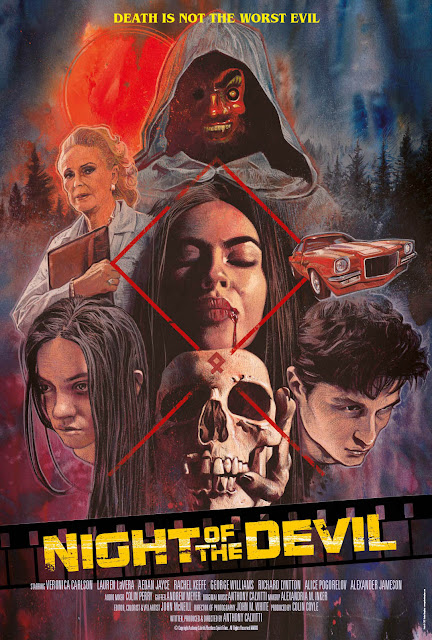 A second news post for this week, I'm determined to get up to date with my inbox so included here will be the surviving news from October of last year, everything else I've had to relegate to the email graveyard.

Horror-electro act, Cucurbitophobia (means a fear of pumpkins after having looked it up) released a haunted house themed full length album, Four Doors Of Your Deepest Fears. This is a concept album about a much feared haunted house attraction at an amusement park. The press releases states '...represents the experience, the journey, and the darkest thoughts of one individual who has made it through the house 'till the very end'. That resonates with me, I recall being in a harrowing one at an amusement park in Morecambe as a kid, there was one part where it puts you out onto a balcony and I recall wishing I didn't have to re-enter the place.

Horror-thriller Sanzaru had its digital debut in North American VOD platforms on November 16th last year. This comes from Freestyle Digital Media and is about a nurse who has been hired to care for an old lady who discovers a shocking secret. She starts to believe there may be an evil supernatural in the house. This was written and directed by Xia Magnus and stars Aina Dumlao, Justin Arnold, Jayne Taini and Jon Viktor Corpuz.
Night of the Devil is a short film from Anthony Calvitti based around Halloween. Set in 1978, four teens head into the woods and encounter the devil. The short includes Hammer Films actress Veronica Carlson and music from 1970s hard rock bands, Cactus and Iron Claw.
Posted by Daniel Simmonds at 13:45