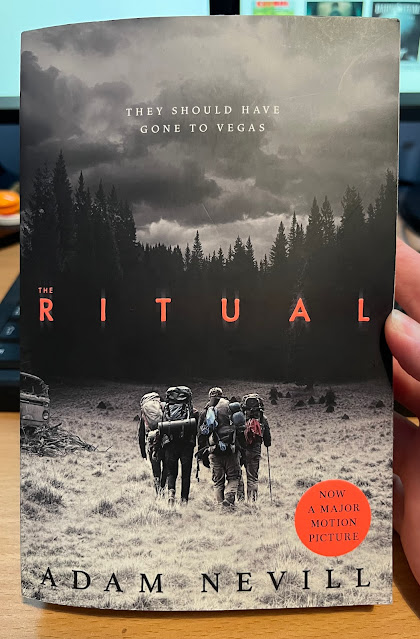 Back in 2017 I saw horror film The Ritual at the cinema and really quite enjoyed it. When I learnt that it had been based on a book I soon purchased a copy. While both book and film follow a similar path, it became clear the film decided upon a divergence at some point. The Ritual felt like two different novellas, with it nearly split straight down the middle with two distinctive styles. I have to say I enjoyed what Nevill did a lot more than what happened in the movie, while at the same time understanding why the film did what it did. If that movie had been a straight up adaptation then I imagine it would have worked well as a nasty little indie film, I say that in a good way. The second half of the book descends into misery and darkness with a low-fi feel. I will try and keep spoilers to a minimum, though I'm sure I won't be able to resist some comments on differences between the two mediums.

Luke, Hutch, Phil and Dom are old uni friends now in their late thirties, who in the process of growing up and becoming adults have drifted apart. They decide to go on holiday, both as a means to reconnect, and a means to get away from the trials and tribulations of their daily lives. They decide to go on a hiking trip to the Scandinavian wilderness, but it becomes clear that Phil and Dom are both ill suited to such a trip, Dom in particular managing to twist his ankle not long into their adventure. Fearing how long it will take the friends to reach their destination, Hutch decides to lead them into deep uncharted woodland, figuring it will be a shortcut. Unprepared for just how wild the wood was, the four soon find themselves hopelessly lost and getting increasingly desperate. Then it starts to become obvious that something or someone is silently stalking them, they must somehow find a way to put aside their differences and work together to survive, something not made easy with the divisions and resentments between the four only getting worse with each passing hour...

The first half of the book (titled 'Beneath The Remains') was familiar territory, the four friends in a way that reminded me of The Blair Witch Project, stumbling through very hostile forest. Before I really knew it I was hooked, the awful uncultivated woodland is almost as hostile as the unknowable presence stalking the friends. In terms of the characters this felt different to the movie. This was due to the film version of Luke having been caught up in an armed robbery, that character both suffering PTSD as well as survivor's guilt, as Luke hid, rather than come to the defence of his friend who ended up being murdered. This caused conflict within the group as some of them blame Luke's inaction as directly causing the death of their friend. The book version of Luke still remains the protagonist, but here he is far less of a good character, a man prone to violent outbursts and full of hate for what his life has become. The friends may have squabbled in the movie, but here, Dom and Phil especially appear to outright detest Luke. It was hard to root for the man initially, especially when early on he viciously assaults Dom.

By around the halfway point of the novel is where the third act of the movie began. A slight spoiler here, but one of my complaints of the film was that things went downhill with the introduction of a cult found living in a small village within the forest, it felt a bit uninventive. The book fares much better. Part II, titled 'South of Heaven' is almost completely new, the barebones plot structure is intact but everything that occurs felt a lot different. I can perhaps see why this was changed for the film, this second half is far more nasty, where before it was the friends versus the woods, this second part has the surviving characters confronting more human adversaries. I thought the choice of antagonists here was perfect, it led to an exciting second half where I just could not figure out how the protagonist was going to come out on top, especially as I misremembered how the film ended its own version of the story. The characters in this book are all flawed in their own ways, but this humanises them and makes them feel like more realistic people. The suffering that Luke in particular goes through was terrible. Where the third act of the film seemed to slow down the pace, here that pace is maintained due to the characters of Loki, Surtr and Fenris who were nightmarish.
Just like the film, the ancient creature hunting the friends is never described in great detail, even less so than the film in fact. Even when the creature is outright attacking the protagonists it is only described in partitioned detail. I remember a great bit where a character describes seeing an eye the size of an apple before realising it was actually a mouth full of teeth. A decent amount of chapters are presented as nightmares the characters are experiencing, these certainly add to the supernatural element, and aid in being ways the backstory of the location are provided to the reader.

Like a lot of good books do, The Ritual insidiously began to take more and more of my attention, it became a real page turner by the end of it. Coming off the film I knew what to expect, so the subverting of my expectations was thankfully a good thing as I thought the book told a much better story than the film managed. I loved the hateful claustrophobia that Nevill summons, and the daunting feeling of tragedy that was built up around the four friends. A great horror book that had me hooked.