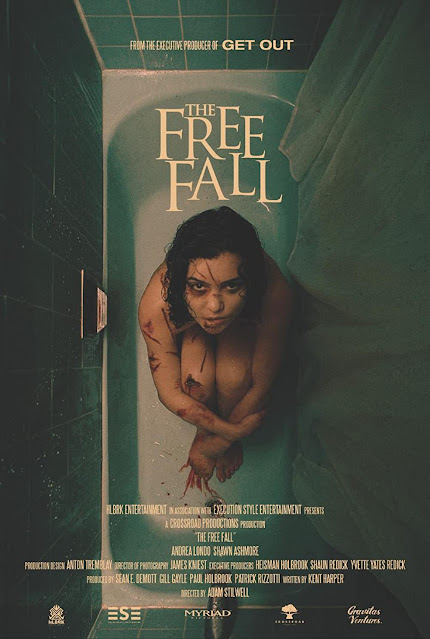 The Free Fall is going to be a hard horror film to talk about, this is because what I most enjoyed about it was the big third act twist. Directed by Adam Stilwell (The Triangle), and written by Kent Harper, this slow burn horror peaks early with a wonderfully twisted prologue, then dips with the following two acts becoming almost dull.

Sara (Andrea Londo - Narcos TV show) arrives at the home of her wealthy parents to witness a disturbing scene. Her mother, wearing a wedding dress, is in the process of stabbing her father to death, upon Sara's entrance to the room she then kills herself. The young woman then wakes up sometime later to find herself in bed and with no recent memory. Her husband, Nick (Shawn Ashmore - X-Men film series) informs her that she recently tried to kill herself by slitting her wrists, and that the trauma has led her to forget her past. While she doesn't remember Nick, she does feel a connection to him, and with his assistance she starts to try to get back to normal. However, Nick's strange intensity, the creepy maid Rose (Jane Badler - V TV series), hallucinations and horrific nightmares all culminate to make Sara feel that something really is not right. 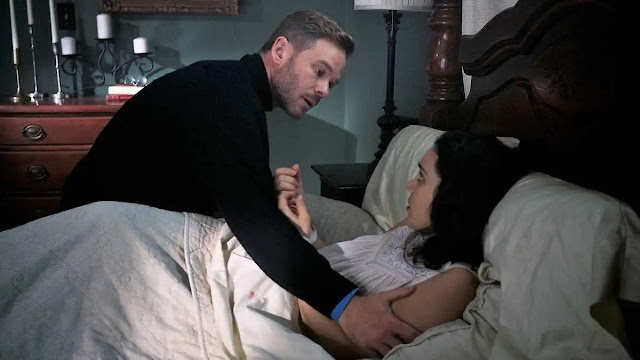 I loved the prologue, it was suitably messed up and made me really interested to see what direction the film would take. It was a shame then that the majority of the film was so slow burning, something that only makes sense having watched the entire movie. I think this would be one example of a film that would be more enjoyable on a second watch, as these first two acts are full of clues as to what is really going on. One thing The Free Fall does right is keeping you guessing. At first I figured Nick was a home invader who was pretending to be Sara's husband, but then the arrival of various different characters dispelled this as none of them seemed alarmed by his presence. Regardless, I didn't trust this character from the off, the way he looks at Sara and the way he speaks to her gave me a strong feeling that she was being gaslighted. That was really the only hook for most the film sadly, I liked the frequent nightmare/flashback scenes of a naked Sara with her wrists cut open crawling along the bathroom floor. The character of Sara herself was more a vessel for the viewer, as having no memories she didn't really exhibit much of a personality. I did enjoy most the supporting cast of characters, in particular Michael Berry Jr. (Pirates of the Caribbean: The Curse of the Black Pearl) who played the part of a mysterious, softly spoken stranger who keeps appearing at the house Sarah is recuperating at.

Everything comes together towards the end of the second act with a suitably demented dinner party scene that got more and more abstract as it went on. The visuals and the music really came together here, while the prologue makes a reappearance while being recontextualised. It leads into a third act that went exactly where the clues I had pieced together had made me hope it went. It may only be the last twenty or so minutes but the third act saved the movie, I loved this part, especially the epilogue.
The film as a whole has some bloody special effects that always looked fun, there is more blood than you might expect, heck, during one nightmare sequence Sara is literally bathing in a bathtub full of sticky looking red claret. Makeup effects also looked good, especially when it comes to healing injuries. As mentioned, the music was good, it seemed to gel more with the film as it went on, this one was one movie where I stuck around for the end credits purely due to enjoying the score. 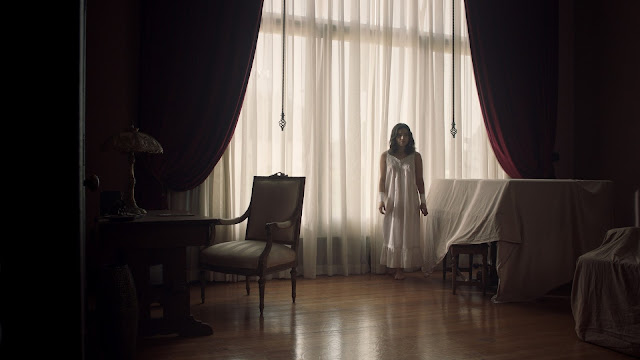 The Free Fall is worth a watch, while I did find a lot of it far too slow, it was the eye of the storm so to speak so made sense by the end. I do wish some of this had been more interesting, the relationship between Sara and Nick in particular seemed to not really evolve too much over the film's run time, I felt more could have been done there, especially as it is the meat of the movie. The Free Fall is due to be released by High Fliers Films on 15th August later this year.