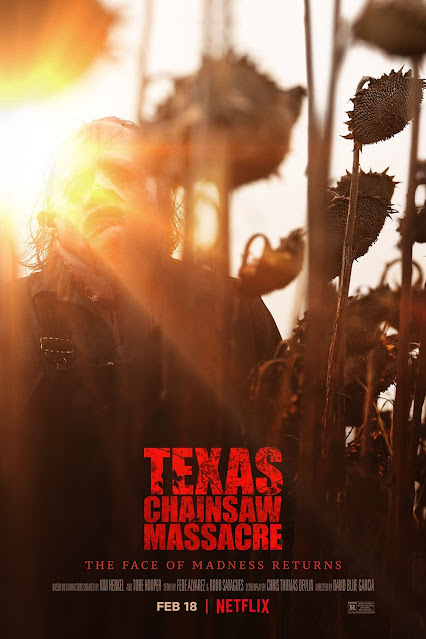 A month or so back there was a bit of buzz around the latest entry in the messy The Texas Chain Saw Massacre series. This sequel, Texas Chainsaw Massacre (not to be confused with the original, the remake; The Texas Chainsaw Massacre, or indeed Texas Chainsaw 3D)  directed by David Blue Garcia (Tejano) was picked up by Netflix after some misfortunes, including very negative test screenings. I try not to review films based on a single criteria, I say that as while this may not be a good sequel and it may not be an intelligent piece with anything to say, it is some dumb entertainment that reminded me of horror films from the early 2000s, which hit the spot for some lazy Sunday morning viewing.
This sets itself up as a direct sequel to the original 1974 classic. It states that after Sally, the sole survivor escaped the deadly cannibal family, no trace of Leatherface could be found. Now in modern day and that crime has turned into local legend. A group of young influencers enter the area, with aspirations to turn a Texan ghost town into a commune for like minded positive influencers. However, it turns out one of the properties isn't as abandoned as imagined, the occupant, an elderly woman and her hulking ward (of course Leatherface, here played by Mark Burnham) are turfed out by the local police, an event that causes the woman to suffer a heart attack. On route to hospital the lady dies, and Leatherface in his sorrow lashes out at the officers, causing the police wagon to crash, and freeing the madman to begin his trek back to the ghost town to get revenge on those he deemed responsible. 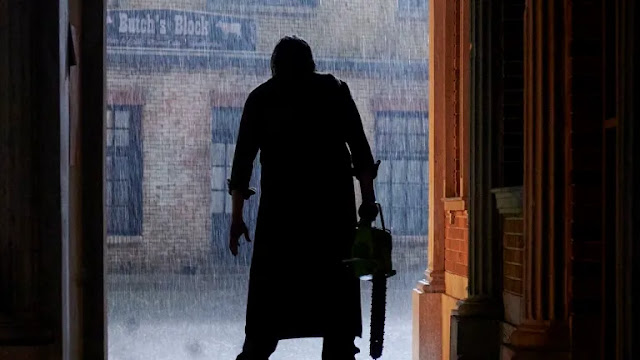 The film begins by introducing the cast of young adults, but it is only really two of them who play much of a role in the movie. Near enough the rest of the cast exist just as fodder for Leatherface to slice his way through. Sisters, Melody (Sarah Yarkin - Happy Death Day 2U) and Lila (Elsie Fisher - The Addams Family) are the dual protagonists which at least felt vaguely different. The characters were fine, Lila is the survivor of a high school shooting so she has emotional baggage to deal with. Another key character is Sally, the survivor of the original film. It felt like this subplot of the film was trying to do the same as the 2018 Halloween sequel, heck, at a similar age to Laurie, and with her long white hair, and having lived her life in preparation for confronting her biggest fear she seemed almost a twin of that character. Sadly the original actress passed away in 2014, so Olwen Fouéré (Mandy) takes on the role. To be fair she doesn't really get to do too much so I can't fault her, I just wish this character had been used more however. As for Leatherface himself, he is hulking and violent and effective at being an imposing force, plus he gets to do his iconic chainsaw dance at one point.
You can't fault this horror for not doing what it says on the tin. The original movie had a bit of a misleading title as there wasn't much chainsaw action really going on. I've only seen it the once but I remember it being far more of a psychological ordeal for the poor protagonist than a bloodfest. Here there is quite a large body count, the majority succumbing to the chainsaw, but this all occurring in one particular scene. I enjoyed the special effects, there is lots and lots of blood, and much dismemberment. It's a shame it happens mainly to characters who had zero development and who mainly didn't even get any dialogue. Special mention goes to the dopey bus driver whose actions are made baffling by the fact I don't recall him ever speaking, so he appeared like he was in his own chilled out little world seperate to the film. 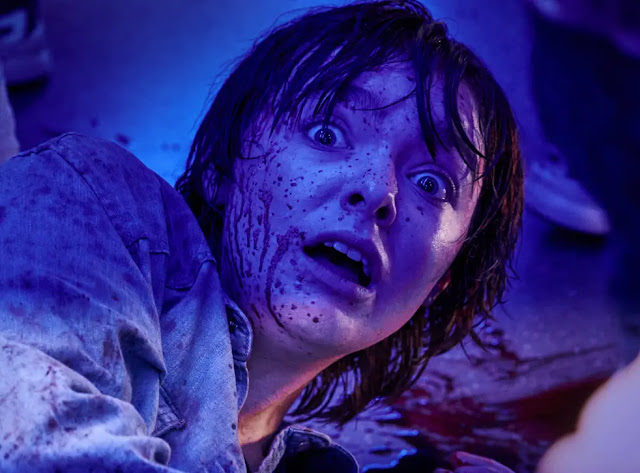 As a sequel this is an insult to the style of the original. That isn't anything new though, nothing, except perhaps the fun second film which kind of  matched the style of that one. For me, this brought to mind early 2000s horror films, ones where characters exist merely to get killed off, and where there isn't really a message to speak of. All the social influencer stuff here is minimal, and almost pointless, aside from to make a little joke where people would rather live stream what is happening rather than exist in the moment. By the end characters were acting very unrealistic, doing one liners and making jokes, rather than be a complete mess like the protagonist of the first movie was. Still, I have to say I did enjoy the very end of the film, was satisfying. I also thought the sound design was nice, plus the film itself didn't look half bad, some of the locations used were well chosen, such as a field of dying sunflowers that echoed the colour vibe of the original movie.
I think if you are heading in to Texas Chainsaw Massacre expecting a film that treats its source material with care and attention then it won't really be for you. If you are after something dumb and yet still entertaining then this may be worth a watch. It was a nice bit of escapism for a lonely Sunday morning. Texas Chainsaw Massacre can be viewed on Netflix.
SCORE: