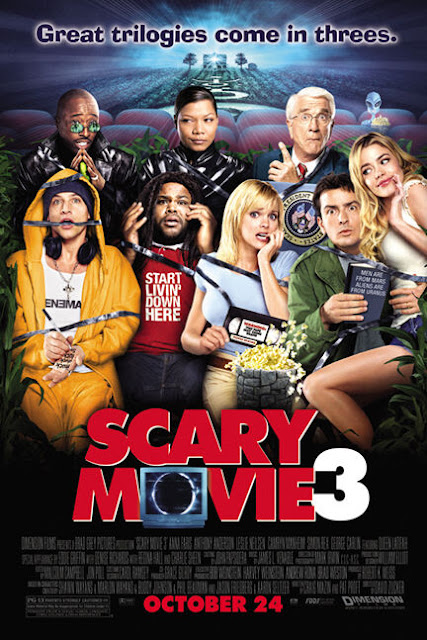 I had to work at my day job this morning (being a Saturday as I write) and so I wanted something easy to watch for review as I was feeling a bit tired. After flicking through my dauntingly large Netflix queue I noticed that the horror parody movie Scary Movie 3 was due to be leaving the streaming platform at the end of March so figured I would give it a watch. As a teenager I saw both Scary Movie and Scary Movie 2 at the cinema. Then, like now, the sex and gross jokes didn't appeal to me, but I did like how they parodied popular horror films. It all started as a joke version of Scream, while I recall the second film was to do with a haunted house. Having now seen the third film, it feels a product of its time, many of the jokes aren't that great, but it weirdly did a decent job plot wise of combining two different films.

Cindy (Anna Faris reprising her role from the first two films) works as a journalist, and sick of the same old stories her station runs she takes interest in news of the appearance of a strange crop circle at the home of Tom (Charlie Sheen - Two and a Half Men TV show) and his wannabe rapper brother George (Simon Rex - Scary Movie 4). Elsewhere, there is a creepy VHS tape that local legend says kills whoever watches it seven days after they do so. After Cindy and her nephew Cody (Drew Mikuska - Scary Movie 4) end up watching the tape she finds herself in a race against time to break the curse, and discovers it has something to do with the possible arrival of aliens. 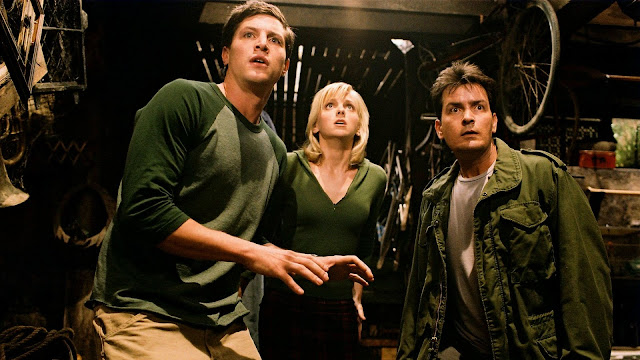 So from the synopsis it is clear the main two films parodied here are The Ring and Signs. I admit I did actually appreciate how these two films were merged. I also liked how the film replicates some of the cool effects from The Ring, such as a scene where a creepy girl crawls out of the TV, and a scene where a fly on the TV screen becomes real. Other films referenced were not horrors but there had been a precedent for this series not only taking inspiration from horror films. Most notably, you have a brief 8 Mile subplot at the film's start which doesn't really go anywhere, it did however introduce the characters of Mahalik (Anthony Anderson - Transformers) and CJ (Kevin Hart - Jumanji: Welcome to the Jungle). There are also plenty of ill fitting The Matrix: Reloaded scenes, this makes sense as the film would have been out roughly around the same point.
On the subject of actors, I was surprised to see so many big names here, I had figured by this point the series was direct to video but apparently not. Other notable names included in the cast are Pamela Anderson (Barb Wire), Denise Richards (Starship Troopers), Queen Latifah, Leslie Nielsen (The Naked Gun series), George Carlin (Bill & Ted's Excellent Adventure), even Simon Cowell has a guest appearance.

Much of the humour hasn't aged well, this is definitely a film of its time filled as it is with jokes that don't land as well as they may have, while nearly all the female characters are sexulised in one way or another. Personally I enjoyed the physical comedy moments, such as the (excellently cast) Cody constantly accidentally attacked, and one scene set at a wake in which George mistakes a body in an open casket as being alive, causing complete chaos as he attempts to bring the body back to life. This physical comedy works as characters never suffer any lasting effects. As interesting as the story may have been in places, with so much of the humour not really seeming very amusing the film didn't feel that exciting, and was even a little dull in places. 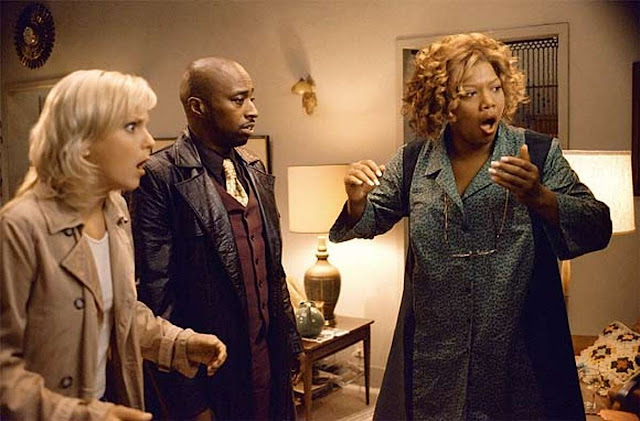 Scary Movie 3 wasn't the disaster I figured it would turn out to be, but it also didn't set my world on fire. I appreciated the parodying of the horror films, and the dated references I didn't mind at all, but the film just wasn't that exciting or entertaining to watch. This can currently be viewed on Netflix (at least in the UK) until the end of March.

Posted by Daniel Simmonds at 04:34