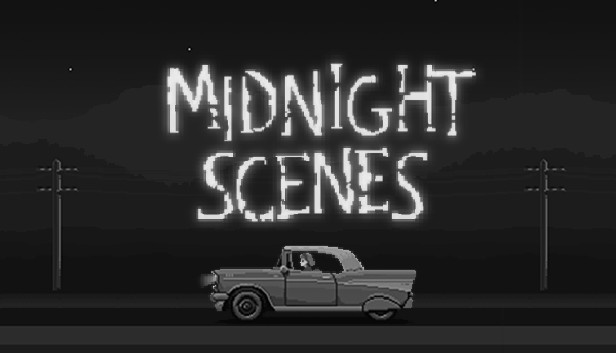 I recently purchased a bundle of games on Itcho for a good cause. I was having a look through them looking for something to try out and Octavi Navarro's Midnight Scenes Ep.1: The Highway stood out. This micro-game was obviously heavily inspired by The Twilight Zone, and with its attractive, yet creepy pixel art style I was interested.

The game begins with a Twilight Zone introduction to our protagonist, a woman named Claire who is travelling in her car late one night, having gotten delayed due to a flat tyre. She is out in the middle of nowhere when she finds a telegraph pole has fallen down across the road. There is an emergency phone not too far past it, but first she has to find a way to stop the power to the wires on the pole. This diversion sends her into a place of terror that plays out... in the Midnight Scenes. 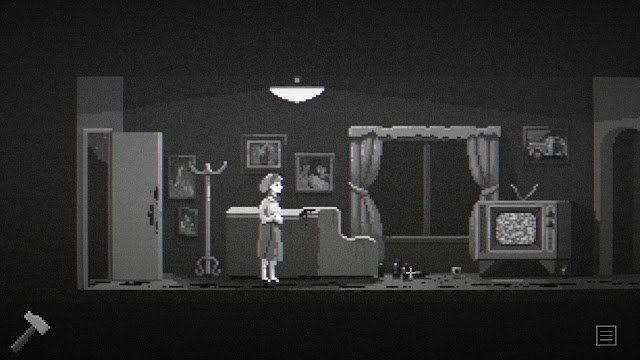 So being a micro game the whole experience was over in roughly ten minutes. You control Claire via clicking on objects in the environments to get her to move over and interact with them, and there is a slight point and click style puzzle element needed for her to succeed. The game is in black and white and despite the pixel look this was a bit creepy. First off is the wonderful music that plays which builds up atmosphere, then there is world building going on, with first the discovery of what appears to be 'missing' posters for a young boy, and then the discovery of a crashed truck covered in blood. As the game plays out the horror gets stronger, and there were some cool moments that occured, such as walking into a bathroom and appearing to see a dead body for a split second before the bathroom light goes out. By the end of the game a story had been told, near entirely just by piecing together clues you encounter in the four or five screens. It then all ends on a prologue told via text.

As the 'Ep.1' part would indicate, this is the first in a planned series of bite size horror stories, and going from this I'm all for more of them. It seems there are a lot least two more so far (The Goodbye Note and The Nanny) It was impressive how such a vibe of The Twilight Zone was created from what is pretty simple. I enjoyed my brief time with this, certainly worth ten minutes of anyone's time.