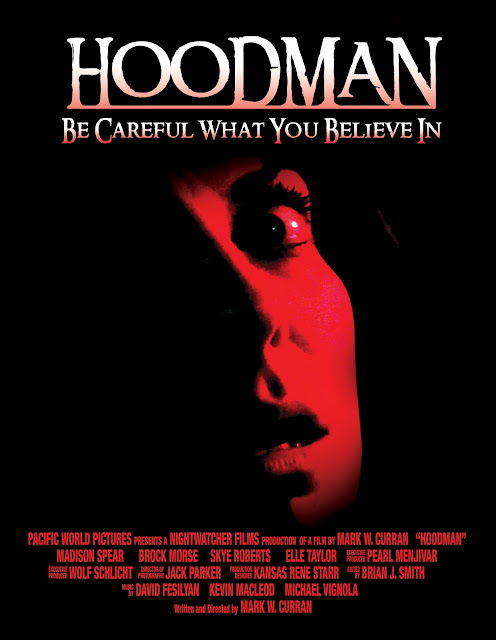 Hoodman is described in its press release as 'ultra-low budget', if that is the case then it certainly looks the part in terms of film quality. Written and directed by Mark W. Curran (Abandoned Dead), this middle of the road American paranormal horror doesn't take any chances, with a format that felt familiar, and an antagonist who felt like a copy of the villian from the dull The Bye Bye Man.

Ariana (Madison Spear - A Deal With The Devil) is driving late one night when she is distracted by her six month year old daughter, causing her to take her eyes off the road. When she looks back she is shocked to see a hooded figure standing in the middle of the road, and so she swerves to avoid him. Waking up in hospital she is told that sadly her daughter didn't survive the crash, but in denial about this being possible, Ariana instead convinces herself that a local urban legend about a hooded child stealing spirit is actually real, and so sets out to try and find a way to bring her child back from it. 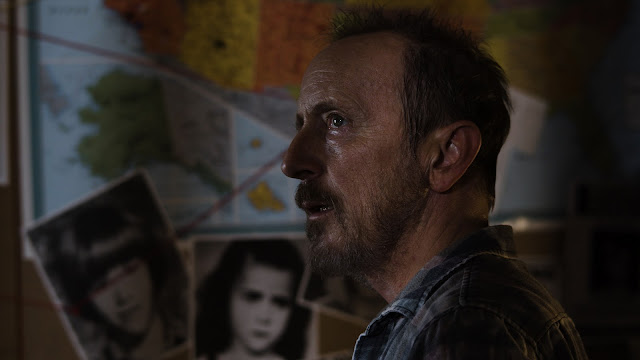 I guess you can say Ariana is different to a traditional protagonist as she inserts herself into the paranormal events. If she had accepted the news of her child's death than maybe what little did occur wouldn't have done so. Unluckily for her she gets the attention of the Hoodman who is all too real. He only targets those who believe in it, and not being able to face the truth, that makes Ariana one such person. This follows the very traditional route of American paranormal horrors at times seeming like it is crossing off a checklist. You have sudden sightings of the hooded spirit who has then vanished upon a second glance, the protagonist suffers nightmares, she meets a previous victim of the antagonist force, and she finds time to have a little 'research' montage in the middle of the movie. It leads up to a finale that was as sadly underwhelming as it was sudden. That part in particular really drew The Bye Bye Man comparisons with me.

At nearly a hundred minutes long this took a while to get going, by the time an hour had passed I think the Hoodman had only made three or four blink and you miss it appearances. It features more later on in the movie, leading up to me thinking maybe it was a crazed Scream type killer instead when it appeared to be quite physically there rather than ghostly. The horror is always slight, there is not much peril, a small body count, and plenty of false jumpscares, such as when a cat screeches at Ariana. For me, I wish there had been a more detailed look into the origins of Hoodman, the research section only really goes to explain how many different children had been going missing in the area for decades, something that the decent intro credit sequence made up of various newspaper headlines, as well as the character of Frank Hackman (Jack James - Killing Floor: Incursion voice work) had already established. Side characters are not too many, a standout one was Joe Finfera (Cholo Zombies) who played the investigating detective who really was a bit of a jerk. 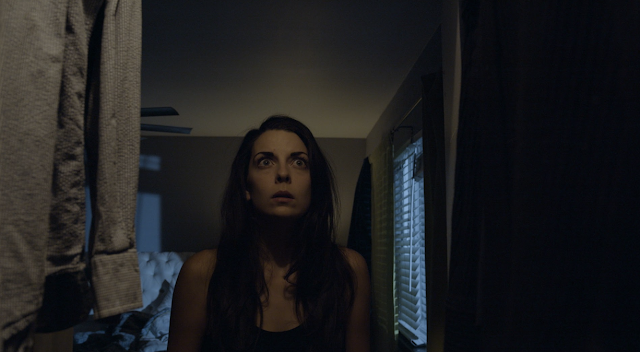 I wanted to like Hoodman, I was immediately impressed by the camera quality when I knew it to be a low budget indie film, but the lack of originality led to me wishing it had done something more to stand out, rather than feel like a stereotypical entry in the crowded genre. Hoodman can be viewed on Amazon Prime Video.