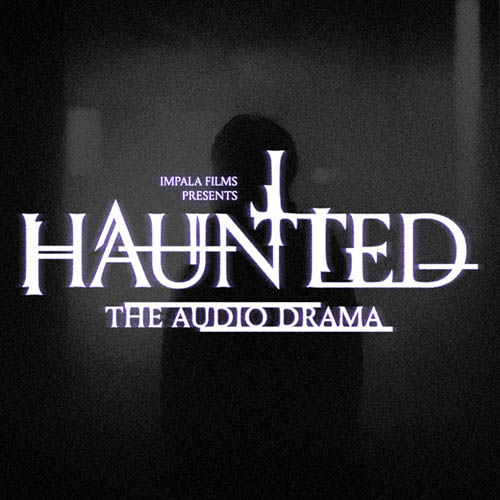 A few weeks back I mentioned Haunted: The Audio Drama and now it has released. I'm thankful that the first release for this serialised horror story had two parts put out, rather than the one I expected. Originally envisioned as a traditional TV show this was changed into what it is now both due to budget constraints, and due to the creators discovering audio dramas as a result of the changing world during the height of the Covid pandemic. This review will be of the first two episodes, my experience of it so far so to speak.

The Signal is the title for the first six parts of this, I imagine there will be various different title headings further down the line (it seems there will be eight stories split across thirty two episodes). Part 1 is roughly a half hour long, entirely the length I expected, a decent length. So, the first episode then. This sets up the protagonists as well as begins the story, obviously as it would be strange if it didn't! Abigail Corbin (voiced by Isabella Barbieri) is a young woman who is obsessed with the paranormal, even hosting her own podcast on the subject. When she catches wind of a strange occurrence in her small hometown she seeks out her idol, the ex-paranormal investigator James Hunter (voiced by Jamie Evans who also helped create this). James is not the man he once was, an alcoholic and jaded with the world, but nonetheless he is intrigued by what Abigail tells him, and perhaps seeing in her the passion he once had.

The first episode sets up breadcrumbs for the rest of the story to follow and centres on a teenage boy who killed his parents and then himself in mysterious circumstances. While Abigail and James are the main characters the story doesn't always stick with them, the prologue for instance is set in the troubled boy's home. Most of this has characters conversing with each other, but sometimes with James you get a monologue where he provides his hidden thoughts. Abigail gets a similar thing with her narrations into a dictaphone she carries. It all leads up to a cliffhanger ending, which leads nicely into part 2.

Part 2 leaves the preamble and gets right into the story with our protagonists in the middle of an unfolding situation. Including grisly details of death, mutilation, as well as an illegal autopsy this second part was full of excitement and action, leading up to a great little cliffhanger. Whatever is going on with the mysterious radio signal that drives people mad I don't know, but I am a little hooked.

I expected I would enjoy Haunted: The Audio Drama and going by these first two episodes that is certainly the case. It is well paced, has mostly good voice acting and is an interesting story. This can be found on Spotify, iTunes, and Audible and is well worth a listen, especially as it is free.

I’m Now on the second chapter, loved the Signal, now Soft Cry takes us in a different direction, nice cliff hangers, even signed up to Patreon to get the next part, I listen to it in the car and wanted to find out what happened to Abigail at the end of one part.
I listen to a lot of books on tape and audio plays and this rates up there with them all.

Yeah, I've kept up to date with this and am enjoying it. I'm glad that Soft Cry is shaping up to be just as enjoyable as The Signal.