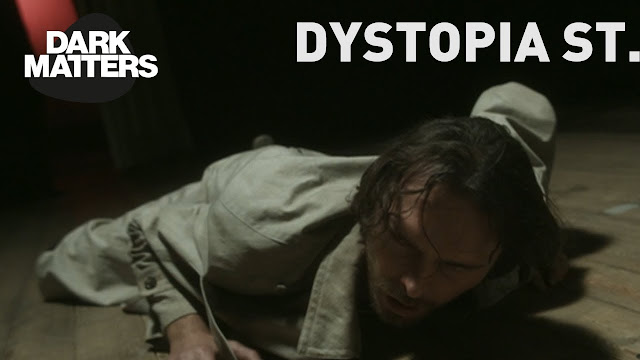 Dystopia St. is a short ten minute film written and directed by David Cave (Girl and a Scar), and it has recently been added to the Dark Matters Youtube channel. It is described as having a David Lynch vibe to it, and I can't disagree as it certainly channels that master.

A man (Danny Shayler - The Banishing) awakens naked in an apartment to the sound of a phone ringing. A mysterious voice tells him "To find the answer, keep hold of the key". This begins a surreal and trippy nightmare in which the man searches for, and then attempts to hold onto a key. 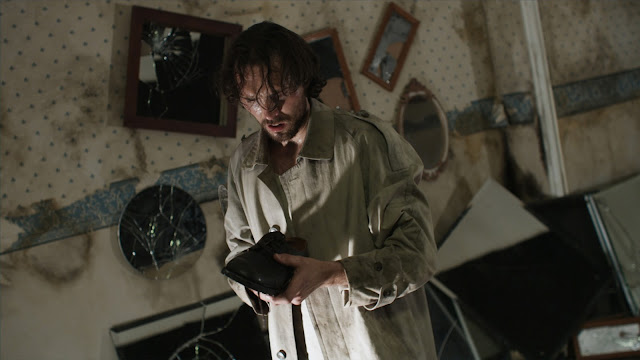 The whole short appears to take place within an arthouse style Hell realm where nothing is as it seems. Objects disappear and change form, while a bald man with stitched up eyes taunts him. This includes one segment where the man is destroying a VHS tape that is playing on a TV regardless, and one part where he is holding a female's breast only for it to be revealed to belong to a large boned man instead, as well as various moments where an object turns into maggots. I did wonder where exactly this was heading as I couldn't quite grasp the point of it all. Where it does end was a satisfying way to finish the short, but I was still left unsure of what if any message Dystopia St. was trying to tell. In terms of the filmmaking I did appreciate the set dressing, and the way scene changes were handled was cool.

If you like your films weird and surreal with an arthouse vibe then this will be right up your (Dystopia) St. It had some neat moments to it but was maybe a little bit too obscure for me in terms of what was happening. Check it out for yourself on the Dark Matters channel.