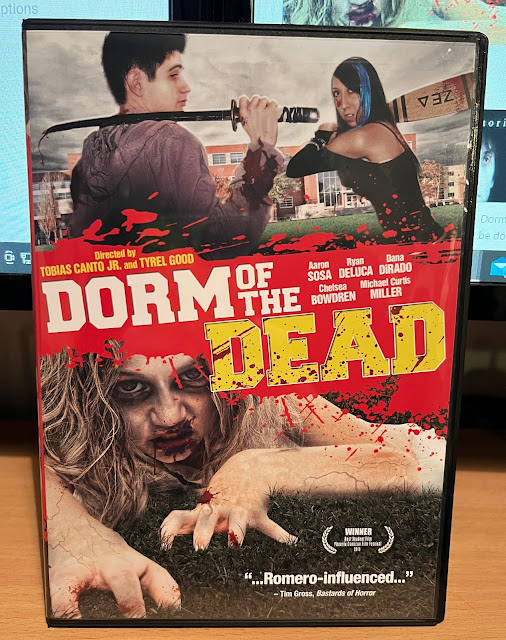 There is something about trashy low budget zombie films that no other genre of horror film can match. In the zombie world quantity is always better than quality, and here you have some pretty terrible looking makeup. The Tobias Canto Jr. (Knock Knock) and Tyrel Good directed Dorm of the Dead takes place in a fitting location, as the extreme low budget here had me thinking that this could have genuinely been shot on location at the cast and crews actual college campus.

You will have to excuse me as I didn't catch many of the characters names. Basically, Cory (Ryan DeLuca) arrives at the college campus of his elder brother as their parents had gone away on holiday. His arrival unfortunately coincides with an undead outbreak, and soon Cory and a bunch of other students find themselves having to team up to survive. After seeing a broadcast from the college TV station, the group decide they must make their way across campus and use the station to broadcast a message for help to the outside world. 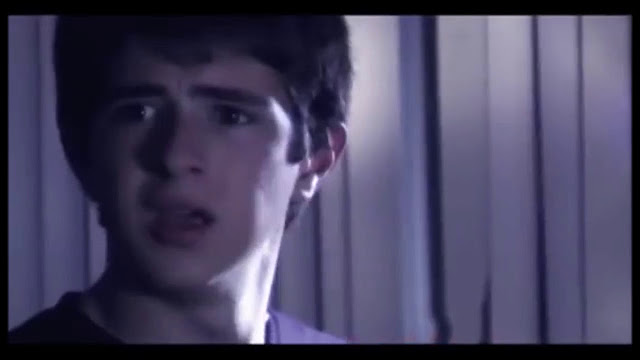 Dorm of the Dead is a terrible film, but thankfully when it comes to the zombie genre that doesn't mean a death knell. I was a bit hesitant seeing just how indie this was as it isn't a rare occurrence for young indie directors to get carried away and make huge overblown and fatally boring movies. Here though, this fits in at around ninety minutes so doesn't really outstay its welcome. The cast of characters vary in their acting ability but as they all play various stereotypes this doesn't become too much of an issue. Each of the group match a different type of student, so you have the rich girl, the sporty girl, the geek, the goth, the jock as well as a few others. Much of the plot has them running around the campus on random fetch quests that just seemed to exist to move the characters around. Early on for instance they all head to the library where the rich girl said her father was going to be to pick them up, then later they head to the studio to rescue someone's boyfriend to not much success. These plot points were very basic and I do wish there had been more of a coherent story. As it is, that doesn't really come until the films third act when an actual semblance of a plot comes to fruition.

The characters are generic but some of them were still entertaining to watch, I though the weird political science guy was decent even if he falls into the same trap everyone else does. It seems like the script writers felt that there needed to be constant conflict, so the group are constantly taking it in turns to argue with each other. It leads to a strange recurring thing where characters leave one scene fine and then enter the next scene all arguing again, conflict for the sake of conflict. It leads to some needlessly overblown moments such as near the start where the jock and the protagonist make the group pick sides for who they are going to go off with, when in the end it doesn't really make much difference.

The special effects range from bad to awful, the worst culprits being the use of CG in some scenes. Some of the zombies have CG effects on their eyeballs to make them look milky, but this is only used occasionally so stood out for the wrong reasons. Then there is an early battle where very obvious digital blood spurts are used. This is made all the more bizarre when most the film uses actual fake blood and looks all the better for it. The undead have white makeup and with black used for around the eyes. It looks very artificial and doesn't look realistic, but it was consistent so I didn't really care. There are plenty of zombies even if they are mainly used to wail on doors in the background rather than be an actual threat. There was one terrible scene that had the undead hanging out listening to music, the two bikini clad zombies in particular where the film's lowest point. Countering this though, the highlight of the film comes on the football field, when the zombified remains of the college's American Football team emerge slow running out the darkness of the night. That was an actually cool part of the film.
I will also say I liked the soundtrack, all too often God awful generic American rock music is used in these films, but the music here wasn't that, the almost jaunty tunes that play added a tiny bit of urgency to the scenes. It all comes to an end with an optimistic after credits zinger that promises another film to follow, but ten years later there is no sign of that so I'm not holding out hope.

Is Dorm of the Dead a good film? Of course not, there isn't enough going on, the film and sound quality is poor and the acting isn't great. On the plus side though it wasn't all a complete waste. I'm not going to ever watch this again, but I had a fine enough time watching it, there are certainly far worse zombie films out there.

Posted by Daniel Simmonds at 11:40