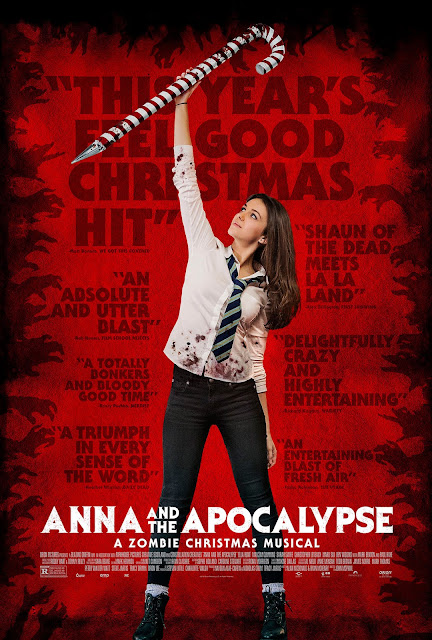 Anna and the Apocalypse is a film I have been aware of for quite some time, I even almost saw it at the very last UK Festival of Zombie Culture (R.I.P) as it was one of the multiple choices the audience could vote to see. As it happened it didn't win the vote, and the event organiser commented that we were not really missing out on much. With a screener I had planned to watch not working I was free to choose my own film to watch, and seeing this on Shudder I thought it was about time to give it a try. Directed by John McPhail, the hook with this comedy zombie horror is that it is a musical, and were it not for that unique hook this really wouldn't have stood out.

It is the festive season in the small British town of Little Haven and unknown to all, in the background a zombie outbreak is brewing. Anna (Ella Hunt - Cold Feet TV series) has recently broken the news to her dad (Mark Benton - Catterick TV series), the school janitor, that she plans to go travelling once she leaves school the next year, something that her best friend John (Malcolm Cumming) has supported her with. That night, during the performance of the school Christmas show, the zombie outbreak happens. At the behest of the tyrannical head teacher, Arthur Savage (Paul Raye), the performers and the audience are convinced to holdout at the school, awaiting rescue by the army. The next day, Anna and John meet, oblivious to the chaos unfolding all around them. Eventually they do notice, and it isn't long before they have teamed up with a few other school friends. These include American transfer student Steph (Sarah Swire), shy Chris (Christopher Leveaux), and Nick (Ben Wiggins - The Witcher) , the leader of the school jocks. Their plan is to battle their way across town in order to get to the school where they hope to meet up with their missing family and friends, due to the place being designated as an evacuation point. 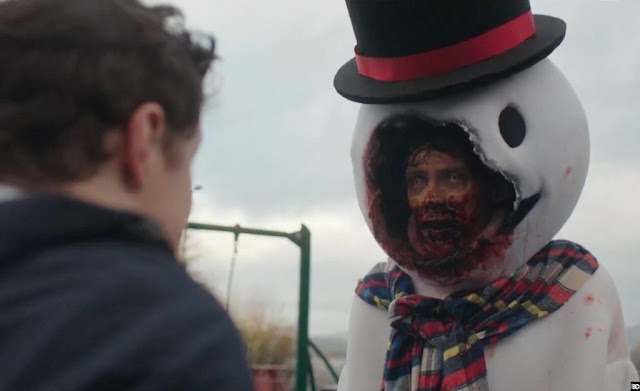 I wasn't sure what to expect from the songs and it was with a little trepidation that I awaited the first one to begin. While I haven't seen it, I imagine the songs are maybe like something from High School Musical. Characters sing and dance around whatever location they happen to be in, full of sometimes embarrassing to watch choreography and exaggerated scripted movements. Some songs work better than others and unsurprisingly it is the ones that incorporate the undead that I enjoyed more. Anna sings a positive and uplifting song about new beginnings as she obliviously dances through chaotic scenes of zombies attacking survivors, which felt very similar to how Shaun doesn't notice the same thing in the classic Shaun of the Dead. Later on, when the character of Nick is introduced he gets his own action packed song about how much he and his friends are enjoying the new zombie filled world. Then you have the primary antagonist, the ever more twisted Savage who groans and gripes his way through a couple of bitter tunes about how he needs to rule the survivors. All of these never felt too off, but there were not really any that I felt were worthy of a second listen.

The other side of Anna and the Apocalypse is the more traditional zombie film. In this respect there was not many surprises at all. Going back to Shaun, this felt similar, that of characters heading to a certain location, their numbers dwindling along the way. I guess in some ways the deaths here felt more sad due to the youth of the cast, I admit more people died than I expected. There are a decent amount of zombies, they don't look bad, and they are of the slow shuffling kind. You get the obligatory scene of someone having getting swarmed and having their insides pulled out, and for a musical there is much more blood than I thought there would be. The story was definitely one of the weaker sides of the film though as it was all so cliché in terms of zombie films, all the way up to the sudden rescue when all looks darkest. The Christmas element mainly comes down to set dressing, a zombie Santa and Elves appear at one point, while Anna's primary weapon of choice is a large metal candy cane stick. Some inventive deaths here, such as a zombie whose head gets crushed by two bowling balls being smacked either side of it. 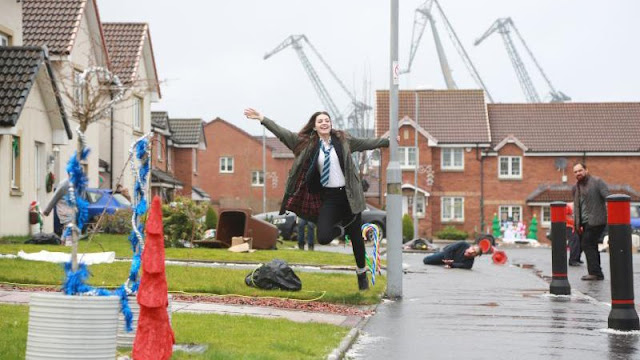 Anna and the Apocalypse wasn't bad, having seen so many films in this genre the story did feel a little underwhelming and afraid to take many risks, but the music angle did soften that part a little bit. Either part of this on its own wouldn't have succeeded, but the two parts kind of prop each other up to make this not bad. While I can't see this being anyone's favourite zombie film it was still watchable and had a couple of funny moments even if it was never laugh out loud. Just be aware of some of the more cringe inducing musical numbers.