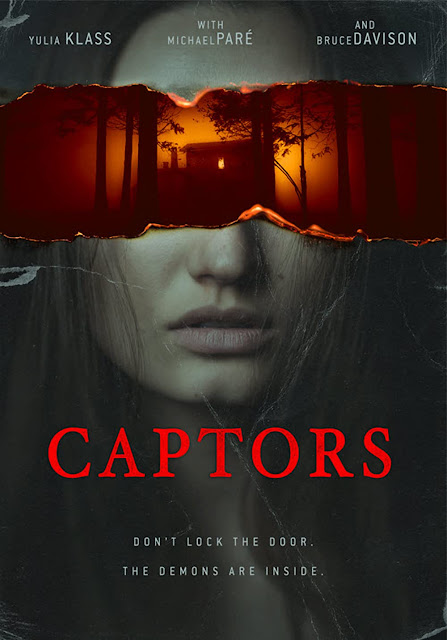 Alone, also known as Captors, is an American thriller that features just the one actor for the vast majority of the ninety five minute run time. Directed by James Cullen Bressack (Pernicious) and written by Philip Daay (Fear the Invisible Man), this suffers from a deficit of interesting characters and a plot that just felt like it was going around and around in circles.

Alys (Yulia Klass - Death Rider in the House of Vampires) is a troubled woman who suffers from a variety of mental health issues, not least extreme PTSD. This is due to spending time when she was younger as a captive of a depraved serial killer and rapist (Bruce Davison - X-Men), before one day managing to escape from her imprisonment in circumstances she can no longer remember. Living in poverty, and unable to function in the world due to her troubles, she thinks her problems are solved when a distant relative dies and leaves her his house in his will. She is dropped off at the property, which is deep in the wilderness, but soon makes an alarming discovery. The person who left her the house wasn't a distant relative at all, but the very same man who kept her imprisoned for all those years. Unable to leave due to the remote location, and with the food supplies all laced with LSD and full of pins and razorblades(!), Alys instead has to confront her past, exploring the house to find out more about her repressed memories, while aware that she might not be as alone as it may appear. 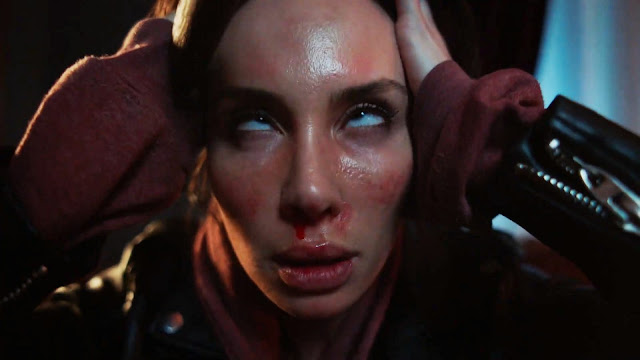 In a different direction Alone could have been an interesting film. It falls down at the first hurdle with an antagonist who just wasn't that captivating. I kept thinking back to Saw and how interesting the mastermind, John Kramer was. Here, this killer tries to be as cerebral but he didn't have much personality to him. It was an interesting idea that he had essentially tricked Alys into entering his psychological torture chamber from beyond the grave, yet I didn't rate him at all. It is always difficult to balance a film where it is just the one character for so much of the time, and with Alys my interest wasn't captured. It didn't help that every single character here was so unlikeable, even the woman's therapist who is viewed as an almost angelic figure, comes across as miserable and uncaring. The world is such a bleak place that at some point I almost thought this was some type of Hell dimension and Alys was already dead.

Much of the horror, outside of the obvious, comes from Alys' tortured mind. Even in the prologue when she is in the city, she frequently hallucinates her captor. These hallucinations get stronger as the film progresses, possibly helped by the LSD she is accidentally consuming, chief of her visions is a zombie like young woman who mostly pulls faces at the camera. I will say some of the special effects were not half bad, especially liked this creepy painting whose eyes moved about. Apart from this the film isn't too exciting. There were no real revelations during the protagonists explorations of the house, she seemed to be in a holding pattern, getting frightened by various things both real and imagined, while also getting increasingly paranoid. The usual manic types of editing are used to simulate her periods of madness, all as you would expect. While the plot does eventually go places, it felt a little abrupt for me, and not that satisfactory.

I had a feeling I wasn't really going to get on with Alone. You would think a movie about a character stuck on their own in the one location would appeal, as that is what I have to endure for three days of every week thanks to zero social life, but no, this didn't appeal. That was mainly down to the unlikable characters, the weirdness of some of the visions, as well as the epilogue of real life facts that seemed designed to somehow elevate this film a little bit. Alone is due for release by High Fliers Films on 22nd August later this year.

Posted by Daniel Simmonds at 16:42