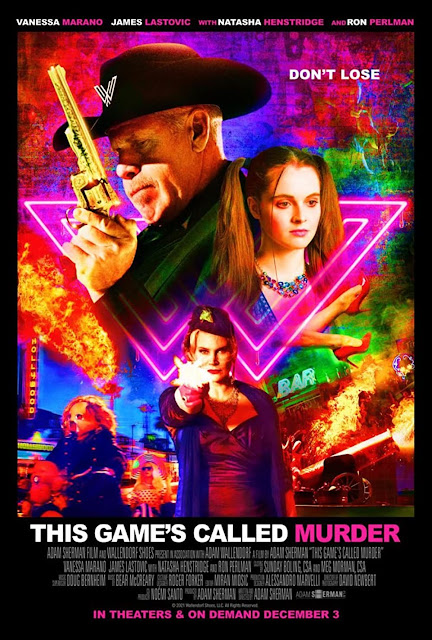 I was in two minds whether to watch the Adam Sherman (Dead Doll) written and directed comedy crime film This Game's Called Murder. I decided to in the end as it featured some notable names, plus I liked the psychedelic colours of the poster. Often I find myself on the side of style over substance, but not so much here, thanks mainly to the cast of very unlikeable characters that made it hard for me to care about any of them.

Jennifer (Vanessa Marano - Dexter TV series) is the privileged daughter of a world famous shoe designer, Mr. Wallendorf (Ron Perlman - Hellboy) and his wife (Natasha Henstridge - The Unhealer, Species). In a rebellious phase she has started dating bad boy Cane (James Lastovic) who lives in an underground commune of criminals. Her family are murderous and evil, while her new found friends are also just as murderous. Not really fitting in either place, revelations make her start to look for a way out. 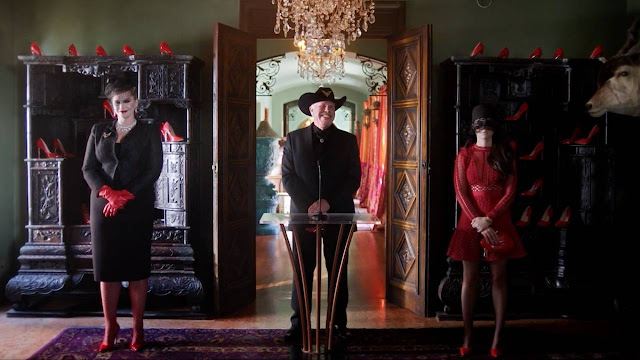 If either of the two sides in the film had been vaguely likeable then I would have enjoyed this more. Instead, protagonist included there isn't a single character in the whole hundred and five minute movie who I could stand, except maybe Jennifer's silent and masked chauffeur. There is a Tim Burton-esque vibe the film tries to build up, and it does this by throwing scenes of craziness at the viewer and hoping it will delight. Instead there seemed to be no soul to the film, I didn't understand character's motivations or reactions to events and I was left looking at what were certainly attractively shot scenes but ones lacking enough substance for me. The prologue is a case in point, a male model wearing high heeled shoes is murdered by Mr. Wallendorf as part of an elaborate photo shoot involving shoe firing cannons. It all looks good and sets up the notion that Wallendorf is cold blooded but it didn't really add anything. I guess Mrs. Wallendorf is handled better visually, a crazy woman whose mirror reflection talks to her while bathed in different coloured lights. As to Jennifer, she felt to me like Lydia from Beetlejuice, the character trying her best to be painfully kooky and different but who had motivations that were a bit stupid.

As I said, the film does look good and features some moments of bloody violence. The all girl criminal gang at the underground lair for instance delight in murdering the male security guards and drivers of the vehicles and places they rob. But this thirst for violence was off putting as they are just as bad as the Wallendorfs. I guess the viewpoint here is nihilistic, Jennifer wanting to see the world burn just for the sake of it, but it means the film has no heart. There are plenty of actors here, and a few outlandish sets, but mainly it is just the underground lair that features, with a bunch of other smaller throwaway locations. Despite this the film did look expensive, even featuring a soundtrack from musical legend Bear McCreary (The Walking Dead, Battlestar Galactica). 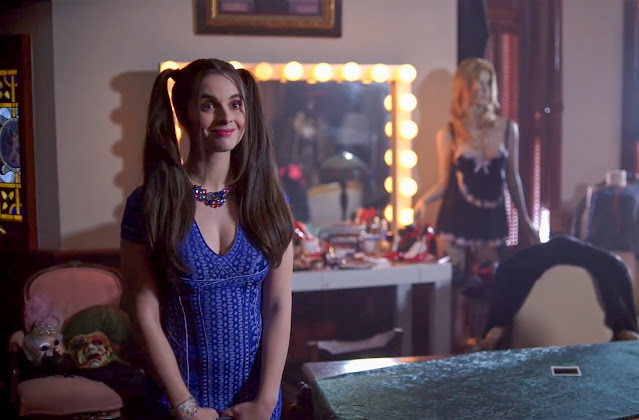