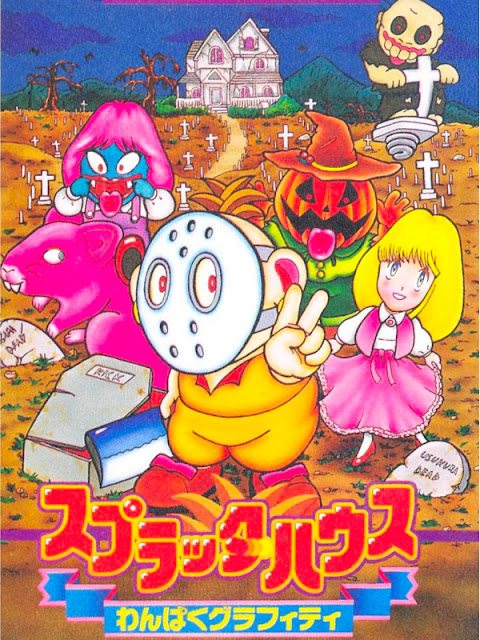 I have always been a huge fan of the Splatterhouse series of video games, it was Splatterhouse 2 in fact which was one of the key stepping stones that got me into horror films. While I have played all the more serious entries, including the flawed Splatterhouse 3 and the much maligned 2010 re-boot Splatterhouse, there was one game that until now had escaped my grasp, and that was the 1989 parody game Splatterhouse: Wanpaku Graffiti. This was not only the first in the series to be released on a home console (the NES) but had also been Japan exclusive prior to recently.

The game begins with Jennifer mourning at her boyfriend Rick's grave one dark night. Lightning strikes the grave and the hockey mask wearing Rick is miraculously resurrected. The first thing Rick sees however is lightning also striking the grave next to his, this resurrects the Pumpkin King, whose first order of business is to kidnap Jennifer. Rick must battle his way through eight levels of horror parodies in order to rescue her, but is everything as it seems? 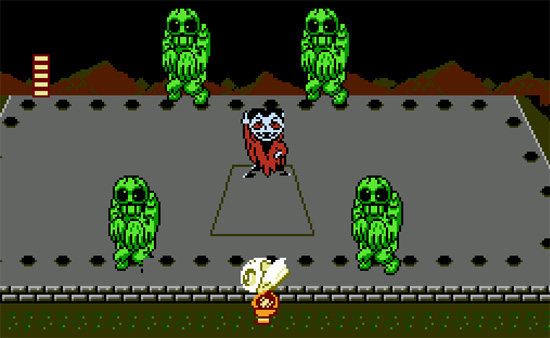 This was the second game in the overall series and quite a departure in terms of the super deformed graphics. Playing through this I was surprised just how much fun it was. The levels are very varied and forever throwing new enemies and situations your way while remaining distinctly Splatterhouse in style. Most the levels are split into smaller sections, with Rick in a variety of locations. Starting off in a graveyard, Rick's journey has him going through suburbs, through mansions, woodland, a lake, and even visits an Egyptian pyramid at one point.

The levels are full of monsters and insects, all of which have simple attack patterns and die in one hit. The variety of these enemies was pleasing, in the lake level for instance you are attacked by pink sharks, in the woods hanged men break free from their nooses, slime zombies rise from their graves in the graveyard, and various kitchen implements attack you throughout the mansion levels. Many of the levels feature mini bosses and it starts off fun enough with a dancing vampire and his zombies who is obviously a nod to Michael Jackson's Thriller. Another boss sees a man get into a teleporter with a fly, it was fun to see him emerge not as a fearsome human fly, but as a slightly large fly with a human face. Most bosses seem to revolve around afflicted humans, such as the first boss which is a possessed girl whose head flies around the bedroom, one that features a girl laying on a table as giant spiders burst out her stomach, and a young boy who turns into a werewolf. 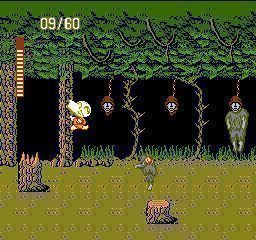 Sometimes the level design can be quite involved in that there are platforms to clamber around, and various doors to discover, elsewhere a few levels are far more basic and just require you to walk from left to right. Keeping with traditional Splatterhouse concepts there are branching pathways through some levels that determine what type of ending you get upon completion. The game was a lot easier than I expected it to be, I did use a rewind function on the version I played which obviously helped me immensely, but even if I had not had that ability I don't think it would have taken too long to get through this thanks to short levels and a password system.

I really enjoyed Splatterhouse: Wanpaku Graffiti and it was an absolute steal. I got it as part of the Namco Museum Archives Vol 1 collection on Playstation 4, this was made up of eleven different games and had been on sale for around £2.50, so it works out I paid roughly 22p to own this particular game! If you are a fan of the Splatterhouse series, or a fan of horror video games in general then this charming and varied parody game is well worth a play.