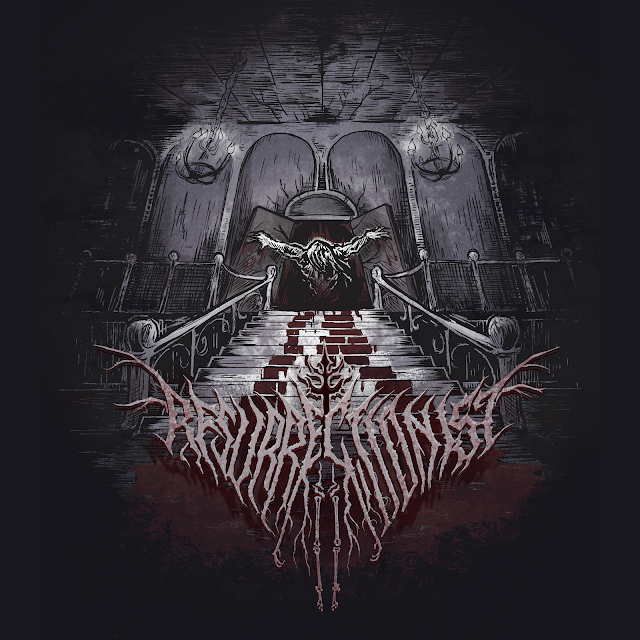 Resurrectionist is a new symphonic black metal project that comes from Chris Cozzi, a film composer whose past work has included scoring indie horror films. Resurrectionist is also the name of the debut album from this project. I always preface my reviews my stating I really don't know what I'm writing about when it comes to music, if I ever win the lottery I shall hire someone who does know to write these reviews. Some feedback received for the last album I reviewed, Vlimmer's Nebenkörper was that my compliments sounded almost passive aggressive so I will try and avoid doing that this time around!

This is a concept album, something I guessed at, though if I had read the album's bio beforehand I would have had that confirmed. I don't profess to having gotten the story being told, but basically this is a story about a doctor who thinks he has discovered the secret to eternal life. With an ill child and a terminally ill wife, the man decides to abandon traditional medicine and instead use the occult to aid. This plays out over eight tracks at seventy minutes. Several of the tracks feature Kakophonix from Hville I Kaos (Never Without the Pentagram, Black Morning, Winter Green) providing cello.

It opens with the near eight minute A Tale Painted Crimson, I quickly realised this was a similar genre of music that Cradle of Filth does, a good thing for me as they are one of my favourite bands. It has a Gothic sound to the music, while the singing is more akin to screaming lyrics, I don't know the term for that type of singing. By the end of the track there is guitar and drums chugging along but cohesively it all fits together.
Next is Brasov 1898 that features the cello. This seven and a half minute track includes relatively mellow sections where the lyrics turn to whispering. What was apparent was how musical this is, the music is heavy but it isn't a wall of noise, there is proper tunes to the tracks.
Following on from this is The Resurrectionist, the central theme to this seven minute track was really good. Being a concept album parts of the music and lyrical structure reoccur over different songs. This track includes spoken word segments and at one point nearer to the end some evil sounding group chanting.
The fourth track at the halfway point is Minotaur, this includes a spoken word part about summoning the titular monster.

Onto the second half of the album with the dirge like Somnambular Form Possession, again had some good melody to it. third from the end is Chimera, a restrained first thirty seconds devolves into some slow but thundering music that chugs along leading up to the fantastic penultimate track Abigail. This twelve minute song was my favourite of the album. Starting off with some more spoken word, the music almost comes to a stop at the halfway point and then it gets really good, more spoken chanting along with a simple repeating bit of music that sounded like chase music you would find in a horror film. This urgent bit of music comes and goes over the rest of the track.
Finally is the near fifteen minute Vrykolakas that started off as a piano led orchestral sound that leads up to a repetitive marching drum sound before changing back into the quiet piano for a slow finish.

Expecting something more soundscape like than what this turned out to be, I liked Resurrectionist, especially as the music was so enjoyable to listen to. The different styles of more classical style music combined with much heavier worked well, I enjoyed the mix, this is an album I would listen to again.

Posted by Daniel Simmonds at 11:27