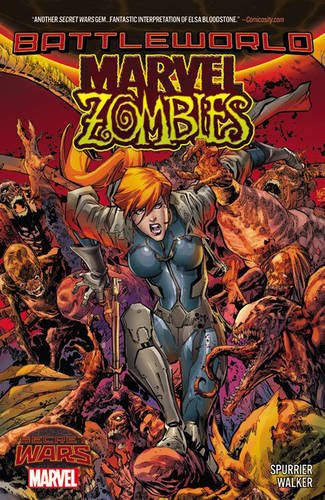 It was just last week when reviewing Marvel Zombies Destroy! that I stated I felt like it was a series of diminishing returns for each new entry in the Marvel Zombies series. I began to wonder if the problem were the books themselves, or if I was just jaded with it all. Now I have read Marvel Zombies: Battleworld I can confirm it was the former, as this one was a real return to form.

This takes place within the context of the Secret Wars arc. No idea about any of that but at least this begins with a page of text explaining things. Basically the multiverse has been destroyed and Dr. Doom was somehow able to create one giant world made up of different realities put together. Elsa Bloodstone is a member of S.H.I.E.L.D who spends her days on the Wall. This huge construct is what separates the zombie infested Deadlands from the rest of the world. One night she gets in a fight with a zombified Red Terror, she defeats him but not before he teleports them both over two hundred miles into the Deadlands. It is there she encounters a young amnesiac child, and with a horde of zombies in between her and the path back to the Wall, she instead decides to go with the young child's gut feeling that they need to head in the opposite direction, further into the unknown of the Deadlands. 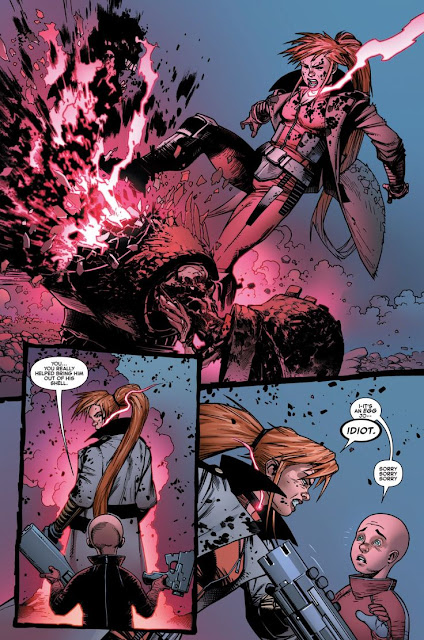 While not perfect I did really enjoy reading Battleworld, and with Elsa you have a strong willed protagonist. Before I have criticised the amount of humour stuck into a serious story, here though that humour fits in with Elsa's jaded outlook on life, and her grudging mission to keep the mystery child safe. Her journey is punctuated with frequent flashbacks to the harsh treatment she endured at the hands of her father, the immortal Ulysses Bloodstone. The flashbacks intercut the main story going on as well as her father's words appearing as speech bubbles. She is in constant battle with herself to ignore the teachings he gave her, she frequently has to go against her deep seated instinct to instead become her own person. The main plot may be her and the child's journey but Elsa's past experiences shape a lot of the story, especially towards the end with some unexpected and cool revelations.

It increasingly felt like the creators of these comics were running out of heroes and villains to use. The ones they did use always felt like guest appearances that felt the need to really explain to the reader who they were. It was cool then that zombified versions of characters appear here without any fanfare, early on Doctor Octopus, Juggernaut, M.O.D.O.K, Carnage and others all make their appearances without any indication as to who they are, just different zombie types for Elsa to casually battle in her journey. There becomes an antagonist of sorts with an undead version of Mystique who leads a group of more intelligent zombies, kept lucid by feasting on a Deadpool that they keep alive. It was cool to see heroes and villains again treated with semi-respect, rather than just being a tick-list of expectations. The fact that this all takes place on a world made up of many different realities also gives the opportunity to have more than one version of a character at any one time, again something that the story explores. This is thanks to Simon Spurrier who wrote this. 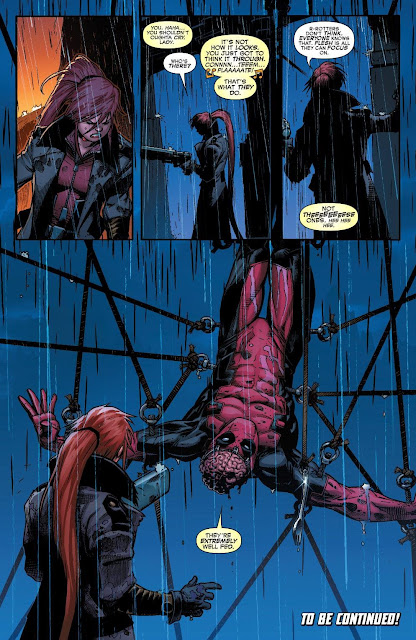 I thought the art by Kev Walker was fantastic, the zombies in particular looked wonderful, and there was no off putting moments of blood that looked like thick jam. My only issue was with the text, I assume this was done to appeal to general ages but there is no swearing here, instead there are a bunch of symbols whenever the potty mouthed Elsa swears, it was distracting, I wish they could have used actual swear words as it just looked a bit silly.

Marvel Zombies: Battleworld was a real return to form after a bunch of bland entries. I loved how they combined the multiverse idea with the undead, and the way they treated characters here, to give them more depth and thus make the viewer care about them more.