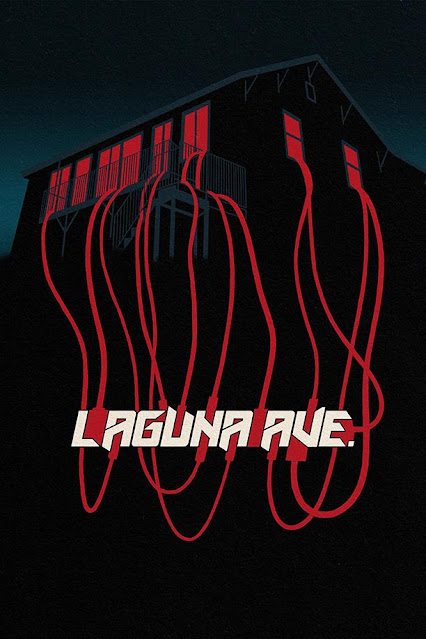 Laguna Ave is a hell of a weird film. Directed by David Buchanan and written by Paul Papadeas (in his sole writing credit), this low-fi indie sci-fi comedy horror mashup is a strange beast, but one that had a lot going for it.

Russell (Russell Steinberg - Adventureland) is an out of work slacker whose negative attitude is causing a strain on his relationship with girlfriend Rita (Stephanie Brait). After she goes away on business for a few weeks, Russell ends up getting involved with his mysterious new neighbour, Gary (James Markham Hall Jr. - The Rage: Carrie 2). This paranoid man shockingly reveals himself to be an apparent cyborg, and that he is being persecuted by a secretive global group that he reveals Rita to be a key member of. After Russell is given an implant and a new cybernetic hand (having previously lost his actual hand in an accident years prior), he becomes to believe that there may be some truth to Gary's words. 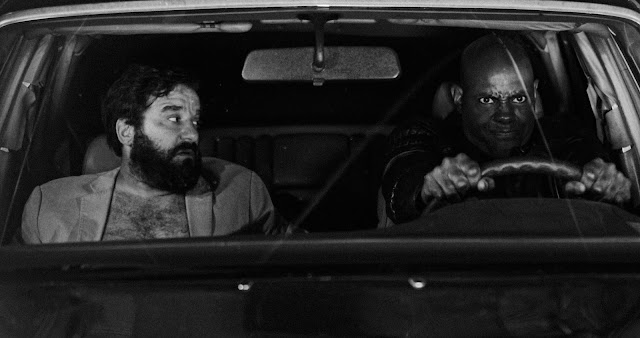 The whole film is in black and white and has a low tech vibe to the editing and the special effects, all purposeful. This has been described as a cross between Clerks, Pi, and Tetsuo: The Iron Man, I would also add The Matrix to that melting pot. Gary (with a scene stealing performance from Markham Hall Jr.) felt like a low budget stand-in for Morpheus, someone who reveals to the protagonist of the secret conspiracy behind the facadé of real life as well as offering an 'in' to the truth. The exaggerated way the actor played this character was a lot of fun to watch, this actor alone made Laguna Ave so much better than it may sound on paper. The cast all complimented each other, and were all suitably weird in their own ways, such as Russell's neighbours Pierre (Dan Crane) and Dusty (Jeff Hilliard - Frankenstein).

For the first half of the movie things are strange, yet relatively normal, but when things take a hard left turn into paranoid sci-fi I was impressed with how non abrasive this shift was, it all felt like a natural incline rather than a wild shock. It was also cool how the story straddles the line between everything Gary is saying being true and him just being plain crazy. The viewpoint shown is neutral, such as if all the people apparently monitoring the duo are actually doing so or not, while it is indisputable that the implant Russell gets does give him powers to control objects, even if his new cyborg hand is comically huge. The flip side, Gary's 'cyborg' implants are laughably bad looking, he appears to have random wires, earphones and circuit boards taped to himself.
There was a trippy vibe maintained throughout, such as a scene with Russell on L.S.D, and the frequent visions he has of himself covered in corpse paint throwing 'devil horns' with his cybernetic hand, sitting on a throne, while Rita dressed in PVC worships him, in some type of future Apocalypse. Edited in between scenes are slightly arthouse style sequences of images, such as computer text and nuclear bombs exploding, these all add to the bizarre vibe very well. 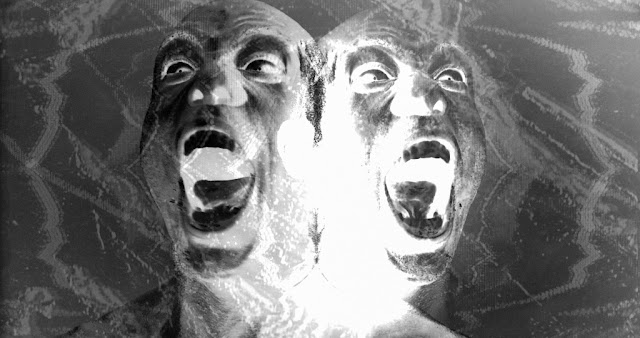 Laguna Ave may be low budget but this works in its favour, the off kilter story coupled with the low-fi quality and dark humour made for a memorable film, while Markham Hall Jr. is just wonderful throughout. Laguna Ave is released exclusively on the Arrow streaming subscription service on February 1st.